“Pacific Rim” is the quintessential mindless summer sci-fi action film and while it’s successful in that respect, it’s also disappointing because it could have been so much more.

In the near future, while we’re anticipating an alien invasion from the sky, massive monsters called Kaiju surprise us by arising in the Pacific Ocean. The first attacks are devastating, but eventually, mankind builds weapons that can beat them, the enormous Jaeger robots. The machines are operated by two pilots who connect to each other by “drifting” and establishing a neural bridge. Together, pairs of pilots keep the Kaiju invasion under control for years – that is until bigger and more vicious monsters begin arriving at an increasing rate.

Raleigh Becket (Charlie Hunnam) is a star Jaeger pilot alongside his brother, Yancy (Diego Klattenhoff), but when a Kaiju attack leaves the duo broken and their Jaeger severely damaged, Raleigh calls it quits. Five years later, the Jaeger program is at an all-time low, consistently losing robots and pilots, and failing to keep the Kaiju from demolishing cities. With so few operational Jaegers left, the program’s commanding officer, Stacker Pentecost (Idris Elba), must put them all to work. Trouble is, one is an older model and he needs a pilot familiar with the machine to handle it in combat and Raleigh is the only one left that fits the job description.

“Pacific Rim” is loaded with epic battles and stunning visuals, just as the promotional campaign suggests, but what makes it stand out from the lot of films that overload on grand scale destruction is the fact that the story has a number of notably curious and thoughtful plot details.

The film grabs your attention in minutes thanks to a highly effective combination of voiceover and news clips, helping to catch you up on the war from the rise of the Kaiju to the current predicament. While it is outrageous to think invaders could open a portal deep beneath the Pacific, the fact that the scenario is rather fresh compared to films featuring attackers breaking through the Earth’s atmosphere, makes it more appealing and, therefore, easy to adapt. The same is true of the Jaeger program. The idea of massive robots battling gigantic monsters feels more like the fantasy version of how man would react to such a problem, but again, it’s so different and the details are well supported enough that you don’t need much convincing; you want to follow along and believe.

In “Pacific Rim” trouble primarily comes in the form of undeveloped and unconvincing characters. The opening sequence with Raleigh and Yancy isn’t just a thrill, it’s emotional, too. But from that point on, Raleigh is merely your typical top fighter who has a problem with authority. It’s fun to watch him fight, but as far as pure drama goes, Raleigh fizzles out entirely and largely because much of the emotional arc that follows depends on his relationship with his new co-pilot, Mako (Rinko Kikuchi). She suffers from familiar wartime character woes. She’s the best candidate to join Raleigh in the Jaeger, but a personal vendetta against the beasts makes her too emotional. Even after getting a look into Mako’s past, there just isn’t anything unique to latch onto. And then of course, when two dull characters come together, the effects of that relationship are doomed as well.

Charlie Day and Burn Gorman go big as Dr. Newton Geizler and Dr. Hermann Gottlieb, often to the point of being rather grating, but their characters share a charming connection and offer up the large majority of the plot’s most intriguing elements. Max Martini and Robert Kazinsky have a nice effect, too, but not necessarily because they’ve got anything particularly novel to offer, rather because they take what they got and truly sell it. They step in as the Hansen brothers, another team of Jaeger co-pilots. Naturally, Raleigh needs a non-believer and enemy of sorts, so Kazinsky’s Chuck fills that void as you’d expect, but the convincing brother bond he shares with Martini’s Herc makes their missions in the Jaeger exponentially more compelling.

While the action is generally entertaining in and of itself, it’s also very easy to lose your bearings. Del Toro makes use of an exceptional color palette that gives just about every frame of the film, particularly the Jaeger and Kaiju battles, a striking quality, but it still doesn’t make it any easier to follow all the action. The large majority of these fights are in the black of night, but peppered with neon flares of color that do often function as points of reference. But unless you’re paying close attention, it’s still easy to lose track of who’s hitting who, where those punches, bites, and stabs are landing, and occasionally, even who’s winning. However, del Toro does always manages to orient the viewer when necessary to ensure all Jaeger victories produce fist-pump worthy results.

“Pacific Rim” is 131 minutes of popcorn movie summer fun, and while that does mean it’s a blast to watch, it’s also unfortunate because there are many sure signs that the film could have gone above and beyond that. The running time would undoubtedly balloon, but more layers for Stacker, Mako, and Raleigh, a deeper look at the technology and effects of “drifting,” and how the Kaiju invasion effects civilians could have put “Pacific Rim” on another level. 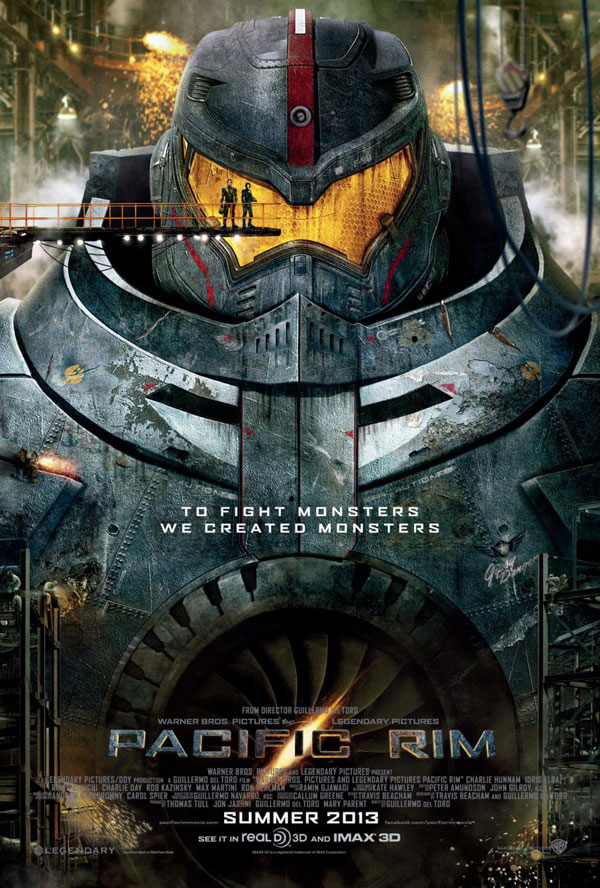