Nice ribbons of naturalism and even poetical idyll root “Beneath,” a sort of lake-set “Jaws” homage, before an unconvincing turn toward “Lord of the Flies” territory and even more unconvincing acting conspire to sink the low-budget indie horror offering. Director Larry Fessenden’s nice use of limited resources and superlative, artful evocation of mood are in the end no match for a screenplay that mistakes and substitutes volume for well staked-out, compelling interpersonal disagreement.

The story’s familiar set-up finds a group of a half dozen teenage friends celebrating their recent high school graduation before they all head their separate ways. Johnny (Daniel Zovatto) is still crushing on ex-flame Kitty (Bonnie Dennison), who’s now dating Matt (Chris Conroy) but may have also recently hooked up with Matt’s younger brother, Simon (Jonny Orsini). Also along for the ride are Deb (Mackenzie Rosman) and Zeke (Griffin Newman), the latter of whom is the obligatory would-be/future filmmaker who incessantly films his pals. (Though “Beneath” isn’t explicitly a found-footage flick, it does incorporate some material from the point-of-view of Zeke’s camera.)

Johnny halfheartedly leads his friends out across a lake, even after a friend of his grandfather, Mr. Parks (Mark Margolis, of “Breaking Bad”), ominously lectures him about respect for their environment. When some of the group jumps in the water for a relaxing swim, it attracts the attention of a large, rather gnarly underwater predator who seems disinclined to leave them alone. A couple lost oars and a sprung leak later, these so-called friends start to turn on one another.

If the material had a bit more spin, “Beneath” might have the capacity to evolve into something interesting. But the script, by Tony Daniel and Brian Smith, doesn’t think much at all of its female characters, and the points of friction between the characters and indeed most all of the dialogue trend toward the stupid (“I will not let that thing control us!” screams one guy after the killer fish has already been manifestly controlling their behavior for a while). Additionally, the acting just isn’t that strong; if the characters are flatly written to begin with, the actors almost all opt for one-note agitation that leaves the movie with little room to naturally escalate in tension.

The saving grace of “Beneath” is its technical package. Fessenden (“Wendigo,” “The Last Winter”) does genre with great style and feeling, so the film’s first act has a woozy hold, no matter the narrative familiarity. Filmed on location in Naugatuck State Forest in Connecticut, Fessenden and cinematographer Gordon Arkenberg make great, smart use of creative framing and a couple aerial shots to convey spatial isolation, the relative speed of the fish and the overall desperation of the teens’ plight. The creature effects, by Fractured FX, are also good, considering the film’s budget.

Overall, “Beneath” still slots perhaps a notch higher than a lot of similarly-minded SyFy Channel fare, but its utter lack of any deepening intrigue marks its last hour a wearying slog, full of only lots of yelling and splashing about. Viewers will be rooting for some sort, any sort of twist, in concert with the fish.

NOTE: In addition to its theatrical engagements on July 16 and 17, “Beneath” is also available across a variety of VOD platforms. For more information, visit www.BeneathTheWater.com. 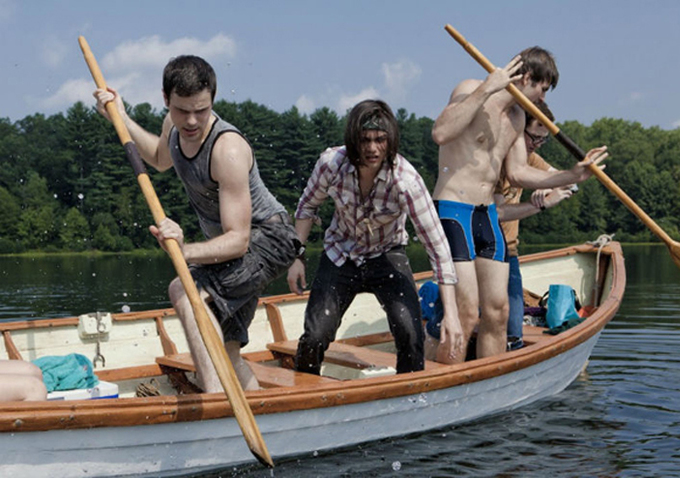