Along with rabble-rouser Lars von Trier, Danish filmmaker Thomas Vinterberg was at the forefront of the influential Dogme 95 movement, an austere cinematic experiment which eschewed not only special effects and technology, but also a lot of other modern conventions. Since then he’s branched out and made different types of movies; his latest is the well received “The Hunt,” starring Mads Mikkelsen as a day care teacher wrongly accused of child sexual abuse. For ShockYa, Brent Simon recently had a chance to speak to Vinterberg one-on-one, about his hippie commune upbringing, his new film and its in-competition premiere at the 2012 Cannes Film Festival, what he now thinks about Dogme 95, and what’s on deck for him professionally. The conversation is excerpted below:

ShockYa: In the United States in the 1980s — and in Kern County, California, in particular — there were a number of cases in which daycare workers were falsely accused of the sexual abuse of children. Did these real-life incidents influence your development of the script for “The Hunt”?

Thomas Vinterberg: Oh definitely, the whole thing started with a guy giving me a pile of newspaper articles of cases. It was this children’s psychiatrist I didn’t know who knocked on my door and asked if I (directed) “Festen” (“The Celebration”) and I said yes, and he said, “Well, there’s another film you have to do.” So I read all these files, and throughout the production of this movie we did a lot of research of all these cases. Of course this is a drama so it’s fiction and in many ways it’s the airplane version of real life. They often end much more gruesome, and with much more injustice than in this one, but we definitely were inspired by real cases and there were unfortunately many from which to pick.

ShockYa: It’s a subject that definitely awakens strong impulses in people, but I was shocked (in real life) by the leading nature of the questions often posed to these children. In your research, did you find that was a baseline or common thread in a lot of these incidents?

TV: Oh yeah. And in fact the interrogation scene in our movie is a mirror or copy of a real interrogation, only with some far too leading questions removed, because they would have seemed absurd. But you wouldn’t believe what people had been saying to these kids. And one of the reasons I made the movie is because these children end up believing what really happened — added memory, it’s called — and they end up in similar means to those who’ve actually experienced things like this. So it’s a violation of these children, in a way, because it does truly (victimize them).

ShockYa: A national dialogue over sexual abuse seems to have evolved over the last 10 or 15 years in the United States. There have been celebrities and others who have spoken out and opened a discourse, really removing some of the stigma. What wash the reaction to the film in Denmark, since it’s already opened there, and did it change people’s comfort level in discussing this issue at all?

TV: There was a very strong reaction. It was the kind of film that moved from the cultural pages of the newspapers to the debate and op-ed pages, because of course it didn’t awaken a discussion about who to believe in this. So it was top of the news for a week or so. (laughs) It is disturbing, this issue, because we all know that these things appear, we all know that there is abuse of children happening, but now we know that there’s a lot of hysteria as well. Denmark is a small country, so it will be smaller numbers, but last year we had 50 teachers being accused (of sexual abuse) and one was guilty. So you had 49 marked people walking around having to leave their homes and jobs without having done anything. So I think what we tried to do with this movie, in a way, was also describe a certain loss of innocence. I grew up in the 1970s in a hippie commune and was surrounded by genitals, and it was kind of not a problem for anyone. And if I was weeping at school the teacher would put me on his lap and hold me, right? That’s Scandinavia in the 1970s, and there was no sexual abuse in my upbringing at all. Nowadays this is just not possible. Things have changed and a lot of anxiety has seeped into place, and unfortunately there’s a good reason for it. We’ve learned that there’s abuse of children, and so we’re trying to figure out a way to deal with these things, what is acceptable and what isn’t.

ShockYa: Apart from physical pain I can hardly imagine anything worse than being falsely accused of child abuse, and for this reason the film inspires a very strong sense of identification (with Mikkelsen’s character). But it could have been differently constructed, as more of a mystery, let’s say — something along the lines of “Oleanna,” I guess.

TV: We had to make a decision early on while writing the script as to whether we wanted to be in doubt as to his guilt or not, and I felt that (doubt about that) was slightly conventional. That is part of the nature of drama — that (films) play around with the audience like that — but I felt like there would be a distance between the audience and the main character if we did that. I wanted to emotionally dive in and completely devote myself to this character, and therefore I needed to know that he was speaking the truth all the way. Having said that it was a challenge all the way through because people expect us to play around with them. So every time we made a low-angle shot on Mads, or his glasses were a bit too steamy, he started to look a bit too much like a pedophile, so we had to change the set-up.

ShockYa: “The Hunt” was the first Danish film to play in competition at the Cannes Film Festival in many years. What was it like returning with a movie in the main competition?

TV: It was great to be back in Cannes. I’ve been there every year, as either a juror or part of the market, but being back as part of the competition was of course a honor. It was also a mirror for me, in a way, in that I’ve been experimenting over the last 10 or 15 years and am very proud of that, but am also coming back to who I am now and who I was to begin with, and that seems to be being celebrated. So I guess I learned something from that as well.

ShockYa: You mentioned experimentation, and we’re coming up on the 20th anniversary of Dogme 95, only a couple years away, I guess. What are your thoughts on it, in reflection?

TV: I look back at Dogme with pride, and sometimes even longing. (laughs) It was a great moment, and a great thing to be part of. It was meant to be a risky, revolting, arrogant, playful reaction against the conventions of filmmaking. And the explosion in 1998 (of Dogme films) in Cannes made it a huge success, and very quickly it became its own convention — and it became fashion, I guess. And digital cinema suddenly became possible, and it created quite a bit of impact, which I’m really very proud of. But also, for me, it became less risky because it had proved itself a success. So the risky part disappeared and I had to move on from there, and I think we all had to. Looking at where we are now, I think Dogme’s over — it was something in the ’90s that enlightened a lot of people, and especially ourselves.

ShockYa: What are you working on at the moment?

TV: At the moment I’m working with Fox Searchlight on an adaptation of Thomas Hardy’s “Far From the Madding Crowd,” with Carey Mulligan and Matthias Schoenaerts, from “Rust and Bone.” I’m very excited about that; we’re in pre-production and hoping to shoot in September. And then I’m working again with Tobias Lindholm, the writer of this and the director of “A Hijacking,” on a script about the commune I mentioned that I grew up on. I’m excited about that too, and hope to shoot that next summer. And then I’ve been writing a play too — I’m actually working with the National Stage in Vienna, and have written a play about drinking which may also end up as a movie. So there are a lot of things going on. 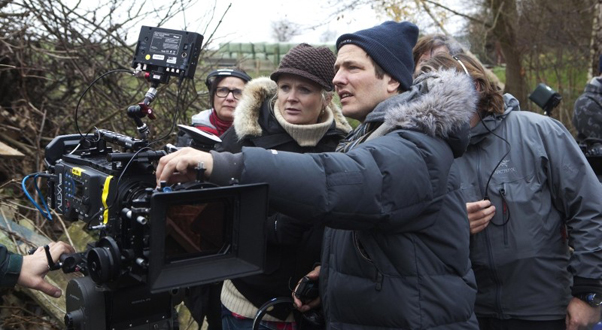