Its title a slur for Northerners who opposed the American Civil War, “Copperhead” marks the third film from director Ron Maxwell (“Gettysburg,” “Gods and Generals”) about the United States’ bloodiest armed conflict. In theory, movies like this produced outside of the Hollywood system have the potential of some measure of additional freedom, being unburdened by casting dictates and endless studio notes that often polish down history’s rough edges. Unfortunately, in reality, Maxwell’s film is a drawn-out, schematic melodrama rife with somnambulistic speechifying, and a work every bit as turgid and baldly sentimental as the centerpiece lecture at a convention of historical reenactors.

Based on a novel by Harold Frederic, “Copperhead” unfolds in upstate New York, telling the story of Abner Beech (Billy Campbell, who replaced Jason Patric three weeks into shooting), a stubborn and morally righteous farmer who defies his neighbors and government in the bloody, contentious autumn of 1862. Beech loathes slavery but is also against the war, on the grounds that he finds it unconstitutional. This puts him at odds with abolitionist Jee Hagadorn (Angus MacFadyen), who in turn turns many of the townspeople against Beech. Things are even more complicated by a love story involving their respective children, Esther (Lucy Boynton) and Jeff (Casey Thomas Brown).

With a score that even the most ardent PBS aficionado would find too flowery and precious, “Copperhead” unfolds as a series of moralistic theorems and poses filtered through characters defined chiefly by their at-odds natures. Author Bill Kaufman, delivering his first adapted screenplay, serves up an endless parade of soliloquies most often delivered in solemn, stately hushed tones, like the entire film was some dinner theater piece. It’s no great knock that “Copperhead” doesn’t follow some of its sons out into battle, choosing instead to smartly allocate its resources in examining how war and loss rips apart this previously close community. But the movie does it in such a plodding way as to invite more yawns than sympathy.

Campbell finds a bit of fleshed-out sadness around the edges of Abner, but MacFadyen for some reason goes the bug-eyed route. Other younger actors, too, seem out of their element. “Copperhead” may have its head in the right place, but Maxwell’s movie is dry and inert — a historical drama that even hardcore history buffs will have a hard time convincing themselves is worthwhile. 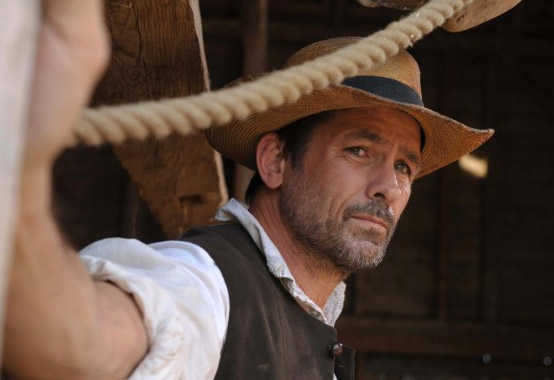