Filmic evidence of both mankind’s folly and its boundless capacity for thrill-seeking still connected to the natural world, “Storm Surfers,” presented in 3-D in select theaters but also available in regular 2-D, offers up a look at surfing legends and best friends Tom Carroll and Ross Clarke-Jones. Narrated by Toni Collette, somewhat ironically for such a “Fire in the Belly”-type work, this gorgeously lensed affair is one part “Redbull cinema” (okay, maybe one-and-a-half) but also one part fraternal rumination, buoyed by the maturity and rootedness of its subjects.

“Storm Surfers” unfolds in and around Australia, homeland to the aforementioned pair. With the assistance of surf forecaster Ben Matson, Carroll and Clarke-Jones track and chase giant storms in their effort to ride some of the biggest and most dangerous swells in the Pacific Ocean, dropping in via jet skis. Their quest leads them to Shipsterns Bluff, an isolated region near the southeastern tip of Tasmania. There, Carroll tries to get back on the board — literally and metaphorically — after an extended absence from pipeline surfing.

Co-directors Justin McMillan and Chris Nelius do a good job of blending their film’s action footage with interview segments talking about talking about inner motivations and explaining the ins and outs of certain set-ups, although from a certain perspective “Storm Surfers” could use a bit more familial mooring. When Carroll talks about he and Clarke-Jones, both well into their 40s, passing through the stages of life together, with “wives and kids and all that,” it begs the question: wait a second, where are they again, and what exactly do they think of what you do?

The film’s visual bona fides, however, are never in question; its cinematography is exquisite, providing you-are-there thrills by putting viewers right inside the barrels of waves along with its subjects. Cameras are mounted actually on the surfboards and jet skis, and the directors make use of helicopters — already part of the safety and oversight crew — to provide aerial perspective. At the third annual International 3-D Awards, “Storm Surfers” picked up the Outstanding Achievement in Documentary prize, besting “Katy Perry: Part of Me” and the James Cameron-produced “Cirque du Soleil: Worlds Away,” among other movies.

Its specificity may preclude certain general audiences from seeking it out, but “Storm Surfers” does devote time to cultivating a message that resonates beyond the X-Games subset. Find your bliss, it tells viewers. Such pursuits fill up the soul.

NOTE: “Storm Surfers” opens in Los Angeles at the Chinese 6 Theatres, but also enjoys an exclusive two-night run at the Aero Theatre in Santa Monica, July 20 and 21. To view the movie’s trailer, visit http://www.youtube.com/watch?v=pW_eIeKyjSo. 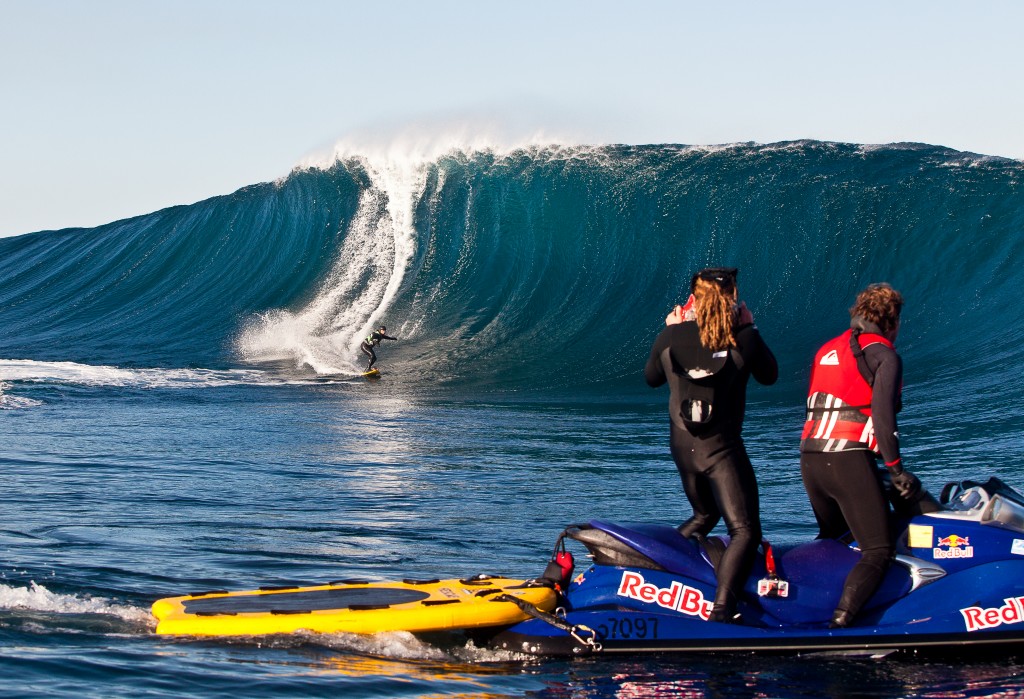