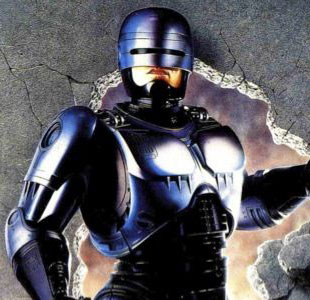 After some alleged bumps in the road during production and a release date shift, “RoboCop” is finally making its way into theaters on February 7, 2014, and in honor of the upcoming release, Sony is bringing it to Hall H for San Diego Comic Con.

We’ll have all the latest as it comes in, so don’t forget to keep refreshing this post to ensure you’re following along in real time as the panel progresses.

5:09 The panel opens with a clip – a message from Samuel L. Jackson. It’s commercial for robots patrolling the streets in Teran. He’s furious that Americans are “Robophobic” and then we cut to material in the states with Michael Keaton’s character who’s having a discussion about these very robots. Then it jump back to Teran where the seemingly organized and successful situation blows up in Jackson’s face with the robots firing at innocent civilians. Before concluding, the piece jumps back to Keaton who admits that the robots feel nothing. Even if they were to murder an innocent, they’d feel nothing.

5:16 – Jackson calls Pat Novack “Rush Sharpton,” a guy with an opinion who isn’t afraid to state it and will do whatever he has to to get people to believe it.

5:17 – Kinnaman says his character doesn’t die. He’s amused from the throat down. Over the course of the film he has an internal battle with the AI and his own soul or humanity. That was the challenge for Kinnamn.

5:17 – Cornish says the idea of love, marriage, and having a child ground the film. She says it was kind of nice to play a woman who really caught for a man.

5:18 – Footage time! Keaton says people want a product with a conscience, something that knows what it’s like to be human. Alex Murphy’s car alarm goes off and explodes with him nearby. Then it cuts to Keaton’s Raymond Sellars saying, “We’re gonna put a man inside a machine.” Alex goes into surgery and Gary Oldman’s character explains that if he survives, he’ll be confined to a wheel chair. From there, we go back to Keaton who’s helping design the look of the robot. The Alex/RoboCop comes in – it’s much like the original design, but sleeker and black with glowing red eyes. There’s a black and white shot, seemingly from RoboCop’s perspective, of cops invading a hallway and loads of heat sensor imagery. Eventually Cornish’s Ellen Murphy stops RoboCop and insists that she knows Alex is still inside. A doctor character notes, “Somehow he’s overriding the system’s priority.” A powerful trailer!

5:25 – It’s time for the audience Q & A. Padilha points out that if a cop shoots an innocent victim, that cop can be taken to court and/or reprimanded, but a robot can’t be held accountable.

5:28 – Keaton says technically his character isn’t a villain, rather an antagonist. He calls the role complex because he didn’t want him to be a cliche bad guy. He calls him mentally healthy, but whether you agree with him or not is another issue.

5:30 – Last question. Was the purpose of the story to show that technology should be feared? Padilha says that at the end of the day, you should never fear the gun, but the guy holding the gun and it’s similar with technology. But he also points out that that means we should be concerned about technology and that his movie addresses this concept in a big and fun way. He also says technology will meet living beings soon enough. More and more we have interventions with people putting chips in brains to recover vision, so RoboCop is in a prime position to address that.