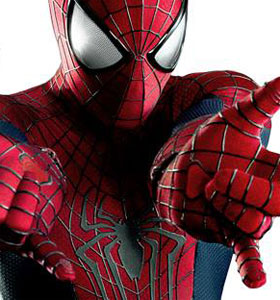 Ready for one of the most highly anticipated panels of San Diego Comic Con 2013? We’re here in Hall H for the Sony & Screen Gems event and they’re about to wrap up the show with a presentation for the May 2, 2014 release, “The Amazing Spider-Man.”

Keep reloading this post for a play-by-play of the full presentation.

5:25 – Are we kicking things off with some footage? The screen is black and there’s this building tone or rumbling sound. People are cheering. Something got to burst soon. It’s been about a full two minutes now. Screens on the side of the main screen are revealed! The rumbling increases. The sides screens wrap around the room! Finally smoke and web slinging everywhere and the reveal of the Spider-Man logo.

5:35 – Out comes director Marc Webb, producers Matt Tolmach and Avi Arad, and stars Dane DeHaan and … “a special treat,” Spider-Man! But wait, where is he? They say he’s outside and run a video with Spider-man running around San Diego Comic Con. Andrew Garfield is in the costume and is begging security to let him into Hall H. They won’t so he slings his way up and inside. The video stops and Garfield, dressed as Spider-Man, comes in through a side door.

5:40 – Gardfield is sitting on stage and talking, but in a complete Spider-Man getup. His name card doesn’t even say Andrew Garfield, but Spider-Man.

5:41 – And now Garfield is answering questions as Spider-Man. He says SDCC is the only place he feels normal because hit fits in.

5:42 – Emma Stone couldn’t be here so send a video message from France where she’s shooting a film. The video cuts out. Something isn’t right. There’s whistling. It’s black. Then … electricity! In a dark, booming voice, Electro lights up the screens and Jamie Foxx comes out.

5:48 – Spider-Man says he has to go and really has to use the bathroom, so leaves the stage.

5:49 – Foxx says it’s extremely fun to play a villain because you don’t have to color inside the lines. He recalls getting the call for the gig while his own daughter was having a Spider-Man birthday party. His daughter told him that Spider-Man would kick his a**.

5:50 – Foxx says that when we meet Max, it’s his birthday and even his mother doesn’t remember. You immediately see that he’s in a hole, so when he becomes Electro, you understand where all of his venom and malice comes from.

5:52 – Webb says that in the first movie he had to retell the original and once that was done, it was exhilarating. At the beginning of this new movie, Spider-Man is having fun being Spider-Man. But, of course, when Spider-Man gets cocky, Electro arrives to teach him a lesson.

5:51 – Here comes the footage! Webb notes they just finished filming three weeks ago, so the piece isn’t complete and contains some storyboards. The video rolls and begins with a city shot. There’s a truck being chased by cop cars. Spider-Man jumps on the cop cars and rides them towards the truck. He reaches into the window and stops the driver. There’s a scene with Aunt May. They argue about doing laundry and bleeding colors. Peter blames it on washing a flag. Back to the action – Spider-Man saves Max and they have a brief interaction. Spider-Man has some fun webbing an assailant and pulling down his pants. Thins are getting tense for Max and he says he wishes he could be like Spider-Man. Mary Jane says she likes Spider-Man, but loves Peter more. Inside a lab, Max is electrocuted. He falls into a tank of eels and is zapped until the tanks breaks. Max stumbles into the street in a hoodie and lifts his head to reveal his new glowing blue look. The piece eventually explodes into a sequence of Electro attacking Times Square with lightning bolts. The city blacks out and then there’s a massive explosion. The footage wraps with Spider-Man catching a flying cop car before it crushes a man and he asks, “Need a hand?”

5:57 – The lights come back on and Andrew Garfield is there. He apologizes for being late.

6:00 – Audience Q&A time and in comes a question about Spider-Man’s sexuality. Garfield explains that Spider-Man stands for everyone. He thinks it would be illogical and it wouldn’t make sense if in the third movie, “I was with a black guy.” There’s an awkward moment between Garfield and Foxx and the audience erupts. More seriously, Garfield continues, that the beauty of Spider-Man is that he’s completely covered, so no matter what is underneath, he’s just a hero.

6:04 – Someone dressed up as Superman and says he’s an aspiring actor, but can’t balance that and school. Garfield replies by pointing out that life is tough and high school is the worst part of it. He tells the kid that he’ll get through it, so he just needs to stick with what he’s passionate about.

6:00 – DeHaan says that in this film, Harry and Peter are childhood friends, but Harry gets sent to boarding school and cuts off his entire life before boarding school. When they graduate high school, it’s time to come home and he has to reconcile his relationship with Peter for the first time in a while.

6:10 – Webb explains that they grabbed from all the different comics. Webb is a big fan of the Ultimates, but there are loads of people and material that impacted how they approached the characters and story.

6:12 – Someone demands Carnage in Spider-Man 3 and then asks about all the characters in round two. Are there too many characters? The audience cheers. Webb replies that “There’s just the right amount of stuff in it, obviously.” He insists the main villain is Electro and says Paul Giamatti makes an appearance. He calls Electro an incredibly powerful villain that will sustain the depth of the film. He calls Electro “god-like.” He poses the question, how do you fight a guy that can disappear into an electrical socket?

6:14 – In regards to the Electro outfit, Foxx says you want to be true to everything, but you need to move forward, too. The way they crafted Max and Electro is rugged. Max isn’t worried about what he has on, he just wants to get to this guy and make him pay.

6:16 – Avi Arad says, “Loyalty to the character is loyalty to the fans.” He adds that what Stan Lee thinks is just as important, too.

6:17 – What storyline in the comics would you like to see in a movie? Garfield says he wants to see Spider-Man with The Avengers. The audience erupts.

6:18 – Final question. What’s the first time you met Stan Lee? Garfield says it was like being in a room with Mickey Mouse because he’s so iconic. It was hard to believe he really existed. He added, “I just turned into a black hole of a person.”

6:20 – And that’s that for “The Amazing Spider-Man 2” and for the Sony & Screen Gems panel. Keep an eye on ShockYa for some interviews with the talent attached to the films coming soon!