Title: Under the Bed

An indie horror flick that debuted at the Fantasia Festival last year and made the rounds at a number of genre fests, the suburban-set “Under the Bed” unfolds with a nuance and relative level of sophistication that belies its generic title, before eventually succumbing to a haphazard, poorly explained explosion of gore at the hands of a nasty creature hell-bent on terrorizing a pair of brothers. Directed by Steven C. Miller, the movie is for much of its running time quite engaging, and plugged into a sense of clammy unease, but unfortunately pays off its story in familiar, uninteresting ways.

The film opens with Neal (Jonny Weston, of “Chasing Mavericks”) returning home from a two-year exile with his aunt in Florida, following some hazy bad events that have left his family, and various townsfolk, still on edge. His dad Terry (Peter Holden) has taken a new wife, Angela (Musetta Vander), and is eager for his fractured family to become whole again — even if he’s clearly not certain how to best help bring that about. Neal has always been close to his little brother Paulie (Gattlin Griffith), who is heartened by his return. And whatever the “party line” is regarding what happened to Neal, Paulie knows the truth, because he too has been visited and tormented by the same nocturnal menace. With no one else to believe them, can the brothers band together to defeat this monster?

Eric Stolze’s script scores early points for the manner in which it nibbles around the edges of something darker, drawing a viewer in by hinting at reasons for this and that. It’s invested in all the human relationships, to a heartening degree. (In an interesting way, the movie plays not unlike a sequel, with oblique references to events surrounding the death of Neal and Paulie’s mother.) And the film’s good performances (particularly Weston and Griffith, who have a very good rapport) are aided by heightened arguments (“You don’t get chances, you earn them!” yells Terry at one point) that really feel like honest extensions of legitimate parental frustration rather than telegraphed, plot-point conflict.

But somewhere in its second act the wheels pretty much come off for “Under the Bed,” and the less-is-more approach eventually yields to a more-is-more tack, wherein characters indiscriminately start getting their necks snapped and heads popped off, seemingly if for no other reason than to showcase the movie’s effects budget. Unresolved narrative strands abound; what could be a tension-inducing dissolution in trust from Angela gets chopped off at the knees, and there’s a bit of flirtation between Neal and his neighbor, Cara (Kelcie Stranahan), that doesn’t seem to much go anywhere. And the entire motivation of and solution to killing off this lingering skeletal boogeyman unfolds in a bundle of wild, yelled speculation.

Composer Ryan Dodson’s obliges these yawning instincts, bending from intriguing moodiness to conventionally clamorous aural declarations. And Miller’s direction, heretofore so artfully restrained, sags to indulge in flat, schlocky stagings of typical horror mayhem. In the end, “Under the Bed” doesn’t pay off its set-up in deeply rewarding fashion. Still, it confirms a certain talent in Miller and his cast, when they’re given shaded, interesting material with which to work. 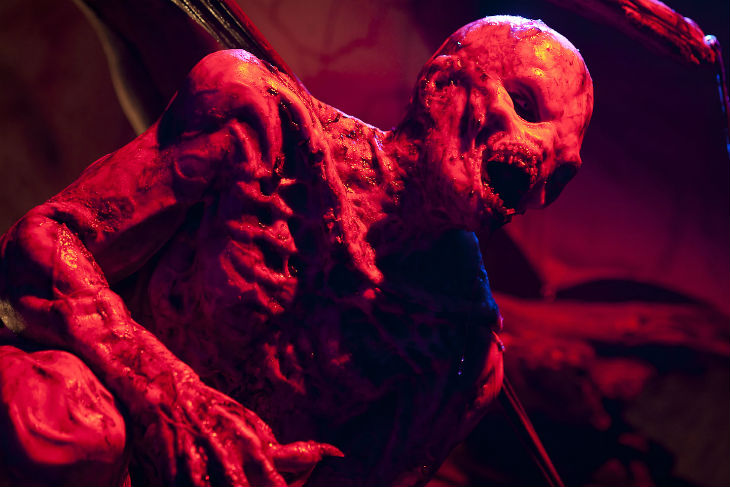