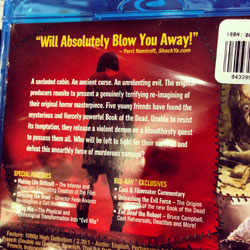 Call it a shameless plug, but ShockYa.com made a point of covering the “Evil Dead” DVD and Blu-ray at San Diego Comic Con not only because we adore the film, but also because our praise for director Fede Alvarez’s hypnotic display of carnage is branded on the back of every single DVD and Blu-ray in circulation.

In case you missed it when it hit theaters back in April or, even worse, never experienced the 1981 original, “Evil Dead” involves a group of friends who head out for a relaxing getaway at a cabin in the woods, only to be tormented by an evil force with twisted intentions. In the 2013 iteration specifically, the trip is arranged in support of Jane Levy’s Mia. Having suffered through a bout with drug addiction, her friends insist that this little escape will get her clean once and for all. And perhaps it would have worked had something far more malicious than drugs not slipped its way into Mia’s system.

We got the chance to get a quick sound bite with Alvarez and Levy while the duo celebrated the home release at SDCC. You can check that out below and if that’s not enough, our interview with the cast from SXSW is up and running and, of course, now you can watch the full film anytime and anywhere you want, too.