SDCC 2013: Kat Graham Discusses Life On The Other Side Of The Vampire Diaries Vale 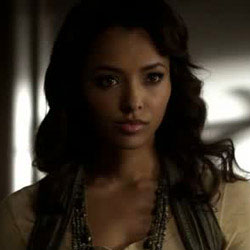 For those of you who are not caught up on “The Vampire Diaries,” beware; there are some MAJOR SPOILERS in this article and video. You have been warned!

While at San Diego Comic Con, ShockYa.com had the opportunity to sit down with Kat Graham, Mystic Falls’ resident witch, Bonnie Bennett, who finally succumbs to the overuse of her power at the end of season four having sacrificed herself to bring Jeremy (Steven R. McQueen) back from the dead. But this is Bonnie Bennett we’re talking about here; can she really be gone? Thanks to the existence of ghosts in the “Vampire Diaries” realm, Bonnie will continue to be part of the show, but only exist on the other side of the veil.

Check out what Graham revealed about the new season in the roundtable interview below. She discusses the challenge of jumping back in and shooting the first episode of the new season, getting bloody, the rules of Bonnie’s new ghost life, and loads more.