The captive killer whale Tilikum made headlines when he killed his trainer, trainer Dawn Brancheau. However, not only has Tilikum been a part of other trainer killings, but Tilikum himself could be seen as a victim himself. “Blackfish,” by Gabriela Cowperthwaite, is a documentary that will change the way you see orcas and their captivity in parks like Sea World. ShockYa was excited to speak with Cowperthwaite to learn more about the film. See what she had to say below the post. “Blackfish” is in theaters now; check out the trailer below the post.

I’m especially interested in this film since it’s not just about orcas, but about captive and trained orcas. What led you to this type of subject matter?

Gabriela Cowperthwaite: Yeah, I actually don’t come from animal activism. I took my kids to Sea World, and as I’ve explained to people, there are often times when I would see a sad primate or something and I would see the expression on the primate’s face and think, “This is a sad animal,” and that would disturb me. But I always thought that Sea World’s whales were happy. They look loved…this is overall, [I thought that] if I had to be a captive animal, I would choose to be a captive whale at Shamu Stadium. I remember thinking that and I’m just so shocked at the 180 I’ve done in the past two years.

In entering the story, I became interested in the subject matter through the death of the trainer [Brancheau]. I couldn’t believe that happened. It was a tragic event. And I also just thought that the trainers loved the whales and the whales loved the trainers…I couldn’t have imagined that a highly intelligent animal would have made this decision. I also thought that killer whales didn’t kill people. So, that began my investigation. I peeled back the onion from that point on, and I was shocked at what I learned.

What are some of the things you learned?

Gabriela Cowperthwaite: The first revelatory thing for me was to learn that Tilikum had killed two people before…I was hoping [the death] was an accidental occurrence and that it wasn’t in some way deliberate, but in reading the autopsy reports and hearing about the actual attack, which went on for three hours, and learning that he had killed before, was so tragic and shocking for me. The other revelatory thing I’ve learned was whale-on-whale aggression. That whales are continually vying for dominance in captivity and the subdominant animal can’t flee. That animal has to confront conflict all the time. They injure each other and have been known to kill each other in captivity. There’s no evidence that a wild killer whale has ever killed another wild killer whale in its own pod or out of its pod. This has only happened in captivity.

I’ve read some of the background about the film, which stated that humans don’t know as much as we think we know about killer whales. Why, then, do you think we’re drawn to capturing them and training them?

Gabriela Cowperthwaite: There are scientists that have described [this] to me. We are primates and because we’re primates, the way we learn is through touching. We feel like we can’t understand something if we don’t, at some point, come up close to it and touch it. So I think that’s essentially why. I think it was well-meaning, you know, 40 years ago when we began this mad scientist experiment. I think we were reaching across the species veil to touch this magnificent animal and to make a friend. The problem is that we fell in love with them and once we fell in love with them, everyone wanted to be up close and touch this animal. Now we have a $2 billion-a-year industry that lets you experience that. During those 40 years, we came to learn that we can never give that animal what it needs to thrive, let alone survive, and that it’s becoming increasingly dangerous for us to keep trying. 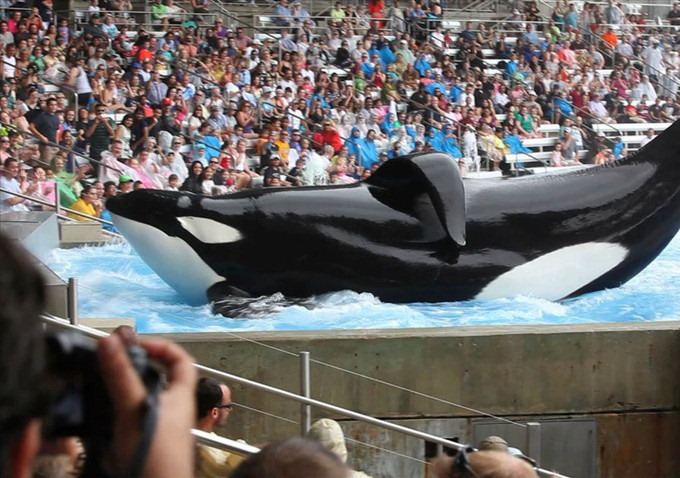