The details of the mission are a little sloppy, but the appeal of watching Bruce Willis, John Malkovich, and Helen Mirren rock some serious firepower is still there, making “RED 2” another satisfying Retired and Extremely Dangerous thrill.

Frank (Willis) is back to trying to live the quiet life again until Marvin (Malkovich) interrupts his Costco shopping session to warn him that Nightshade has come back to haunt them. Nightshade is a Cold War era nuclear weapon that went missing on their watch, but now it’s back, and both the US Government and MI6 think that Frank and Marvin know where it is. With Victoria (Mirren) trying to track them down on behalf of MI6 and a deadly assassin named Han (Byung-hun Lee) aiming to take them out for the US, Frank, Marvin, and Sarah (Mary-Louise Parker) have no choice, but to travel the globe and figure out where Nightshade is for themselves so they can put an end to all of this.

There are two primary components to the “RED 2” story and while neither works particularly well, there’s enough outrageous action to fill up the plot holes and make it an entertaining watch.

The driving force of the film is this whole Nightshade business and the concept is rather rocky right from the start. It’s easy to figure out that the guys are in trouble based on Marvin’s behavior alone, but before ensuring the details of the situation sink in, the plot jumps into a questionable funeral and then right into a scene during which Frank goes head-to-head with the US’s Jack Horton (Neal McDonough), someone who is seemingly an adversary of sorts, but technically does have good intentions. Because of the lack of groundwork prior to jumping into the rip-roaring pace and extreme action, the details throughout are hard to track, it’s tough to figure out how our heroes learn that certain curious characters are connected, and loyalties are often in question.

On the other hand, that second element of “RED 2” is as straightforward as they come. Sarah fell for Frank amidst gunfire and action, and now that they’re safe and sound, she’s longing for some combat again. Concerned for her safety, Frank not only will not oblige, but his effort to keep Sarah in the clear is obsessive to the point of being overbearing. The scenario of Sarah wanting to arm up, Frank saying no, and Marvin insisting that he’s being too strict is used to excess and does become tiresome, but every now and then another character will join in to deliver a solid one-liner or spice up the gag to keep the humor flowing well enough. Willis, Malkovich, Parker, and Mirren prove that they could take just about any joke, work it to death, and then still show there’s a little life left in it.

As for the “RED” newcomers, there are two standouts, Lee and, of course, Anthony Hopkins. Similar to the franchise’s core cast, Hopkin’s character gets a boost courtesy of his own personal star status. Dr. Edward Bailey is a curious person in an of himself and is one of few roles that are developed enough that it could have held up even with a less formidable actor in the role, but there’s also no doubt that Hopkins elevates Bailey to new levels of humor and lunacy. However, Bailey also experiences quite the character arc and that’s something that few could sell as well as Hopkins. In Lee’s case, he can’t use his famous face to his advantage, but does have an incredible combat skill set to show off. Lee does turn Han into a cartoonish villain every once in a while, but generally, he comes across as a true threat making him the primary source of suspense and peril. And then there’s Catherine Zeta-Jones’ Katja who doesn’t fall on either side of this line. Katja is an underdeveloped and totally ineffective character and, rather than have some fun with watching Zeta-Jones wield a weapon, her performance feels too much like a familiar actress playing dress up. Had Katja’s relationship with Frank and/or her involvement in the Nightshade predicament been more convincing, she might have enjoyed a success similar to that of her highly recognizable co-stars.

While there are many involved in bringing “RED 2” to the big screen and while they all deserve a degree of credit, this is still an actor’s film. Regardless of the exotic locations, vicious combat sequences, and, dare I say, even the presentation of it all, “RED 2” wouldn’t have achieved even a fraction of success had it not been for Willis, Malkovich, Parker, Mirren, Hopkins, and Lee in particular. There are very few instances where an actor’s star persona shines through a role and it works, but here, that’s what makes these movies something special. 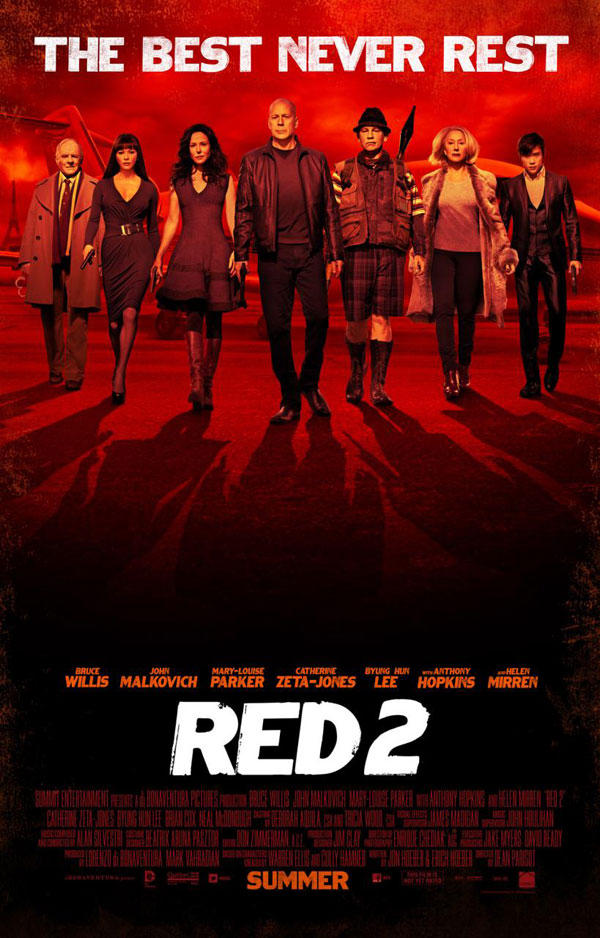