It’s a little too silly to sustain a significant character journey, but “The To Do List” is still a successful overload of nostalgic and incredibly raunchy humor.

Sure enough, per usual, Plaza plays it straight, but to a humorous effect, and her co-cast follows suit. No one’s striving for laughs, rather approaches their characters as real, thoughtful people, resulting in a tone somewhat in the vein of “Clueless.” However, again, like “Clueless,” “The To Do List” is not without heart. The experience is far more about getting a good laugh rather than seeing Brandy becoming a woman or even about her trying to track down the right guy, but the performances are strong enough that there are noticeable arcs and a handful of impressively tender moments.

The chemistry between the cast is key to the film’s success. Just about every single relationship has its perks, but the standout is the connection between Plaza, Shawkat, and Steele. They’re not popular, but they’re not losers, letting the trio exist in this middle realm where they can just be happy and enjoy who they are and, in turn, so does the audience. It’s also endlessly amusing watching Plaza and Rachel Bilson hurl zingers back and forth. Bilson plays Brandy’s sister, Amber, and while the two are related, they’re entirely different people. Brandy’s got the academic genes, but is inexperienced in every social and sexual context imaginable whereas Amber is a foul-mouthed, sassy, bride-to-be who enjoys gloating about her sexual prowess, resulting in a wonderfully relentless hostility.

Toss in Brandy and Amber’s parents (Clark Gregg and Connie Britton) and you’ve got the ultimate loving, but highly dysfunctional family. Mrs. Clark is more free spirited and understanding of Brandy’s sexual studies whereas her father prefers to keep her as buttoned up as possible. While each and every member of the Clark family occupies their own territory and has their own quirks, they all suffer from being brutally honest at all times and when you’ve got a group of people with such different preferences and values, it makes for some wonderfully testy family meals.

As for the men in Brandy’s life, one of the bigger winners is Bill Hader’s Willy. Brandy takes a summer job lifeguarding at the town pool where Willy’s the boss, but rather than keep his employees in line it’s Willy more so than anyone who enjoys giving Brandy a hefty dose of newbie hazing. However, even with Willy’s constant comic harassment, Hader still manages to stir up one of the film’s more charming relationships, as he successfully sells Willy as a father figure of sorts to Brandy. Porter also hits it big as the ultimate eye candy, but Johnny Simmons is equally as successful as Brandy’s longtime lab partner with an endearing crush, Cameron. Brandy’s goal of nailing Rusty is out there right from the start and while you want her to succeed, you also just want her to realize that not only can she check off that entire to do list with Cameron, but he’s also someone who actually cares about her. But, then again, the more misguided Brandy is, the more guys she winds up recruiting to experiment with and, therefore, the more wildly hilarious situations she finds herself in.

Plot points for the sake of laughs are generally not a smart move, but in the case of “The To Do List” it works because director Maggie Carrey and her cast commit and plow through the material full force. From the moment the film begins, Carrey establishes a beat, leaving you expecting a laugh on a regular basis. The dedication to that leaves less room for deep emotion and poignant character arcs, but the film is so satisfying as a string of laughs, the fact that nobody really comes out of this scenario as a better person doesn’t matter because the experience has been such an outrageous, awkwardly erotic romp. 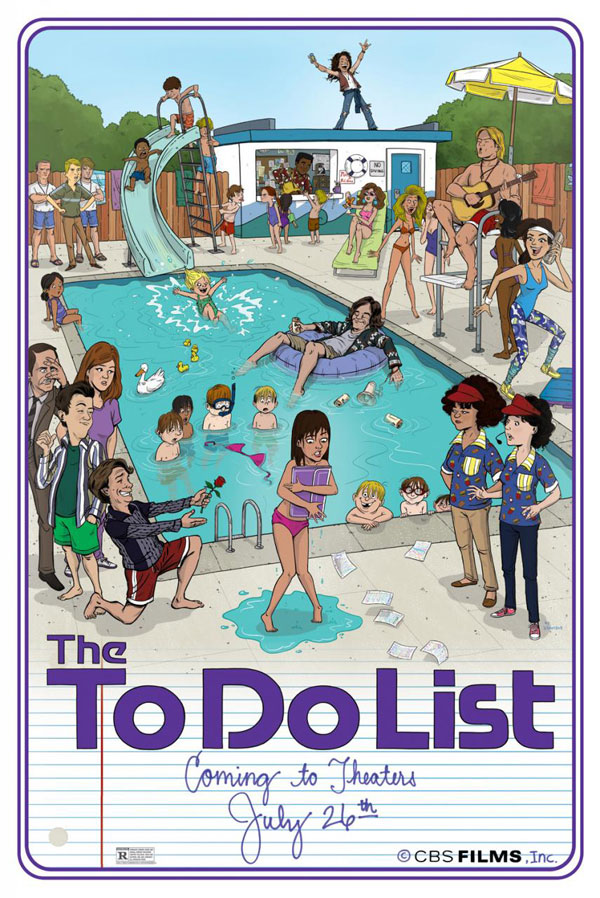