Bruce Springsteen has sold 120 million albums worldwide, and racked up 20 Grammys, but it’s his reputation as a consummate live showman that perhaps shines most brightly, and still has the ability to bring even sitting governors to tears. Taking inspiration from the Ridley Scott-produced “Life in a Day” (Scott also nabs a producing credit here), the crowd-sourced concert-and-reminiscence documentary “Springsteen & I” highlights with an unadorned effectiveness the deeply personal connection so many fans have with the man they call “The Boss.”

The concept behind “Springsteen & I” is simple; it doesn’t have any new, insightful interviews with Springsteen, or analysis from any of his many musical collaborators over the years. Rather, composed as it is almost entirely of fan-produced material, the film serves as a curated inquiry (Baillie Walsh takes a director’s credit) into fandom. It’s a movie about the people who love Springsteen, and connect to the honesty they hear in his music. Ergo, there’s lots of sentimentality, with a couple pinches of requisite weirdness (one woman recounts with pride using a picture of Springsteen with her toddler as a sort of flashcard for the word “daddy”).

It may sound a bit dodgy as a framework for a feature film offering, but it mostly works — owing to the fact that it becomes readily apparent how and why Springsteen inspires such devotion, with his hearty blue-collar anthems and affinity for the working class. From “Born to Run” and “Blood Brothers” to “Dancing in the Dark,” “Jungleland” and many more — anecdotes aplenty flow from these songs, and classic performance footage of accompaniment is a nice cross-section which showcases the emotional liftoff his concerts so often achieve.

There’s also some never-before-seen archival footage — which is a nice respite from the generally cruddy technical quality of much of the fan-recorded stuff, captured on cell phones or webcams seemingly liberated from a Balkan second-hand electronics store — and the movie’s theatrical bookings features unreleased big screen performance highlights from the London Hard Rock Calling Wrecking Ball tour, and a behind-the-scenes fan meet-and-greet with Springsteen. “Springsteen & I” is catnip to hardcore fans, but music aficionados of all stripes should find some reward herein.

NOTE: On the evening of July 30, “Springsteen & I” will be presented in nearly 500 movie theaters around the country through NCM Fathom Events’ exclusive digital broadcast network. Tickets are available at participating theater box offices and online at www.FathomEvents.com. For more information, also visit the movie’s website, www.SpringsteenAndI.com. 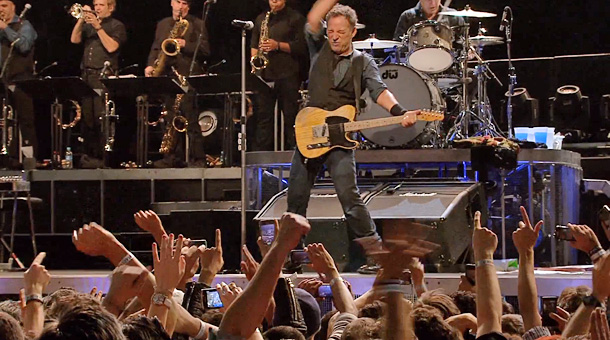