Title: The Time Being

A willfully muted chamber piece, “The Time Being,” co-written and directed by Nenad Cican-Sain, is a curious thing. Centering mostly around a struggling artist (Wes Bentley) and his mysterious new benefactor (Frank Langella), the film touches on themes of loneliness, family and social need, but doesn’t sketch out its characters in interesting or dynamic enough fashion to ever blossom into anything more than a meditative curio.

Daniel (Bentley) is a struggling painter and young father whose frustration with his own lack of breakthrough success has pushed relations with his wife (Ahna O’Reilly) toward a breaking point. His latest gallery show nets only a single sale, to reclusive millionaire Warner (Langella). Visiting him in hopes of additional commissions, Warner instead offers Daniel a series of strange and very specific assignments of videotaping things (no, no plastic bags are involved). Desperate for money, Daniel accepts. Ornery (“That’s a very American way to qualify a person’s value,” he says when asked what he did prior to retirement) and terminally ill, Warner brushes aside Daniel’s awkward attempts at negotiation by curtly saying, “If I intended to pay that much I would have.”

This continues for a while, and some of Warner’s secrets slowly come out; he eventually confesses having pulled a “Hungry Heart”-type walk-out, not wanting to feel beholden in life, as a provider. As he learns more, Daniel has to figure out what to do with this information, and what, if anything, it ultimately means for his career.

“The Time Being” resolutely lacks any sort of cathartic roundhouse kick, but it’s never really boring mainly because Cican-Sain is a disciplined director, and also oversees a beguiling technical package that hints at roiled inner landscapes the screenplay proper doesn’t much address. The film’s cinematography and austere production design are alluring, drawing viewers into a mystery without really ever tipping its hand tonally, one way or the other.

What “The Time Being” lacks is something to stand in starker contrast to its spartan aesthetic. As written, Daniel isn’t the most proactive or pronounced character, but Bentley also plays him in a blank-faced manner that makes him seem divorced from any rooting interest in his own life, almost as if he’s trying to out-sublimate Langella. This is, needless to say, not a winning strategy. By the time “The Time Being”‘s family secrets are fully revealed, the movie’s unusual hold has lessened considerably. Still, there are the roots of something different and striking here, even if its shoots aren’t fully developed.

NOTE: In addition to its theatrical dates in New York, Los Angeles, Phoenix, Portland and Boca Raton, “The Time Being” opens in Louisville on August 9. It is also currently available across VOD platforms. 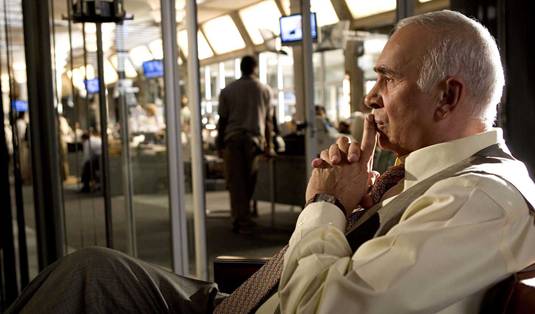 Cancel reply
Interview: Fernando Trueba and Aida Folch On The Artist and the Model
The Spectacular Now Movie Review
To Top