“The Spectacular Now” swaps storytelling truisms for the natural beat of life and thanks to outstanding performances from Miles Teller and Shailene Woodley, that results in an exceptionally raw and poignant experience.

Sutter Keely (Miles Teller) isn’t a star athlete or class president, but he’s loved by all for being the life of every party. With his equally adored girlfriend Cassidy (Brie Larson) by his side, Sutter is unstoppable. That is until Cassidy dumps him. After drowning his sorrows in alcohol, Sutter wakes up outside, in the middle of someone’s lawn with absolutely no recollection of where he left his car. It could have been all downhill from there, but fortunately for Sutter, there is a silver lining to this episode, and that silver lining is Aimee Finicky (Shailene Woodley).

We’ve seen popular guys abandon all high school social standards to date the quiet, nice girl, but what makes “The Spectacular Now” stand out is that this time, you believe it. Sutter isn’t embarking on some grand adventure that climaxes with an unforgettable senior prom, rather he’s simply living life for a stretch of time as anyone might. The outcome is a film with varying stakes, emotions, and pacing, and also one with a strong backbone of impeccable character development and performances, making it extremely genuine.

Having recently come off of “21 & Over,” it’s easy to see why one might think Teller would be a good fit for Sutter and while he is a natural when Sutter is in party mode, Teller also exhibits such an notable range that you’ll find yourself evaluating each situation from Sutter’s perspective. And that’s key to the success of his romantic woes. Aimee is wonderful in every respect; she’s smart, kind, a good listener, and more. But at the same time, you can still feel the lingering connection between Sutter and Cassidy, and she isn’t just a device to add conflict to the situation. You truly understand and even feel Sutter’s longing for her.

But even then, that makes his relationship with Aimee all the more powerful. This isn’t just a movie about finding love; it’s about becoming a better person. However, again, just like life, Sutter and Aimee’s relationship isn’t as simple as that. It’s clear that Aimee is good for Sutter, but Aimee’s needs must be met as well. It’s obvious that they can do that for each other, but there are so many other factors in play. Sutter has a serious drinking problem, Aimee is selfless to a fault, Sutter lacks direction and ambition, both have tension within their families, and more. There’s no quick fix to everything. Solving one issue affects potential remedying another and that creates a truly dynamic, interesting, and real conflict.

That success is also largely due to a stellar performance from Woodley. If her work in “The Descendants” didn’t convince you that she’s one of the best rising talents out there, “The Spectacular Now” absolutely will. She gives Aimee this sweet exterior, but also makes her much more than that. Every facet of Aimee’s personality has dimension. She’s kind and caring, but her eager-to-please attitude is occasionally self-destructive. She respects her parents, but stunts her own growth in the process. Pair that with the fact that Woodley offers the audience total access to Aimee and, as a viewer, you wind up truly caring for the character and naturally assessing everything about her and her decisions and, when it comes to Sutter, that opens the floodgates to an incredible amount of emotion.

On the supporting front, per usual, Larson is a standout. She only gets so much screen time, but you can almost always see Sutter carrying her around with him. Mary Elizabeth Winstead gets even less screen time as Sutter’s sister, but boasts one of the films most moving scenes while Dayo Okeniyi steps out of the “Hunger Games” shadow and proves he’s got some serious talent, taking his character’s quintessential big man on campus persona and peeling back the layers during an unforgettable moment with Teller. Then there’s Jennifer Jason Leigh who strikes the ideal balance between tough and loving mother. She deftly hits beats on both sides of that divide until, ultimately, everything we’ve experience with her comes to a head in yet another remarkable scene.

The uneven pacing could be a turnoff for some, but it’s key to the success of director James Ponsoldt’s remarkably realistic approach to the material. “The Spectacular Now” doesn’t spoon-feed you information and emotions; it expects you to experience them alongside Aimee and Sutter and gauge from that standpoint. Ponsoldt isn’t telling his audience a story. He’s letting you experience one. 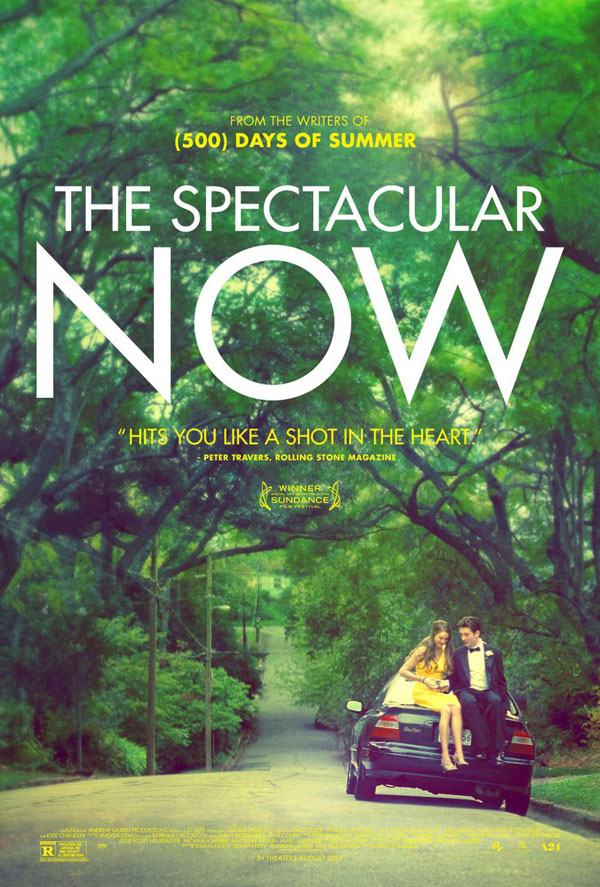 Cancel reply
The Time Being Movie Review
Box Office Predictions: The Box Office Could Get Smurfed
To Top