Frighting for the person fighting next to you and the morals you both strongly feel for is an important theme that effortlessly provides the perfect set-up for the non-stop action sequences in the new action crime comedy, ‘2 Guns.’ Director Baltasar Kormákur cleverlyly supported the movie’s theme by casting the perfectly paired Denzel Washington and Mark Wahlberg, who have a naturally comedic bond. Not only does the movie amusingly build on the relationship between the two actors, but also features impressive stunt sequences and production designs that provide an authentic meaning and purpose to the story.

‘2 Guns’ follows two operatives from competing bureaus, DEA agent Bobby Trench (Washington) and U.S. naval intelligence officer Marcus Stigman (Wahlberg), who have been reluctantly been working undercover together for the past year. While the two have been placed as undercover members of a narcotics syndicate from their respective bosses, neither is aware that the other is also an undercover agent. But they both have come to distrust each other, just as much as the criminals they have been tasked to track down.

Trench and Stigman both attempt to infiltrate a Mexican drug cartel and recover millions of dollars, but their mission quickly unravels. Both men are suddenly disavowed by their superiors, including Trench’s boss Jessup (Robert John Burke) and Stigman’s boss Quince (James Marsden). With everyone wanting the two either dead or in jail, Trench begins to think the only person he can trust is his contact in the DEA, Deb (Paula Patton), who he’s been having an affair with. But he soon comes to discover that not even she can save the two agents from their new-found enemies.

Kormákur, who previously directed Wahlberg in ‘Contraband,’ smartly cast the Academy Award-nominated actor and Washington together. The two actors effortlessly played the two at-times arrogant undercover agents who comically learn to trust each other in the film’s adrenaline-pumping action sequences. Washington nonchalantly plays his DEA agent as though he doesn’t truly care about the close relationships he inadvertently form with those around him, especially with Stigman and Deb, but would do whatever it takes to protect those he comes to appreciate. Whether Trench is lying about knowing where the missing money to stop the Mexican cartel from killing Deb or starting a fire on the Navy base to deter officers from arresting Stigman, Washington plays the character in stride, and doesn’t allow any situation deter him, no matter how dire.

Wahlberg, meanwhile, naturally portrayed Stigman in a more ostentatious and grandiose fashion, and effortlessly brought humor to even the most shocking and life-threatening scenes. From taunting Trench to grab their car keys from his pants while they’re trying to kidnap a Mexican drug cartel leader, to shamelessly flirting with the women they met in order to get whatever information they needed to stop the cartel, the actor infused the character with an authentic charm that naturally captures attention. The quick wit Wahlberg infused into his naval officer intriguingly balanced the strong moral code and charm Washington brought to his DEA agent.

Stunt coordinator Darrin Prescott cleverly emphasized the unfaltering trust and the playful banter between Trench and Stigman throughout the action crime comedy. From the creatively choreographed bank robbery sequence during which the two undercover agents still the money to stop the drug cartel, to the high adrenaline chase through the naval base as the two race to see if Quince is hiding the money, Prescott impressively highlighted Trench and Stigman’s ease at fighting their way out of trouble. The two characters weren’t afraid to take on whatever painful physical blow came at them during the fights Prescott staged.

‘2 Guns’ production designer, Beth Mickle, also impressively reflected the troubling situations Trench and Stigman regularly found themselves as they set out to clear their names and discover the real reasons why the Navy and DEA wanted the money. The pristine order of the locations where people are trying to hide their involvement in the missing money, from the office of Admiral Tuwey (Fred Ward) Stigman visits on the Naval base, to Jessup’s house, where Stigman and Trench go to question their superiors about their roles, reflect how renounced the two undercover agents have become from their jobs. The American offices and homes are in stark comparison to the run-down, muddled Mexican homes where Trench and Stigman try to track down the cartel members responsible for running the drugs and money the officers have been trying to track down. The lower-class homes reflect the demotion and loss of respect the two agents received from their bosses after the handling of the money went awry.

The adrenaline-pumping action sequences, effortless comedic comradeship between Washington and Wahlberg and reflective production in ‘2 Guns’ captivatingly balanced the high-intensity of the two agents’ need to clear their names and the authentic bond they began to form together. The natural humor Wahlberg brought to his naval officer intriguingly balanced the honor and charisma Washington infused into his DEA agent. The unfaltering trust and continuous teasing between Trench and Stigman was cleverly shown through Prescott’s highly intense fight sequences throughout the film. The agents’ continued struggle was creatively showcased throughout Mickle’s carefully planned sets, further reflecting that whenever placed in trouble, help can come from the most surprisng ally. 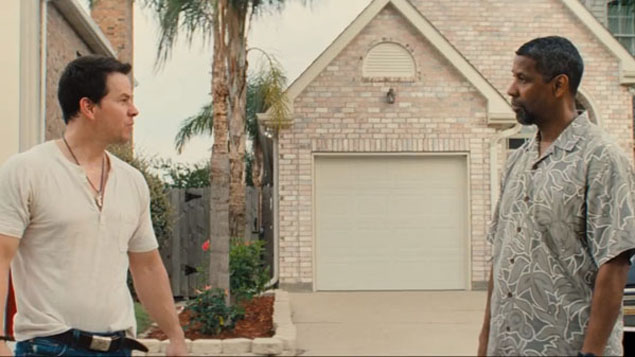