A satisfying, enormously likable genre cocktail, “Cockneys vs. Zombies” not only delivers upon its title promise, but does so with wit and fleet-of-foot aplomb. Director Matthias Hoene, working from a screenplay by James Moran and Lucas Roche, delivers an entertaining romp that successfully purées its many disparate antecedents, imparting flecks of cheeky homage while also standing steady, firm and fine on its own two feet.

The story centers around brothers Andy and Terry McGuire (Harry Treadaway and Rasmus Hardiker, respectively), who, along with sis Katy (Michelle Ryan), seize upon a bank robbery scheme in order to keep their salty, pensioner grandfather Ray (Alan Ford, quite funny) and his friends comfortable in the East End retirement home where they live. They hook up with some other bumbling, decidedly non-professional crooks (paste-on moustaches are passed out for disguise), but their best laid plans are upset by a band of marauding, living dead flesh-eaters, who get loose when some building contractors accidentally unseal a 350-year-old vault.

The many influences upon “Cockneys vs. Zombies” are obvious, both from a structural point-of-view and in terms of a lot of its banter. Still, while zombies have been much reimagined as of late, and inserted into everything from big-budget studio tentpoles to super-independent send-ups of John Hughes films, the combination of flavors (or should I say flavours?) here feels fresh — at least until the movie hits a bit of a wall in the third act. Hoene delivers stylish, peppy flashbacks, a la Guy Ritchie, that inform his characters in fun ways, and the film’s tone is overall one of good-natured farce, even though there are plenty of moments of amusing, splatter-heavy pop violence. The cast abets in this interpretation, throwing themselves into performances that ably channel their characters’ sputtering exasperation, dumbfoundedness and, sometimes, just plain dumbness. If there is a zombie apocalypse, there’d be far worse crews to be stuck with than that of “Cockneys vs. Zombies.”

NOTE: In addition to its theatrical engagements, “Cockneys vs. Zombies” is also available across VOD platforms. 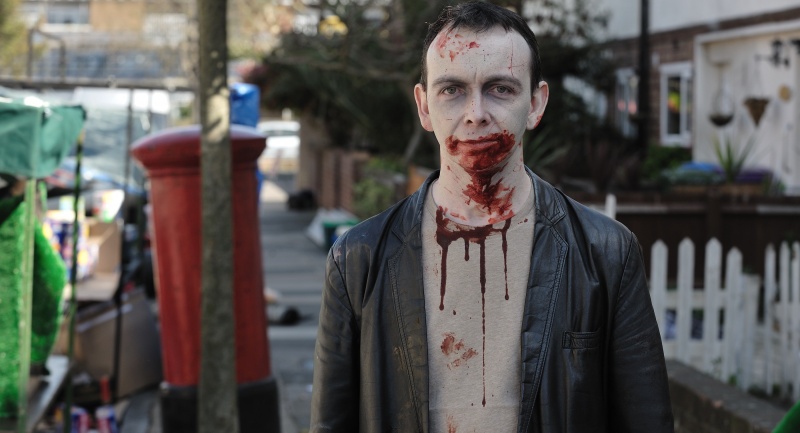