Interview: Writer Thunder Levin On The Phenomenon Known As ‘Sharknado’

Every once in awhile there is a movie so ridiculous in its premise that the public can’t ignore it. The more bizarre, outlandish movies that you can find tend to gain a form of cult status as time passes. For some it’s because of how awful the film is, others is due to the movie’s own unique and wonderful way it tackles a subject or genre, still managing to stand out amongst the crowd even if it doesn’t capture the full attention of the general audience. They capture the heart of the few but that’s enough to cement the film’s status in history in some way, shape or form.

While we’re not entirely sure if “Sharknado” will be the kind of B-grade movie that could one day achieve cult status, it at least has everyone’s attention. The SyFy original film has been talked about on social media, attracting people to it due to it’s ridiculous title that leads into an even crazier story where a shark-filled hurricane hits Los Angeles. It’s a kooky disaster movie that nobody asked for but we’ve all accepted one way or another with open arms. There’s always a man or woman behind their computer who, at some point in the beginning, brought this crazy idea to life. The writer responsible for “Sharknado” is Thunder Levin, a connoisseur of B-movie films whose big break is all thanks to this odd little film. We got the chance to speak to him about the popularity surrounding “Sharknado” and how it’s affected him.

Like many people I know, I’m socially active online, so when I first caught wind of “Sharknado” it was through there. The way it’s affected some of my friends is crazy. I had a friend of mine who wore a shark Hawaiian shirt in commemoration of the TV premiere.

Thunder Levin: It’s really been kind of amazing. Even before it aired, on July 4th a couple of friends from the East Coast called me up. They’re two completely different friends who didn’t know each other called me up and said they had been at parties where people had mentioned Sharknado to them, and that was even before it aired. There was some indication that the buzz was spreading but I don’t think anybody could have expected what actually happened that first night and what’s happened since.[laughs] There was a woman at Comic-Con with a Sharknado costume. It was mostly a hat. It was like a tornado that went up from her head and had sharks on it. And she came by to one of our poster signings and she spun around. It was fun.

I remember looking on Twitter the night of the premiere and it seemed as if everyone was talking about it.

Thunder Levin: We were doing a live tweet, me and the director and some of the cast were doing an organized live tweet during the broadcast, or at least we thought we were. It quickly got sort of overwhelmed. I would look down at the computer to type some comments, and by the time I would hit send and look back up, 200 more tweets have come in on Sharknado. That was kind of amazing.

When it comes to the creative process of just doing an Asylum film in general, do they throw you the idea or the title and you just go with it?

How is it like working with Asylum in general? It seems, even though it’s budget restricted to a degree, it seems like they let you do whatever you want when it comes to creating a story, along the lines of being as outrageous as you want because it’s this type of movie.

Thunder Levin: With “Sharknado” we got the chance to be outrageous. That was encouraged. That’s not always the way they go. On the whole, a lot of their films actually take themselves fairly seriously and they want them to be as good as they can be on the budget, but they also want you to reach as far as you can. To go as big as you can. You know a micro-budget film like two people sitting around and talking, and you can do that very well for 300 thousand dollars. The Asylum one would want you to take the same 300 thousand dollars and do a movie about the end of the world with things blowing up left and right. It is an approach if they want you to go big, but they get hands-on to a certain extent. They would say that they want the movie to be about this, you shouldn’t be winking at the audience and they’ll have involvement. It’s not to the extent as it would be in a big studio, and once you’re on set they don’t really bother you. I directed for them and I pretty much never heard anything. They never got involved once we were shooting. They wanted to make sure that the script is how they want it to be and then they’ll get out of your way and let you go off to make the movie.

All the films I’ve directed for them, I’ve also written. And then I’ve written two films for them now that I didn’t direct. The first one was “200 Miles Per Hour” and then now “Sharknado.” I was originally supposed to direct “Sharknado,” but “Sharknado and “Apocalypse Earth” were going to be shot at the same time. And I had to choose. Since I’ve already done sort of a campy monster disaster movie called “Mutant Vampire Zombies From The Hood,” which wasn’t Asylum, that was just something that we raised money and we did on our own, since I’ve already done that with that kind of feel to it, I wanted to try the serious science fiction thing. I was in the jungles of Costa Rica shooting “Apocalypse Earth” when “Sharknado” was being shot here in Los Angeles.

Out of the two movies, going to Costa Rica and staying in Los Angeles. I would probably lean a little bit more towards Costa Rica.

Thunder Levin: Yea, it was a great time. We had a lot to contend with because we were literally in the middle of the jungle so there were poisonous snakes, scorpions and there were spiders the sides of dinner plates. But on the other end, the Sharknado crew had to shoot a film about a hurricane hitting Los Angeles on a series of bright, sunny days, so they had their own challenges.

How has the general experience been working with a company that’s Asylum which has also catapulted you into this newfound fame that you probably weren’t expecting.

Thunder Levin: Asylum is great. They’re really a family, which I didn’t anticipate going in, but it’s really turning out that way. They really do embrace you. When I was editing “Apocalypse Earth” back in February, basically my mother was dying. She’s had Alzheimer’s for years but she was sort of in the final stages. The guys in Asylum told me to take a few days off. They bought me an airplane ticket and they sent me home to be with my mom. There really is a great family feeling to the company. And so that’s great. Obviously they’re limited as far as the budgets and the kinds of films they make. We’re not doing Shakespeare over there. But there’s a really good feeling being involved with them.

Obviously nobody could have expected the way it’s taken off. We had hopes it would be popular, because we had fun with it and we hoped that the audiences would and apparently they did. There was no way to anticipate that it was going to take off the way it did and become this pop culture phenomenon that it seems to become. It’s certainly helped my career along. I’m getting a lot of meetings now that I wouldn’t have gotten before. Some of my projects that were on the back burner may be.. they’re getting more attention. It’s been extraordinary. I’ve got a new agent now almost entirely because of “Sharknado.” If Sharknado had been the very first thing I’ve ever done, I’m not sure if I would have been able to take advantage of it in the way that I’m now hoping that I am. I’ve been at this for a long time and I’ve got a decent enough resume and I’ve got several projects that are just waiting, ready to go. Obviously as a struggling filmmaker you dream of something like this. As to whether I actually thought it was going to be a movie about a tornado full of sharks, obviously… it’s great and I’m having a wonderful time because it’s been so much fun.

So there’s already talks about a sequel, and I saw a few people promoting that at this year’s Comic-Con. It’s a fill-in-the-blank for the movie title.

Thunder Levin: There have been a lot of these mash-up titles that have been suggested. SyFy is doing a contest to name the sequel on Twitter. I think every conceivable animal and every conceivable weather phenomenon has been mashed up. It will be interesting to see what we end up going with. 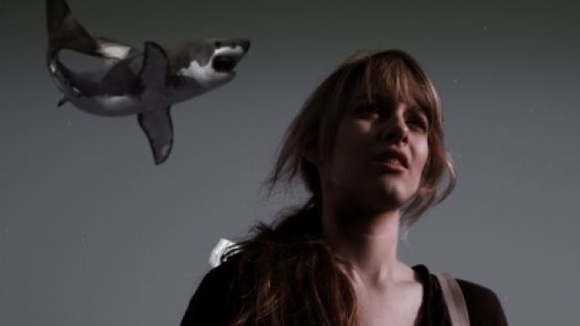