There’s nothing like family and it’s truer than ever in “We’re the Millers.” The plot isn’t particularly sound and jokes occasionally fall flat, but the appeal of watching this “family” come together is so enjoyable and satisfying, it makes the film an ideal way to round out the summer.

David Clark (Jason Sudeikis) is well out of college, but he’s still enjoying life as a small-time pot dealer. No wife, no kids, no obligations, just making money and doing as he pleases. David’s primarily content with his existence until he’s attacked and robbed by a gang of local teens. Having lost his stash and a significant amount of cash, David has no choice, but to report to his boss, Brad (Ed Helms), and come clean. Brad is unexpectedly amenable and offers to wipe David’s slate clean under one condition – he replaces Brad’s gunned down drug mule and smuggle a shipment of pot from Mexico in his place.

A guy in his 30s crossing the boarder alone is bound to get caught, so in an effort to better his chances, David puts together the ultimate disguise – a family. David recruits his geeky young neighbor Kenny (Will Poulter) to fill the role of his son, a runaway named Casey (Emma Roberts) to play his daughter, and another neighbor, Rose (Jennifer Aniston), who, of course, also happens to be a stripper, to step in as his wife and away they go on their Miller family vacation.

From the standpoint of someone who knows little to nothing about what it takes to smuggle a substantial amount of pot across the border, the core concept of “We’re the Millers” works well enough. It makes sense that a lone male driver would seem suspicious, but a family in an RV wouldn’t get a second glance. (That is until border patrol guards wind up catching this film.) There are a couple of plot points that feel instated for the sake of convenience, specifically the precise moment when the Millers get the thumbs up to cross over into the US, but when severe believability lapses threaten to break down the fantasy, well-timed and smart humor helps to nudge it along.

Every now and then we get a familiar gag spoiled by an overplayed trailer, but for the most part, the jokes feel fresh, are genuinely funny, and are further elevated by the top-notch cast. Sudeikis is the idyllic leading man for the film. His comedic timing is pristine, he’s got the ideal amount of chemistry with each and every co-star, and is able to take David from a drug dealer crazy enough to take on this job to a real person with honorable morals in an instant. And the same goes for the entire Miller clan.

A major part of the reason “We’re the Millers” is a standout commercial comedy is because it doesn’t rely on the humor; it takes the time to establish the characters in the middle of it first, which, in turn, winds up elevating that humor further. Similar to Sudeikis, Aniston, Poulter and Roberts all straddle the line between working their comedy skills, but also showing signs that their characters are real people with emotions that anyone can relate to. This whole adventure is absolutely ludicrous, but because it’s backed by some honest heart almost every step of the way, you want to buy into it because you’ve come to care about the “family” and genuinely enjoy spending time with them.

But, of course, part of the reason they’re so much fun to be around is because they have a tendency to get themselves in absolutely ridiculous situations and then find absolutely ridiculous solutions to get out of them. Aniston enjoys a brilliant running gag with a “baby,” the spider bite joke from the trailer hits a new level thanks to a smart editing decision, and loads more. The whole Rose is a stripper scenario is taken a bit too far, but even when items grow tiresome or are just not all that funny to begin with, the family dynamic always keeps a smile on your face.

However, there are also a few noticeably weak elements of the piece and they’re mainly the supporting characters. Nick Offerman, Kathryn Hahn, and Molly C. Quinn are all-around winners as the Fitzgerald family, but Helm’s Brad and Tomer Sisley’s Chacon could use some work and for two entirely different reasons. There’s way too much of Helms. Brad is such an extreme character that less would have been more. The more we see of Brad and his silly antics, the harder it is to believe that he’s capable of running a substantial drug operation. As for Sisley, he deserves Helms’ bloated screen time. As presented in the final film, Chacon is your typical vicious drug lord and nothing more. However, Sisley is capable of so much more than that, and you can tell. It’s noted that Chacon and Brad have some sort of rivalry going, so more information on that relationship could have made both characters more effective and perhaps even upped the suspense overall.

But ultimately, any plot holes, character weaknesses, or even believability issues are almost entirely assuaged by the simple fact that “We’re the Millers” is an absolute pleasure and thoroughly entertaining watch. David, Rose, Kenny, and Casey all have flaws, but they’re still highly amusing and likable people caught in an outrageous situation, and it’s a joy to experience that with them. If you’re looking for some quality family time, you can get just that from “We’re the Millers.” 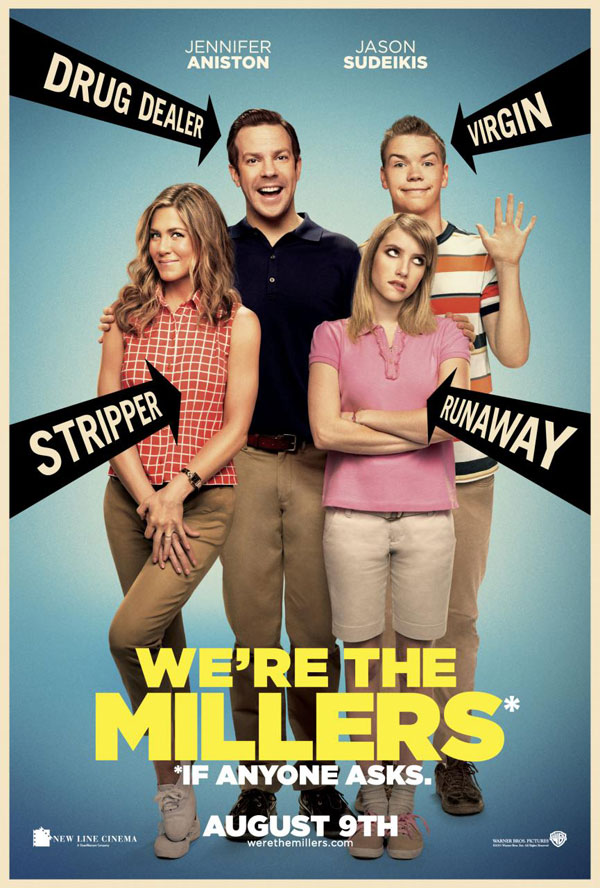