Rob Epstein and Jeffrey Friedman won an Academy Award for Best Documentary with ‘Common Threads: Stories from the Quilt’ in 1989. Epstein also won an Oscar for the doc ‘The Times of Harvey Milk’ and he made an amazing job in his transition to scripted narratives, with the biopic ‘Howl’ – the award-winning film about Allen Ginsberg’s controversial poem by the same name. The director-duo has ultimately made an extremely powerful biopic on the story of the lead actress of ‘Deep Throat.’

The drama swifts back and forth through time, with the delicacy of a rotoscope and the outstandingly credible make believe footage of a 70s super 8. The story is about blatant sex, but there is not one vulgar sequence, no intercourse is forthrightly slapped on the screen. Probably the sexual frames are the only ironic or tender moments of the movie, and as soon as violence starts to take over sexuality the camera gently swifts to the next scene.

The actors are outstanding. Amanda Seyfried undertook a total makeover: brown hair, brown contact lens, some additional freckles. She is as graceful as a princess in depicting the porn-diva with charm, naivety and feeling. Peter Sarsgaard is disquieting and multifaceted. He doesn’t deliver the stereotypical version of the violent husband: he gives many shades to Chuck Traynor, making us understand why Linda was initially deceived in thinking he was a gentleman. The utmost flabbergasting performance is by sex symbol Sharon Stone, who has warped all her seductive features to embody Dorothy Boreman, the harsh and domineering disciplinarian mother of Linda. Robert Patrick, who is more of the rock n’roll type, also had a complete changeover, to impersonate the quiet and resigned father of Linda, police officer John Boreman. British actress Juno Temple, who raised to worldwide stardom fairly quickly, is impeccable as Linda’s best friend Patsy. Former ‘Sex & the City’ “Mr Big” – Chris Noth – seems somehow out of place in the role of Anthony Romano, the mob porn producer, just as James Franco is a little plethoric in his impersonation of Hugh Hefner. But you can perceive they’re enjoying themselves; probably not as much as the former O.C. Idol, Adam Brody, who acts as Linda’s co-star of ‘Deep Throat,’ the actual porn actor who gets the “Lovelace treatment,” Harry Reems. 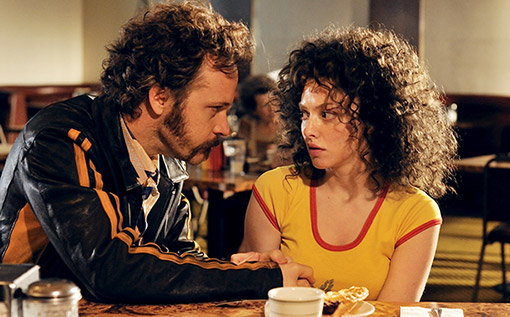