The box office results for the weekend of August 9th – August 11th has four newbies all vying for financial glory. Elysium earned just enough to claim victory while Planes and We’re the Millers battle it out for runner-up honors. Meanwhile, no wanted to play with Percy Jackson and his Sea of Monsters. Here are the studio estimates:

Considering the variety of genres the new releases covered, Elysium had a decent showing with its debut. While it should be able to eclipse the $100 million mark stateside, the international market will have to give it a hand to make bank off its $98 million production budget. This should have some shelf life at theaters as the summer season winds down this month.

We’re the Millers is in the best position out of all the newbies. The Jason Sudeikis and Jennifer Aniston R-rated road-trip comedy was put together for $37 million. With little genre competition on the horizon, this should play out fairly well over the next couple weeks for Warner Bros. When factoring its Wednesday opening, the current domestic total is just over $38 million.

Even though Planes is a 3D animation from Disney, the lackluster debut shouldn’t signal the dreaded flop alert. Crafted for just $50 million – cheap for an animation these days – somehow this will see the black ink on the balance sheet. And if not in theaters, the DVD/On-Demand run will surely make up the difference.

Twentieth Century Fox may have a solid case of sequelitis. Percy Jackson: Sea of Monsters is only half the (financial) man the first installment was back in 2010. Since opening on Wednesday, the teen fantasy adventure is at a disappointing $23.4 million. The first one went on to achieve a worldwide total of $226.4 million, with about 61% of that coming from overseas markets. So if there is a silver-lining here, the $90 million production budget may not be a dire obstacle with this being played on more international screens then it was in 2010.

Despicable Me 2 currently holds the longest streak in the top ten with 6 weeks. Now up to $338.2 million, it has taken over the #26 spot on the all-time domestic chart.

This Friday, another huge batch enters the summer close out sale as Jobs, Kick-Ass 2, The Butler, and Paranoia look to capitalize on the lazy days of the season. Reviews will be right here my fellow Shockers! 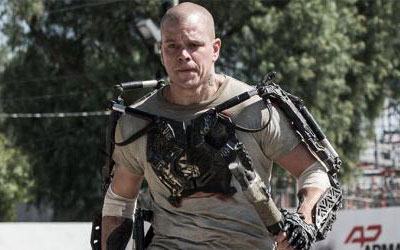