Jack Casey is a young and reckless stock trader who makes a big mistake costing him his job and losing his parents savings. He has to start from the ground up by getting a job as a bycicle delivery guy and makes several friends with fellow messengers all dreaming of living the rich life that Jack already had experienced. The messenger company takes on a new girl named Terry that catches the eye of a neighborhood thug named “Gypsy.” When he gets a little rough with Terry, Jack and his friends decide to fight for her honor and force Gypsy out of the neighborhood.

I was a young child when this film was released in 1986. I remembered that I was very bored and disinterested.  27 years later, my opinion hasn’t changed. This film played out as if the writer was borrowing from various popular films jamming them into one and writing some half-assed plot around it all. I saw elements of Rad, Trading Places, Flashdance, Staying Alive, The Warriors – just to name a few. There’s even a trick bike sequence where the spectators are over the top enthusiastic with some hideous 80’s track blaring over their hoots and hollering and it’s all for the fun of it, no prize money, just because.  Sure, it happens all the time.  There’s a ridiculously long chase scene involving Jack and Gypsy and dude is f-ing up his busted car chasing down another dude on a bike for disrespecting him because they threw some crap on his car and stopped him from beating the crap out of Terry.  Gypsy acts like he owns Terry after lending her $5.00 at a diner. I don’t have a concept for money in the 80s since I was just a kid, but was that like a couple grand back then?  Were there not that many women to go around, so he had to go all caveman on her?  The villain finally meets a violent and long deserved sendoff and the ending is cheesy and lame with another 80’s song blaring over it all. Why did Kevin Bacon’s character go for Terry? She’s like a little kid compared to him. He had some ballet dancer begging for his junk and he goes after a little girl. Ugh, I don’t get it.

80’s fanatics will watch for the nostalgia factor, but this really isn’t a good film at all. 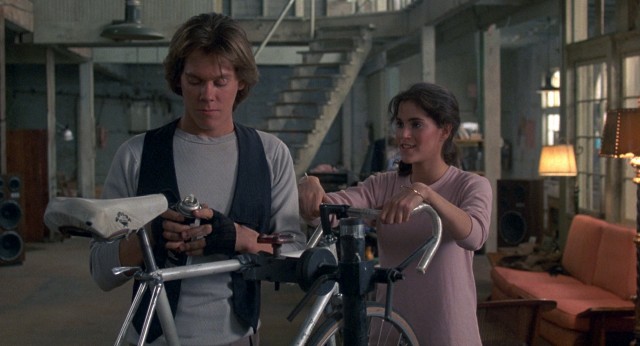