Dave, Mindy, and Chris (Aaron Taylor-Johnson, Chloë Grace Moretz, and Christopher Mintz-Plasse) are back, but now they’re older and have different agendas. Dave is determined to make due on the Kick-Ass hype by teaming up with a league of superheroes to really make a difference. Mindy, on the other hand, is hanging up her wig and weapons to appease Marcus (Morris Chestnut). Since Big Daddy’s passing, Marcus has been her legal guardian and is determined to keep her safe all costs, and Mindy feels obligated to respect that.

Meanwhile, Red Mist is long gone and Chris is busy channeling his rage over his father’s death into his new persona, the villainous Motherf%&*^r. With the help of Javier (John Leguizamo) and his family’s bank account, The Motherf%&*^r assembles the ultimate team of vicious thugs so he can take Kick-Ass out once and for all.

“Kick-Ass 2” further highlights the first film’s successful world and character building because it’s just such a pleasure and thrill to embark on another adventure with Kick-Ass and Hit Girl. However, that doesn’t mean the sequel is the first film all over again. In fact, part of what makes “Kick-Ass 2” a particularly viable second film is that it plays like the natural next chapter of their story.

Per usual, Moretz makes a big impression. As fun as it was to watch her run around slicing enemies to pieces and spitting out the most vulgar dialogue imaginable, she’s matured quite a bit and the change is vital to the character’s success here. She still has her signature unprecedented sass, but Mindy is also clearly hardened. When she verbally or physically abuses someone, it’s with thought and purpose and that winds up increasing the humor of her high school spats and increasing the intensity of her fight sequences.

Mintz-Plasse is absolutely overloaded with unforgettable scenes on both ends of the spectrum. Some of his best material involves his new brigade of henchmen, particularly Mother Russia (Olga Kurkulina), but there’s also a much darker side to Chris this time around and every now and then, it’s even a bit disturbing. Mintz-Plasse manages to nail every single scene, but the arc of the character suffers from the fact that there aren’t enough layers to justify Chris’ downright malicious behavior. If you really consider the motivation and rage it must take for a teenage boy to order his goons to commit particular atrocities, it’s a little too extreme to be believable.

As for our main man, Taylor-Johnson turns on the charm to make it work, but Kick-Ass winds up losing a significant amount of the spotlight to the far more colorful Hit Girl, Motherf%&*^r, and Justice Forever heroes. Donald Faison is wonderfully kooky as Dr. Gravity and Lindy Booth makes for a fun new hero and romantic interest for Kick-Ass as Night B*tch, but Jim Carrey is the undeniable standout. Not only is Colonel Stars and Stripes a blast to watch, but he’s also particularly well developed, exhibiting a number of creative and memorable nuances that make him an exceptionally unique character. Best of all, this is the first time in quite a while that Jim Carrey truly loses his star persona in a role.

“Kick-Ass 2” is highly entertaining from beginning to end with loads of memorable dialogue, impressive fight scenes and heart, but if you do stop to take a look around, there’s also no denying that certain pieces of the story could have used a few more layers. As enjoyable as it is to watch Kick-Ass and Night B*tch fight crime and then make out, that piece of the narrative would have been more meaningful had Wadlow not reduced Lyndsy Fonseca’s Katie Deauxma to an insignificant cameo. There’s also an interesting dynamic between Dave and his buddies, Marty and Todd (Clark Duke and Augustus Prew), but this scenario is severely weakened by the loss of Evan Peters. Prew doesn’t do anything wrong per se, but his performance is bland and forgettable.

“Kick-Ass 2’s” sole significant fault is that it spends so little time in middle ground. We get loads of playful banter and then emotional meltdowns. There’s a lighthearted “the gang’s all here feeling,” but then the violence becomes mean-spirited. There’s no harm in offering up a highly dynamic film, but you do have to fill in the gaps between the extremes and, on that front, “Kick-Ass 2” falls short. But, when the film does go big, we get original and immensely enjoyable sequences, making it more likely that you won’t think twice about the weaker elements in between and rather go home with a slew of vivid sequences to look forward to seeing again. 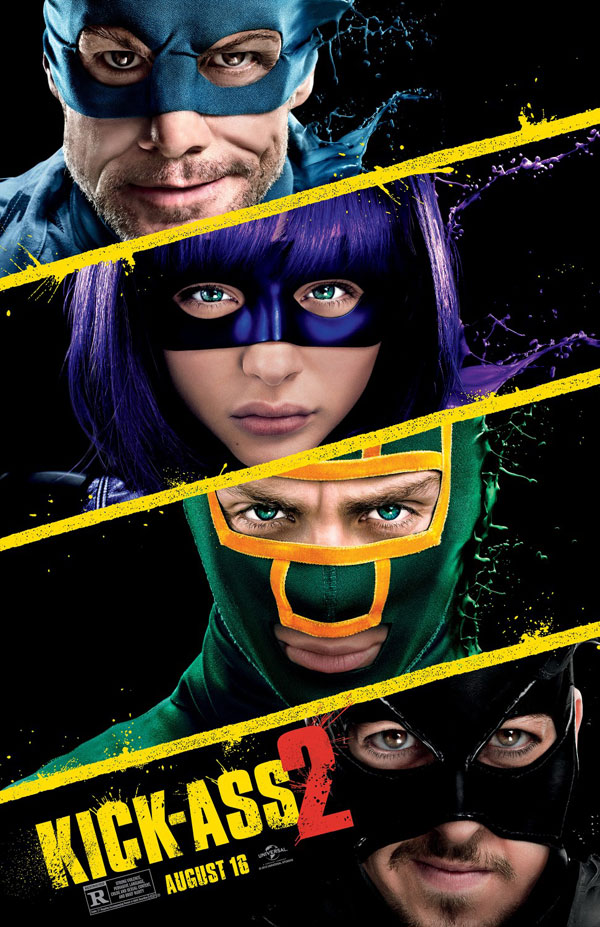