‘Miss Violence,’ in competition at the 70th Venice Film Festival, begins with a tumble. On her 11th birthday, Aggeliki jumps from the balcony of her home, smiling. While the police and social services try to figure out the reasons for what appears as suicide, her family determinedly maintains it was an accident. But the dark secret, the young girl brought to her grave, will slowly uncover a disquieting and perturbing truth.

The style of the film is initially allusive until there’s a radical change and a violent punch, why did you choose this contrast?

Because it’s the perfect reflection of reality: when you hear something, or have the feeling there’s something going on, and then you eventually find out it actually happened it’s a shock. And I wanted to give this same feeling in the film. It was important to me to hide everything and give the information slowly, step by step, but after a while I wanted the audience to actually see what was going on.

Narratively speaking you start with the effects and then dig into the cause, why did you choose this approach?

It’s European cinema, not American. I was adamant about this, even though I know it’s very risky to start with the shock effect and then keep the rhythm and attention of the audience. But I had six characters to introduce and a lot of questions that needed answering. My attempt was to give some hints and small explosions along the way that kept the viewer thinking.

How dear is the theme of femicide to you and how much research did you do on the topic before writing the script?

It took almost a year of research to layout the story. This topic is very important to me because we live in a men’s world. Not that women can’t take control, but women have to work and raise children, and manage the household. They have more work.

How did you prepare that actors, especially the younger girls who are subjected to sexual abuse?

First of all the actors are the best theatre actors in Greece. We don’t have a film school for actors as in other countries. We discussed a lot about the script together, I showed them my storyboard and shared my thoughts. We tailored the dialogues for each of them, so they would feel more natural in delivering their lines. The children knew the truth about the film from the beginning. So they had the feeling they were doing something important, since they believed that through this they could help other children. And that was inspirational for them. I made a long casting for these children that lasted approximately 6 to 8 months, also because their faces had to somehow match, since they interpret siblings. It was very important for me to make everything believable.

At one point the characters watch a documentary on animals, is this a clue to understand the ethical problem of violence?

It is. The mother never leaves the house, she always stays at home. She lives freedom through the animals, through nature, through the documentary. The animals on the other hand have other ways to react.

Do you think there might be the risk of exploiting the subject of violence to a certain extent?

Not in this case. I’m denouncing it, in a very respectful way, just like Pasolini did with his film ‘Salò.’ It’s not pushed too far, most of it is allusive except for one scene. There isn’t any kind of pornography. I didn’t want to make an entertainment movie, where audiences would walk out of the theatre and go out to eat after the screening, I wanted to get them thinking. Besides in ‘Miss Violence’ there’s a gradual build up of shock, because the enemy isn’t so clear: it’s within the household and it’s a personal responsibility to intervene, and not a collective revolt as in a dictatorship.

Why did you choose the song by Toto Cutugno ‘L’italiano vero’ for one of the emblematic abuse scenes?

The generation that heard this song, when it came out, was a generation that destroyed Greece. I like the song very much, it’s beautiful, there’s no blame connected to it. It simply marks historically the Greek twist of society’s crisis. It starts happily with the father dancing off tempo and then it’s interrupted when the girl feels sick. So I liked the contrast between hard and soft, beautiful and ugly.

What about the title ‘Miss Violence’…

It has a bivalent meaning: it stands for both “Lady of Violence” and “missing” violence. It’s a pun. 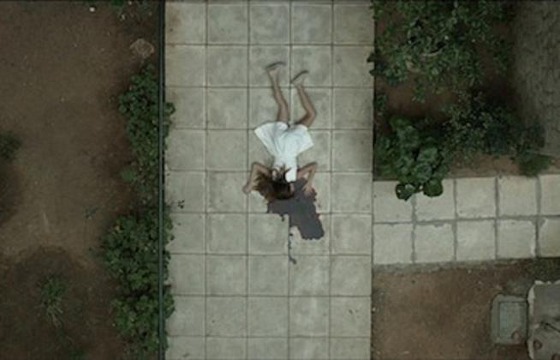