Shinji Aramaki’s upcoming 3D CG anime film marks Toei Animation’s highest production budget ever. ‘Space Pirate Captain Harlock’ animation film is based on the original comic series by legendary manga artist Leiji Matsumoto. The movie tells the story of Captain Harlock, the one man standing between the corrupt Gaia Coalition and their quest for complete intergalactic rule: Seeking revenge against those who wronged both mankind and himself, the mysterious space pirate roams the universe in his battle cruiser, the Arcadia, defiantly attacking and pillaging enemy ships. Gaia Fleet leader Ezra sends his younger brother, Logan, to infiltrate the Arcadia and assassinate Harlock. But Logan will soon discover that things are not always what they seem, and that legends are born for a reason. Harlock pushes his loyal crew forward in his death-defying mission to undo the Nodes of Time and reverse the Earth to an age when still inhabited by humans. It is the year 2977 and 500 billion displaced humans long to return to the planet they still refer to as home.

Manga artist Leiji Matsumoto speaks about the way Captain Harlock soared from his comic strips to the silver screen.

What has determined Captain Harlock’s success through so many years?

The titular character is unbelievably striking. His scar and eye patch, coupled with his skull-adorned clothes and cape are impossible to forget. His resolute nature of living out his resolve is also appealing. His charisma is unique and he few words he does say sink into your heart immediately.

What’s in a name: does the spaceship Arcadia refer to a vision of harmony with nature, as the Greek province of the same name which dates to antiquity?

It’s the place for Harlock’s fellows to congregate; society of its own and a utopia they strive to reach. I was introduced to the concept of Arcadia in the French film ‘Marianne de ma Jeunesse,’ which moved me when I was just 17 years old and which represents youthful admiration in my mind. Harlock features the resolve to set off on a journey and his meeting and separation of friends, are all things that I myself experienced as a youth. The name Harlock itself is a word I made up in elementary school, so I could say that this work is one that takes me back to my roots.

What is your general feeling on the adaptation of the comic into the movie?

This film is an incredibly high-quality work from the crew at Toei Movie Studio in Tokyo. It made me so happy because it has a realism quite different from the hand-drawn animation. At every turn, the visuals seem so real that you almost want to doubt if it’s real CGI and you want to believe that they somehow filmed an actual planet somewhere in the universe. I hope you will enjoy every last detail of the work. Shinji Aramaki, the director, did a terrific job. 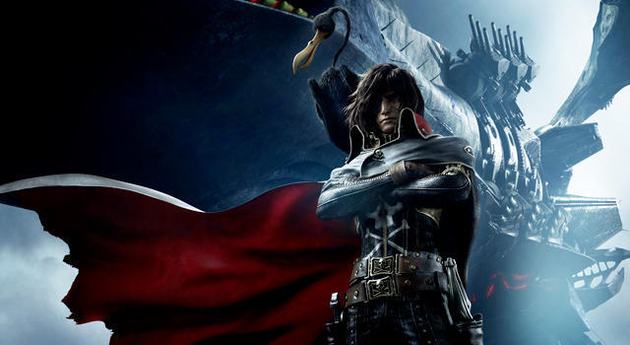