In “Afternoon Delight,” when a well-off, thirtysomething Los Angeles mother, Rachel (Kathryn Hahn), visits a strip club to try to spice up her marriage and ends up getting a private dance from McKenna (Juno Temple), an unlikely friendship is born, setting in motion waves of colorful and unexpected change. For ShockYa, Brent Simon recently had a chance to talk to writer-director Jill Soloway (“The United States of Tara”) about her feature film debut, the state of indie film, and notions of “the divided feminine.” The conversation is excerpted below:

ShockYa: I had the good fortune of seeing “Afternoon Delight” at a screening after which you did a Q&A, and among the literate and witty things you had to say was the fact that the movie was, partially, about the fact that men know not to bring home a stripper, but maybe some women do not have that realization.

Jill Soloway: Yeah, the damaged stripper cliché, the villainous sex worker, is a trope that’s everywhere. If you see a prostitute on television, it’s usually “CSI,” and it’s because someone is taking a DNA sample from her ear. (laughs) You can’t have a movie or TV show [where you] say sex workers are people too, but you can say semen was found in her whatever. (laughs) It’s odd that it would so incredibly revolutionary to allow the sex worker to exist in this movie and to get out alive and not rescued. “Pretty Woman” has that trope in it — that “Captain Save-a-Ho” thing. And if you read an article about sex workers in any magazine, like in Mademoiselle or Vogue, it always ends with, “And then I stopped being a stripper, and now I’m happy.” Here, I definitely knew that McKenna was still going to be a stripper — she’s going to get out of this movie alive, not having murdered any children, not have driven a kid on a play date and accidentally gotten into an accident, but she will not exist in this movie to hold society’s shame or darkness, and to get punished or to punish because she came into the house. I think Rachel actually ends up being the person who toward the end of the movie becomes her own antagonist. McKenna is a villain in that scene to some people when she’s dancing with the guys, but it’s also what we always knew was going to happen. Rachel, on the other hand, becomes a villain to the women in her community. Rachel holds the darkest parts of the movie, not McKenna. So it wasn’t super-intentional that it would end up that way, but what was intentional was that you would never be sure who to root for.

ShockYa: Surely, in the drafts that the script went through, you had to have had a lot of people expecting and probably even wanting it to be a more telegraphed, conventional tale of a husband’s infidelity.

JS: That was another thing that multiple people told me. When I was looking for producers it was taking a slightly more traditional, Hollywood route, and a few producers were saying, “Oh, the husband needs to have sex with her — this needs to ruin the marriage, raise the stakes. If this isn’t ruining the marriage then the story isn’t everything that it could be.” And I was like, “It doesn’t ruin the marriage! I specifically chose that the marriage that it did ruin was one that we kind of knew was on the rocks anyway.

ShockYa: Coming from television, which affords longer character arcs, was that feedback the biggest challenge in making the transition to feature film writing — having those conversations with producers nudging it in a more overly commercial direction?

JS: I have recently stopped seeing any distinction between film and television. I mean, when we were at Sundance and everybody had two-hour movies we were all wondering, “How did Jane Campion get a six-hour movie?” Oh, it’s “Top of the Lake” being shown all together. And now I look at something like “Orange is the New Black,” and that can be seen as a 10-hour movie. People are binge-watching television in a way that I think suggests that they want to have long relationships with their characters. And filmmakers who aren’t making big-budget, commercial, blockbuster, worldwide movies are struggling with this feeling of feeling bad that their movie doesn’t do well in theaters, when the truth is that 95 percent of people in this country prefer to consume (entertainment) content, even movies, through their television: Put the kids to sleep, watch a movie. Asking people to walk into a movie theater is sometimes asking them to spend $100 and hours of their time, and on your schedule. So I actually feel like there’s a bit of a revolution happening right now in terms of content, where I don’t really see a big difference between what movie and TV people want; I feel like audiences want content that is resonant and real and funny and deep. The people who are financing either movies or television are always going to have commercial concerns. I was reading this book in the John Cassavetes box set when I was shooting where he said that it’s your job as the artist to understand that the people who are spending money on your art are going to have commercial concerns. It’s part of your job to convince them to spend the money and stand up for the art; you’re the only person who’s going to do that. And that’s true with movies or TV. I don’t think the indie film world can be dead if there are other things that are indie film-branded and successful, like South by Southwest or Alamo Drafthouse or alternative music. I feel like people are always interested in something that feels like it came from the heart of an artist and speaks to something real.

ShockYa: A note I made in all caps while watching the movie was simply this: divided femininity And then you talked about that very fact in your Q&A, and how you had been to strip clubs in your research and feel this protective instinct kick in. Was there a lot of conscious research into that dichotomy on your part while writing?

JS: I think the best way to think about the divided feminine in our culture — and I hope this doesn’t come off as sounding wrong, so make it sound right when you print it — is something akin to I look back at the way the African-American community [viewed] black-on-black crime, as a way that personal violence was distracting people from institutional racism and violence. I feel like women get distracted from our own hatred — oh, she’s a slut, she’s a stripper, she’s a whore, I’m a good girl, I’m the mom, I’m the wife. And we have this obsession with who’s good and who’s bad. High school girls are always just completely ruining somebody else by calling them a hooker or a slut. Women really can’t be both — you can’t be sexual and be a good person, you can’t be a mom and sexy. Women are forced to choose. That’s the divided feminine in our culture. The divided feminine within people is: I’m a mom, I have the safety of monogamy, I stop having sex. The divided feminine in people is: I’m a stripper, therefore I would never be allowed to be a babysitter. It’s like, really? It’s so incongruous to people. …To me, it’s such a hidden notion in our society, that there’s this divide in femininity and the world, and the movie uses comedy I think to heal that. Does that sound really cheesy? 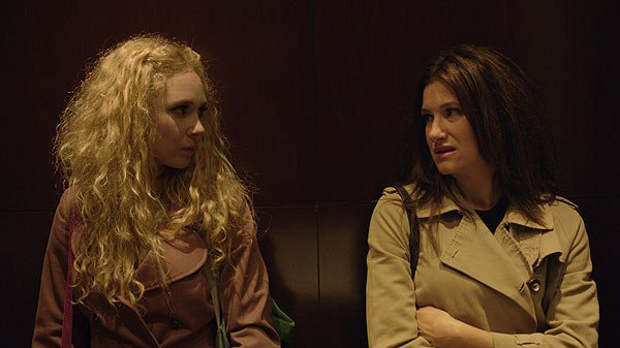