Think you’re too old to be afraid of the Boogeyman? Well, think again. This Halloween, The Boogeyman comes to Universal Studios Hollywood with “El Cucuy: The Boogeyman,” the latest in the destination’s lineup of award-winning “Halloween Horror Nights” authentic (and authentically scary) mazes opening Sept. 20.

The Boogeyman, called “El Cucuy” in Mexico, is a mythical ghost-monster with sharp claws and pointed teeth. According to the legend, “El Cucuy” is an evil spirit that lives in caves and terrorizes the pueblos at night, waiting under the beds and in the closets of disobedient children. The “El Cucuy” myth has been part of Hispanic folklore for years and is known widely throughout Latin America, Mexico and the United States.

The maze is narrated by fan-favorite Danny Trejo. Trejo said about the maze, ““I remember my mother telling me about ‘El Cucuy’ as a little kid and it freaked me out,” said Trejo, who also acts as the maze’s creative consultant. “I grew up with it and I told it to my kids, too. I can’t wait to check it out at ‘Halloween Horror Nights’.”

“Trejo’s distinctive gravelly, gruff and gripping voice deftly narrates the legend through the eyes of the monster and malevolently morphs into “El Cucuy.” Maze-goers will follow Trejo’s ominous voice as it guides them into disturbingly gruesome sights ravaged and pillaged by the shape-shifting trickery of “El Cucuy” including the scene of a child’s birthday party gone horribly awry.

Distressing maze chaos continues in sinister scenes which lure maze-goers through a family room, a child’s bedroom and closet where the merciless attack of “El Cucuy” is witnessed in pools of blood with lifeless bodies exposed to reveal gaping wounds; toys, stuffed animals and clothing are scattered about in the struggle.

Maze-goers soon find themselves entering “El Cucuy’s” evil cave; a cavernous macabre of horror where muffled cries for help signal impending torment ahead.4 exclusive renderings from the “El Cucuy: The Boogeyman” maze that I wanted to offer you. They are images of what some of the characters in the maze will look like, 2 are of the Boogeyman.”

We’ve got four exclusive images from “El Cucuy: The Boogeyman” featuring the characters in the maze. Some of which are of the boogeyman himself.

What do you think about the maze? Give your opinions in the comments section below! 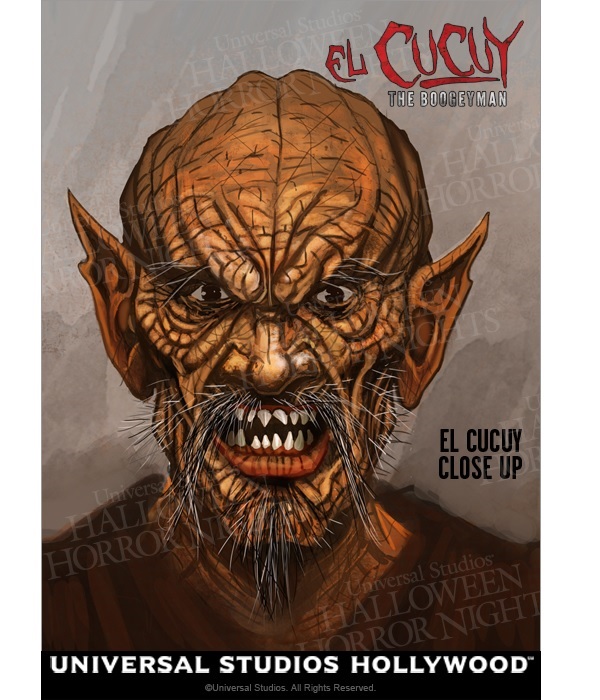