People exposed to continuous crime and poverty growing up tend to either be pulled into enduring and partaking in the same cycle of illegal activity as an adult, or force themselves to find a job that will help them rise above the corruption that held them down as a child. Striving to help stop the corruption that rules the streets in lower-class neighborhoods, police endlessly work to stop the leaders of criminal organizations maintain their rule, particularly over the young adults who believe they have no other way of survival. First time feature film writer-director Bryan Anthony Ramirez, whose father worked as a homicide detective while he was a child, strived to showcase that he was able to rise above the crime and violence in his neighborhood, with his new independent crime action drama, ‘Mission Park.’

‘Mission Park’ follows a group of childhood friends that grow apart over time, ending up on dramatically opposite sides of the law. Jason and Derek (Walter Perez and Joseph Julian Soria) drop out of high school, and get steered into a life of crime, while Bobby Ramirez and his adopted brother Julian (Jeremy Ray Valdez and Will Rothhaar) disappear from town after going off to college. Unbeknownst to anyone other than their father (Jesse Borrego), they both graduate from the police academy and eventually become federal agents. Years later, agents Montelongo and Ortiz (Vivica A. Fox and Douglas Spain) enlist their help, setting them up with a San Antonio police captain (Sean Patrick Flanery). The two brothers go undercover and take down a criminal organization their former friends have a large hand in, including an association with a drug dealer (Will Estes).

Ramirez generously took the time recently to talk about filming ‘Mission Park’ over the phone. Among other things, the writer-director discussed how he was inspired to tell the story in the action crime drama, because he wanted to explore a topic that impacted him growing up, as he saw his father arrest former childhood friends; as he learned to become a collaborator on the set, and allow the actors to offer suggestions on their characters’ lines and motivations; and how he teamed with executive producer Armando Montelongo, who distributed the independent movie theatrically through a partnership between his new production company, Armando Montelongo Productions, and the AMC Independent platform.

ShockYa (SY): You both wrote and directed the new action crime drama, ‘Mission Park.’ Where did you come up with the inspiration for the story, and do you feel penning the script helped you in your directorial duties?

Bryan Anthony Ramirez (BAR): I always wanted to be a writer-director, as I grew up loving movies. When I made my first feature film, I wanted it to be a topic that hit home for me, and really impacted me as a child growing up. I grew up in a bad area, and I saw a lot of people make the wrong choices. Luckily, I made the correct ones. So I made ‘Mission Park’ in a way that was going to be cool enough to have my name as a writer-director, and also have meaning for people, as well.

SY: The crime drama is about a group of childhood friends that grow apart over time, ending up on dramatically opposite sides of the law. As the son of a police officer, you saw your father having to arrest former childhood friends, and used those experiences as the theme for the film. Why was it important for you to reflect on that experience and incorporate it into a movie?

BAR: There’s a lot of violence out there. As a Mexican-American growing up, and having a father who worked as a homicide detective, I got to see another path and a better life. I wanted to share all the positives I was exposed to, to an audience who may not otherwise would have had that outreach.

SY: Like you mentioned earlier, you made your feature film directorial debut with ‘Mission Park.’ Was it always your intention to helm the movie as you were writing the script? Did penning the script help you in your helming duties on the set?

SY: Are there any lessons you learned while you were writing and directing ‘Mission Park’ that you’ll bring to your future films?

BAR: I’m a big collaborator now. When you’re on set, an actor can have a different line in his head, or a different way of saying a certain line that I had written. Now I’m open to hearing the different opinions he has, and seeing which options we have as a whole while making a movie, to make it better.

SY: Speaking of the actors, the film features a diverse cast, including Jeremy Ray Valdez, Sean Patrick Flanery, Will Estes and Vivica A. Fox. What was the casting process for the main actors?

BAR: Well, I wanted strong actors who haven’t been in the limelight yet, or haven’t been recently. I wanted to make a movie that could bring strong actors and strong character actors into a world that they may not know. Like with Jeremy Ray Valdez’s character, he just mesmerizes everybody.

SY: Were you able to have any rehearsal periods with the actors before you began shooting?

BAR: We were able to rehearse, but only for a couple of days. There wasn’t that much rehearsal, as the shoot was a quick process.

SY: ‘Mission Park’ was shot on a low budget. Did filming the movie independently pose any challenges or difficulties while you were shooting?

BAR: No, I have done a lot of commercials and music videos, so I was pretty adapted to having a lower budget. But having millions of dollars at your hands is different than having $100,000. But I was able to pull off my angles, as I had cranes and dollies, and all the tools that I would need.

Like I said, the actors were amazing. I also had an amazing team that helped me bring the vision I had in my head to reality.

SY: The film is set and was shot entirely in San Antonio. What was the experience of shooting the film in Texas like overall?

BAR: It was awesome. I grew up here, and a lot of the influences I had were here in San Antonio. So I was then able to take those influences that I had written about in the script, and bring them to life, in a way that many people haven’t before.

SY: ‘Mission Park’ is the first project from Armando Montelongo Productions, a San Antonio-based company founded by Armando Montelongo, a former star of A&E’s ‘Flip This House.’ The company was created to promote the production of independent films in South Texas. How did the collaboration with Armando come about, and what was it like working with him on the set?

BAR: I have worked with Armando before, years before our movie was made. We worked together on infomercials that have been airing and have been making a lot of money. When I wanted to make ‘Mission Park’ into a movie, he was open to hearing about what I had to offer.

He knew our infomercial had been one of the more successful ones. We had built a trust that helped us move forward with the movie.

SY: Armando Montelongo Productions has released ‘Mission Park’ in select theaters in Los Angeles, New York, Chicago and San Antonio, and it’s now playing part of the AMC Independent platform. What was the process of having AMC pick up the film’s theatrical distribution rights?

BAR: Our co-producer, David J. Phillips, had previously done a movie with them. While we were making our VOD and DVD offers with Lionsgate, we still wanted to go theatrical. We knew we had an awesome product on our hands.

So when David went to AMC with our movie, they saw it on Blu-ray. They said yes, they would love to partner with us on this. I’m really anxious and excited to see what happens during the movie’s theatrical run.

SY: Speaking of the VOD release, many independent films are currently being released On Demand. Are you a fan of the platform, and do you think VOD is the future of releasing independent films?

BAR: I do watch a lot of movies on VOD and On Demand, as well as on DVD and Blu-ray. But I love being at a theater, and buying popcorn. I love watching movies on the big screen, and being consumed by it, and being taken to a world I might not know. I hope that theaters are around forever.

BAR: I was very happy. I have attended most of them. It was almost magical, because you work so hard and achieve a dream. When you make a movie, your dream becomes a reality. You’re like, “Okay, I’ve got a movie now, what’s next?” After a festival picks it up, you’re like, “Wow, I’m in a festival, I’m happy.”

When you find out that you’ve actually won an award at the festivals, it’s a whole other level. You’re on a high because you’re like, “People really like my work, and I have a career in this.” I’m making movies that people appreciate, and that can further influence other people.

SY: Speaking of audiences’ reactions, what type of response have you received from viewers who have seen the film?

BAR: Everyone I’ve shown it to has absolutely loved it, and have shown so much appreciation. Everyone has so much overall happiness on what we’ve created. They’ve really loved it so far.

SY: Are there any particular filmmakers who have influenced your career and decision to become a writer-director, and whose work you appreciate?

BAR: Yes, I love Ridley Scott, Michael Mann and Martin Scorsese. Every film they’ve ever made has been mind-blowing to me.

SY: Besides ‘Mission Park,’ do you have any projects lined up that you can discuss?

BAR: I do. I have a psychological thriller called ‘For Jane’ that I wrote and I’m also directing. It’s in the early stages of development right now. 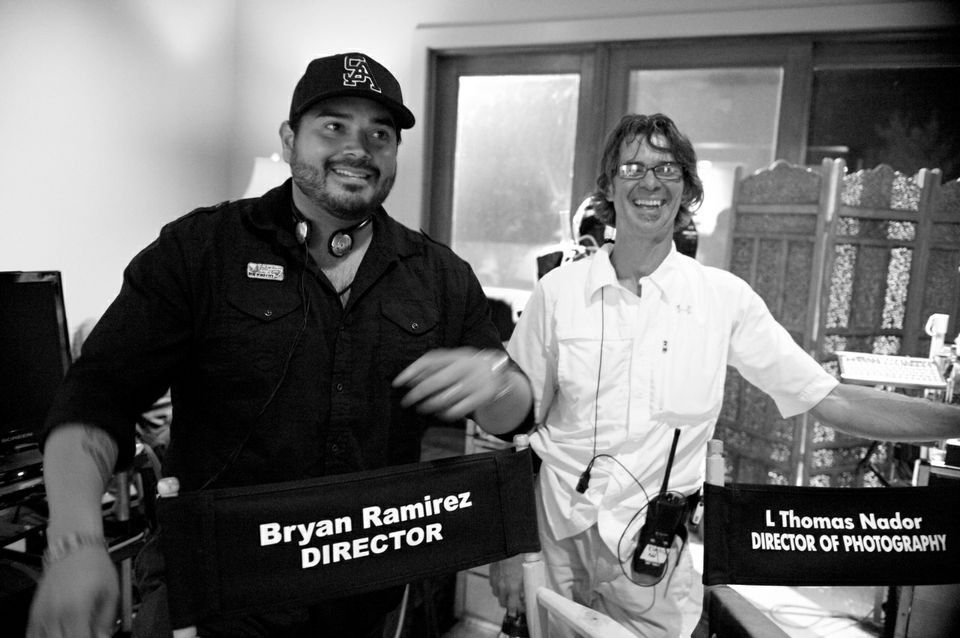