Nowadays, it is almost second nature to drown out vocals with a flood of instrumental sounds. As if auto-tune wasn’t helpful enough, these artists rely all too often on beats to fill the emotional void in their vocals. According to radio charts, this tactic can be deemed as successful, but when a talent dares to perform a track live, falling flat on stage commonly occurs (cough, cough Miley Cyrus). So, let’s introduce you, Shockya readers, to the New York based duo, MS MR, a group who fearlessly expresses a “pop” sound that rests heavily on raw vocals.

Comprised of Lizzy Plapinger, the “MS” (vocalist), and Max Hershenow, the “MR” (producer), MS MR, who are currently signed to IAMSOUND and Columbia Records, released their debut EP, “Candy Bar Creep Show”, last year via Tumblr. The EP’s four tracks, which include “Hurricane”, “Bones”, “Ash Tree Lane” and “Dark Doo Wop”, plus an additional eight songs compile the tracklisting for the outfit’s first studio album, “Secondhand Rapture”, which dropped May 10th via Columbia Records. Since then, the duo performed the album’s single “Hurricane” back in May on the “Late Show With David Letterman”. HBO’s smash, “Game Of Thrones”, featured the tune, “Bones”, on the show’s trailer for season three. Yes, that hauntingly empowering tune was that of MS MR.

As if fronting an album with unrefined vocals wasn’t daring enough, the duo continued the “firsts of many in the pop world” by instrumentally stylizing each song without comprising a cohesive flare on “Secondhand Rapture”. Basically, MS MR found a way to not fall prey to the curse of a tracklist of the “same type” of song. While “Hurricane” is the “catchiest” off the album, “Bones”, “Think Of You”,”Dark Doo Wop” and “BTSK” emotionally expose you to the lyrical message and the melodic mood of the tracks. Plapinger gingerly exudes alluring vocals that are made more mysterious with somber, yet beautiful tempos. MS MR knows what works for them and this knowledge gives them more “play” room to experiment with their already established sound.

It’s finally time for indie pop music to comeback into the limelight and MS MR is the ideal duo to dim the light on the self-deemed pop stars of the 21st Century.

For the latest information on MS MR, head on over to the group’s Facebook page and official site. 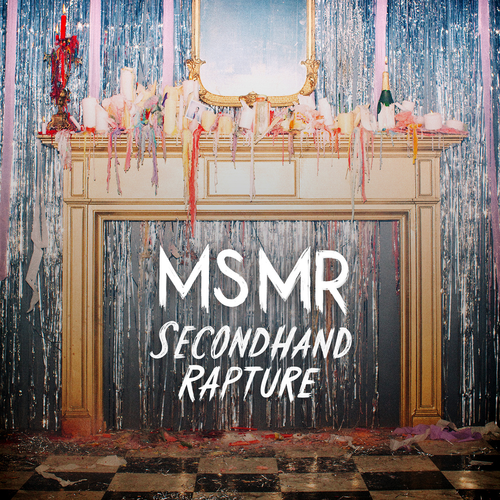