The talented team of filmmakers manage to elevate the uneven narrative, but as a dedicated fan of the original, “Insidious: Chapter 2” needed to be refined and unnervingly calculating. Instead, it’s just entertaining.

The sequel picks up right where the first film left off. Dalton Lambert (Ty Simpkins) is back from The Further, but Elise (Lin Shaye) is long gone. During the police investigation, Josh and Renai take the boys to his mother Lorraine’s (Barbara Hershey) home, but almost immediately after moving in, Renai and Lorraine come to realize that they’re still being haunted.

While Renai does her best to convince Josh that their family is at risk, Lorraine takes matters into her own hands, calls up Tucker and Specs (Angus Sampson and Leigh Whannell) and starts to investigate. With the help of Elise’s old colleague Carl (Steve Coulter), they try to put the pieces together so they can close the Lambert family’s connection to the spirit world once and for all.

When “Insidious” cracked your top ten of 2011 and “The Conjuring” is on its way to doing the same in 2013, “Insidious: Chapter 2” just has a lot to live up to and, sadly, it doesn’t. The film does have some remarkable qualities and ideas, but overall, it feels rushed, and it’s no wonder; “Insidious: Chapter 2” went into production in January of 2012 and wrapped just before Wan began filming “The Conjuring” in February of that same year. The movies are obviously deliberately shot using two different styles, but “The Conjuring” is also so clearly more refined, both in terms of its visuals and script.

However, that’s not to say that “Insidious” didn’t deserve this sequel. Writer Leigh Whannell had a prime trajectory to expand the original narrative but rather than have all his great ideas come together in one cohesive script, “Chapter 2” is more like a rollercoaster of solid ideas and less effective ones. This is a tough one to delve into without treading into spoiler territory, but, for example, the idea of the police getting involved in this surreal nightmare adds a curious new layer to the Lambert’s situation. However, rather than weave that into the narrative, it’s entirely forgotten after one revelation – and one that doesn’t really carry all that much weight at that.

Byrne also gets the short end of the stick this time around. Whereas Renai was a unique and highly effective driving force in the first film, here she’s totally ineffectual. Rather than push the story forward as she did in the past, here, Renai is reduced to a means to a scare. Wilson, on the other hand, gets some great material to play with and he seizes that opportunity. Some of the details of his situation aren’t half as fleshed out as they should be, but Josh requires a significant range this time around and, for the most part, Wilson sells it well.

Hershey also gets much more face time in “Chapter 2” and a storyline that’s strong enough to support it. Simply put, it’s fun watching her run about with Tucker, Specs, and Carl. That component of the film has an engaging mystery, something that Josh and Renai’s portion lacks. Their half of the film also comes with a hefty dose of humor, primarily courtesy of Tucker and Specs. Some of the jokes are heavy handed, but a number of them do land and the atmosphere benefits from the levity.

“Insidious: Chapter 2” also makes a remarkable use of flashbacks. This portion of the film could have done without the odd voice transplant that makes it so young Elise (Lindsay Seim) is speaking with old Elise’s voice, but the time shift is still highly engaging because it isn’t merely used as a device. There’s a great deal of thought behind the technique and while it has its sillier moments, namely one line of dialogue that’s unintentionally laughable towards the end, it enables the world of “Insidious” to grow in the best possible way.

But the big problem is, no matter how successful portions of the film are, they always fall victim to the fact that as a whole, it doesn’t work as well. The two storylines aren’t woven together as well as they should be so often you’re enjoying a sequence in one section and when it comes time to switch to the next, it deflates your enthusiasm and also the pace. There are also some great ideas that never reach their potential either because they’re underdeveloped or because small pieces of them just don’t make sense. This issue is particularly devastating towards the tail end of the film when it comes time to reveal the reason behind a string of extreme aggression.

These missteps aside, “Insidious: Chapter 2” is still an entertaining watch from beginning to end. Whereas the majority of jump scares feel cheap, Wan’s got an exceptional handle on the technique. Pair that with the return of composer Joseph Bishara’s incredibly upsetting score, and you’ll be on edge, waiting for the next moment that’ll make your heart skip a beat all the way through. 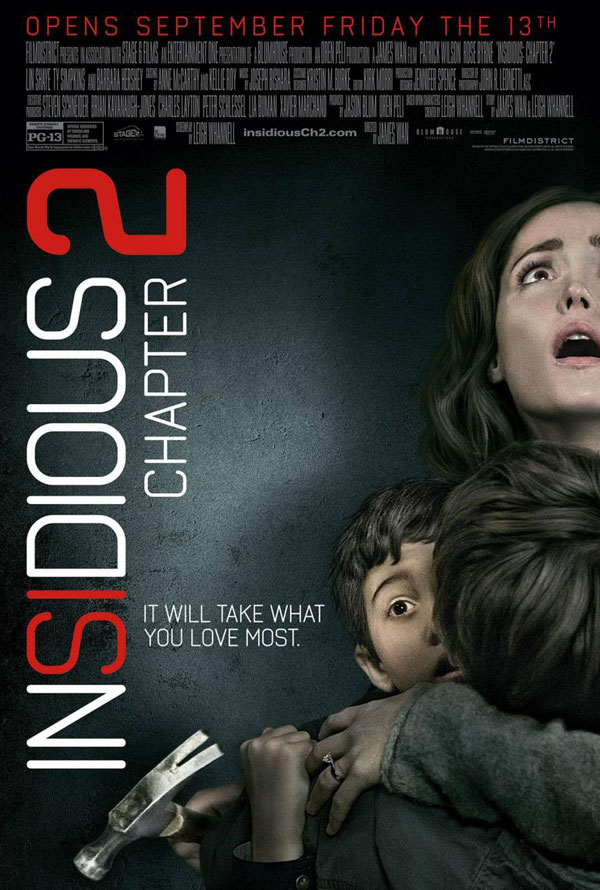