When Robert De Niro stars in a movie, it’s not hard to figure out what kind of character he’s playing. De Niro has spent decades cultivating his reputation as a tough guy on screen, and, despite some diversity mixed in, he has overwhelmingly shown a predilection for starring in gangster movies. In fact, he has mocked his mobster persona before, in the entertaining 1999 film Analyze This, opposite Billy Crystal, and its sequel, Analyze That. Forty years after his big gangster breakthrough in Mean Streets, De Niro is back in a different kind of look at made life, where those that snitch invariably find themselves looking over their shoulders for the rest of their lives, even while living in the Witness Protection Program in France.

The Family depicts a comic unit of parents and siblings, all equally prone to rage when wronged by unknowing parties. Husband Giovanni (Robert De Niro) doesn’t take kindly to being told that there is nothing he can do to get rid of the brown water in his pipes, and barely hesitates to brutalize a plumber with a baseball bat. Wife Maggie (Michelle Pfeiffer) is prone to blowing up French supermarkets when the owners ridicule her for asking if they peanut butter. Daughter Belle (Dianna Agron) is more than capable of taking care of herself, making excellent use of a tennis racket when she feels that she is being talked down to by a boy from school. Son Warren (John D’Leo) figures out a perfect system to game the school that puts him on top with connections to the all important people and has him beating up the bullies. You can take this family out of the mob, but you can’t take the mob out of them.

This film can be termed a gangster comedy because it contains inherently humorous exaggerations of typical gangster tropes while still setting its story within the framework of prison-bound Giovanni’s boss combing the planet for traces of his traitorous former lieutenant. Vincent Pastore, who played Big Pussy on The Sopranos, is even around in an extremely minor role to evoke a certain sentiment, as if the presence of De Niro wasn’t enough. The parody proves all too easy, however, and it does not feel like this film is trying very hard, particularly its lead actor, who coasts unenthusiastically through his every scene, relying on the history of his performances to sustain him. Pfeiffer, on the other hand, clearly has fun with her role and enjoys the opportunity to play a fish out of water unwilling to be pigeonholed. Young actors Agron, of Glee fame, and up-and-comer D’Leo, adapt well to the opportunity to learn from their established elders and make the most of broadly-written characters.

It is evident from the start of The Family, which begins with the murder of a random family by the ruthless assassin searching for Giovanni and then introduces the real family as they move into their latest accommodations, that this movie wants to be both a straight comedy and a competent action film. That difficult task is not achieved, as the pacing of the film doesn’t allow for smooth transitions between the over-the-top nature of the family’s comic reactions to meeting their new neighbors and the overdone drama of the mob being hot in pursuit with murderous intentions in mind. There is a way to take a genre and create a fully effective version of it that works as both parody and homage. This is simply an example of a talented French director, Luc Besson, working with a reputable American actor and aiming for a perfectly mediocre product. 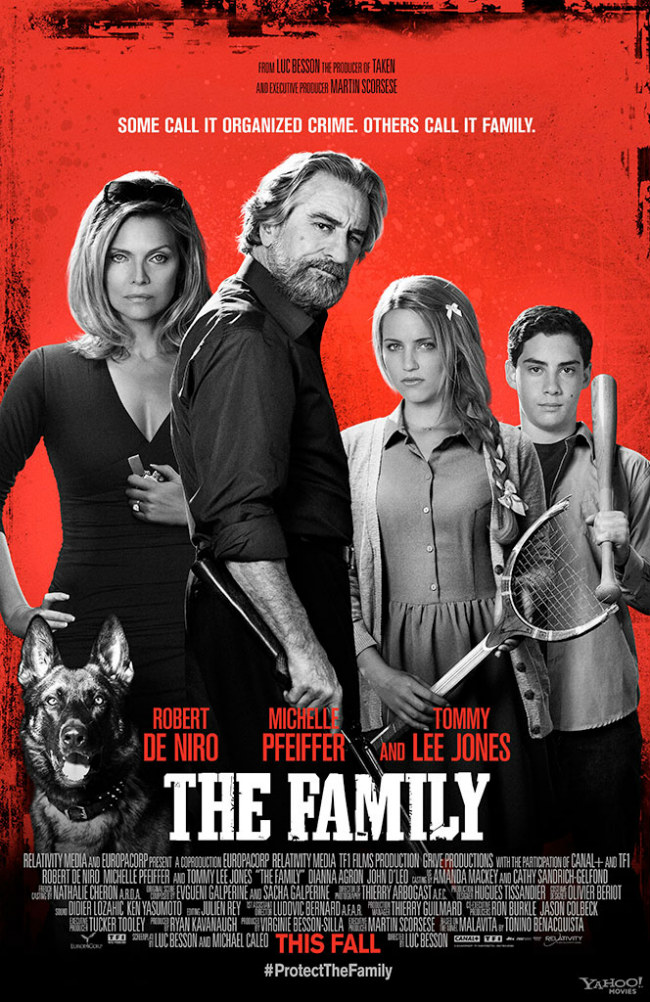