A disappointingly scattershot, sigh-inducing comedy from the creators of “Reno 911!,” Robert Ben Garant and Thomas Lennon, “Hell Baby” represents a slog through improvisation run amok. A horror comedy that doesn’t make hay out of lampooning the genre (which is totally fine), Garant and Lennon’s joint feature directorial debut seems downright allergic toward anything that might be construed as a legitimate throughline, lest that somehow be interpreted as “selling out,” and not subversive enough.

The story centers around Jack and Vanessa (Rob Corddry and Leslie Bibb), a married couple, expecting their first child, who move into a possibly haunted and certainly rundown house in an unsafe borough in New Orleans. There’s a weird dude, F’resnel (Keegan Michael Key), living in a crawl space in their home who tells them about all the murders committed there; then a grotesque old lady, Mrs. Nussbaum (Alex Berg), appears out of nowhere and sexually assaults a confused Jack, who fights her off, apparently killing her.

While this puts two inept detectives (Rob Huebel and Paul Scheer) in Jack and Vanessa’s orbit, the former also begins to wonder if his wife — who’s taken to spiking his drinks with paint thinner and exhibiting other odd behaviors — may have forces other than just stress acting upon her. Garant and Lennon, meanwhile, portray Vatican exorcists dispatched by Rome to, like, solve a mystery of in-utero evil or something.

“Hell Baby” is “just” a comedy, sure, but there’s simply not a lot of tension, discipline or consequence to the story, really. It’s just a bunch of lowest-common denominator wankery, without any sort of unifying aesthetic. (Even “dumb” generally coalesces around a couple central ideas.) It doesn’t help that it’s 70-plus minutes before Jack learns that Vanessa is possessed, but even when she slashes his stomach (offscreen, weirdly), there’s no immediate escalation of action. Editorially and structurally, the film is a huge mess, which makes its 94-minute running time feel interminable.

Garant and Lennon’s movie is also characterized by a screenplay that embraces digression, and scorns backstory. The latter is fine, but the tangential asides and other comedic indulgences herein don’t have the same warped silliness of something like ‘Billy Madison,” “Happy Gilmore” or Andy Samberg’s “Hot Rod,” which I underestimated upon its theatrical release. When “Hell Baby” descends into one of its extended superfluous riffs — Po Boy sandwich eating montages, group puke fests or juggling babies — it feels like a stalling technique as much as anything else. (And speaking of gratuitousness, as Vanessa’s Wiccan sister Marjorie, Riki Lindhome pops up to make a run at 2013’s Most Consecutive Seconds of Screen Nudity crown.)

The sad thing is that “Hell Baby” has some fine, funny folks in it. The array of familiar faces may make one want to take a flyer on this proudly oddball offering, but the curses you’ll be left uttering at the end won’t be of delight.

NOTE: In addition to its theatrical engagements, “Hell Baby” is also presently available across VOD platforms. 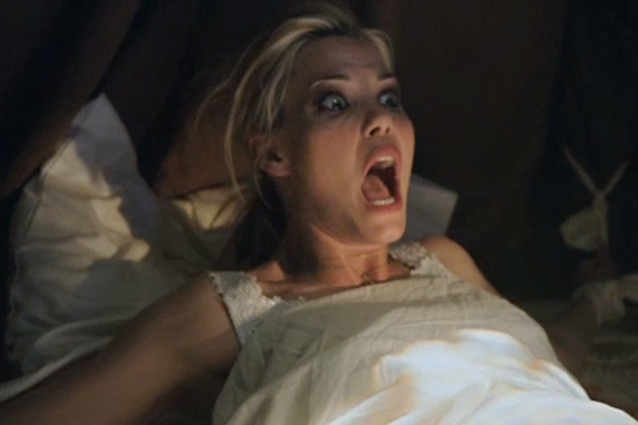