There is little doubt that the subject of kidnapping is ripe for filmed resonance. When prized family members are abducted, not only are the victims terrified: their families are likely to respond with extreme measures. One can imagine some people drugging themselves to sleep or oblivion while others take the opposite move of going ballistic.

There are three motives that kidnappers generally have. The more rational ones, e.g. the Somali pirates, simply want money and will release their charges as promised (see the Danish movie “A Hijacking” which takes us up close to the dangerous men and their terrified cargo). There are sexual predators seemingly compelled to capture generally underage children. Then there are those who abduct to fill a gap in their family structure. They don’t ask for ransom. They don’t even send notes to the families. Money is never the motif with “Prisoners.,” which has us believe that the other two motivations guide the criminals.

Denis Villenueve, whose résumé includes “Incendies,” a 139-minute look at twins who journey to the Middle East to find more about their family histories, now takes on the even longer “Prisoners.” Villenueve, who fills the screen with the usual twists common to police dramas, nonetheless breaks with the conventions of the genre to illustrate the ways that both kidnappers and concerned families share the need for violence, both prisoners of their own compulsions. He does so by using real violence which, despite its being used infrequently, is horrifying, all the more so because characters resort to physical means only now and then. There is nothing cartoonish or crazily edited, signs of similar films of a lesser quality. The pace is not overly swift, yet there are few moments that allow the audience to look away, to look at their watches, or to think about the latest messages on their iPhones.

What’s more the acting is terrific, particularly the give and take between police detective Loki (Jake Gyllenhaal) and the aggrieved dad of a six-year-old daughter, Keller Dover (Hugh Jackman). The ensemble are all spot-on providing top background for the movie’s moral center, which is that all of us under the proper circumstances could employ the violence of the criminals.

The characters are well developed, as they should be in a film that’s almost two and one-half hours long. Keller Dover (Hugh Jackman) and his wife Grace (Maria Bello) are being entertained by their friends Nancy Birch (Viola Davis) and Franklin (Terrence Howard) on Thanksgiving, feasting on the deer shot by the Dover’s son Ralph (Dylan Minnette). While the Dovers’ daughter Anna (Erin Gerasimovich) and the Birch’s young one Joy (Kyla Drew Simmons) are playing outside, they disappear, driving Keller particularly frantic. When the police bring in Alex Jones (Paul Dano), previously spotted in an RV near the Birch home, they fail to get a confession and must release him after forty-eight hours. This constitutional privilege does not gain Keller’s favor: he believes that the police are not up to doing the job and that he must take the law into his own hands.

Hugh Jackman, in perhaps his best role, performs as a survivalist, one whose basement is filled wall to wall with canned fruits and vegetables, water and propane, mirroring the view that many Americans form a paranoid society. He seems more in touch with the woodlands that with suburban Philadelphia, a trait that makes his physical actions against the alleged kidnapper credible. For his part, Franklin, though insisting that he is as concerned with getting his daughter back as is his best friend Keller, retreats from the kind of lawlessness that Keller believes is necessary to get a confession from Alex Jones. For his part Alex has been under the wing and in the household of his aunt, Holly Jones (Melissa Leo), allegedly because of an accident that deprived the brain-damaged Alex of his parents.

“Prisoners” was shot in the suburbs of Atlanta, with cinematographer Roger Deakins capturing the spirit of America’s Northeast on cloudy, dreary, winter days, some of which are inundated with rain. To show that violence has more effect on people than on Bugs Bunny or Tom from Tom and Jerry cartoons, the makeup team does a bang-up job on Paul Dano, closing both black eyes and covering his face and parts of his body in blood.

If you want to know what a family goes through when one of its own is taken away and presumed dead, you can’t get a better insight than by watching “Prisoners.” 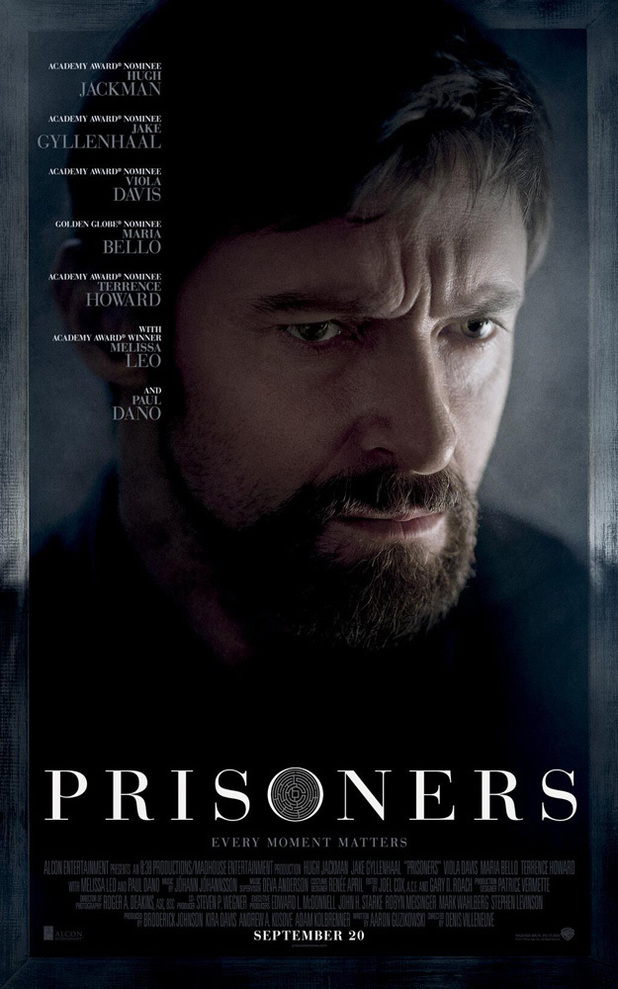