A Touch of Sin Movie Review

Take a look at your Lands’ End shirt. Where was it made? China? I thought so. How about your computer: by a company in Silicon Valley? Nope. China again. And your Rockport Pro-Walker shoes: China? Oops, Vietnam. We in America are shedding jobs of our own citizens because it’s so much cheaper to go to the Third World where workers e.g. in China making ten dollars a day (that’s sixty-one yuan) allows American corporations to give reasonably good buys to our consumers. Even here, the companies can hardly be expected to pass on all the savings to the customers, which means that capital, that’s shareholders, will maximize profit. That’s part of why there is so much income inequality in the U.S. (as Robert Reich points out in the excellent doc “Inequality for All”). And it’s the reason, as well, that Chinese capitalists, theoretically unknown in Mao’s China, are so much better off than their workers.

However, the workers are not going to take it any longer, at least not the low-level folks who toil eleven hours a day in The New China. That’s what we hear from Jia Zhangke’s “A Touch of Sin” from the director who gave us the documentary two years ago, “I Wish I Knew,” which focused on Shanghai residents from the mid-19th Century to the present and the stories they have to tell. “A Touch of Sin” is taken from today’s headlines in China but is a hybrid, not a documentary, which is to its credit. Jia Zhangke constructs an involved narrative for great audience interest, seemingly obsessed with the wages of sin, i.e. of inequality. His characters are frustrated. They realize that there’s no way of talking to the honchos of their companies and getting real results. They commit violence, or at least a small fraction of them do, for much the same reasons that some Americans turn violent as a way to shrug off their fierce resentments and gain satisfaction. In fact in the most interesting and yet the more spare of four episodes, each only tangentially related to the other, a man commits a series of murders which are not random but which are directed at people he believes have made their fortunes by stealing from the community.

In that story, a miner (Jiang Wu) fights a one-man revolution against corrupt capitalists in his village who, he claims, sold off the mines with the promise of distributing forty percent of the profits to the residents. That promise was forgotten. Instead, the change from communism to capitalism produced a fabulously wealthy guy with his own private plane and a Maserati, while others in the company, principally an accountant who cooks the books like Bernie Madoff, is asked at gunpoint to write a confession.

The narrative continues, focusing on a migrant worker (Wang Baoqiang) who, after shooting some would-be muggers on the highway, becomes a mugger himself, but not the kind we’re accustomed to on our shores who might grab a purse and run. That story is followed by treatment of a young factory worker (Luo Lanshan), who after being docked wages for causing an accident and is compelled to serve for at least two weeks without pay instead runs away looking for greener pastures. In the most elaborate production, lots of extras, dancers, even a street opera in full makeup that chastises a woman murderer as a sinner, a receptionist (Zhao Tao, who in real life is the director’s wife) in a fancy bordello catering to a rich clientele from Hong Kong, Taiwan and other parts. gains retribution on a rich arrogant customer.

The stories take place in a variety of locations; Shanxi, Chongqing, Hubei and Guangdong, from north to south, which had been the areas in which murders and suicide had taken place. The director, whose script won Best Screenplay at the Cannes Film Festival, draws inspiration from martial arts films to depict the raw, sporadic mayhem, but uses the features of that genre to construct a more artistic creation, a searing criticism of the China that has emerged as though out of nowhere to become a greedy, polluted cesspool of corruption and money-grubbing. 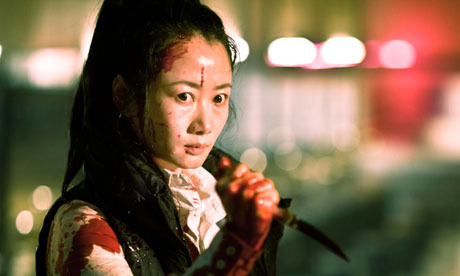