“Prisoners” is missing some pivotal story details, but has more than enough hauntingly superb assets to deliver a highly successful nightmarish experience.

It’s Thanksgiving and the Dovers are celebrating with their good friends and neighbors, the Birch family. After dinner, their young daughters, Ana and Joy, beg to head outside. Under the impression that they’d ask their older siblings to escort them, Keller and Grace Dover (Hugh Jackman and Maria Bello) and Nancy and Franklin Birch (Viola Davis and Terrence Howard) give them the OK. However, when the parents realize Ana and Joy never brought Ralph and Eliza (Dylan Minnette and Zoe Borde) along, they know something is terribly wrong. Panic turns to devastating dread as the hours pass and the girls fail to return home.

Detective Loki (Jake Gyllenhaal) is put on the case, confident he’ll maintain his pristine record and find Ana and Joy. He manages to pinpoint a suspect who was in the area at the time of the girls’ disappearance, but he isn’t able to accumulate enough evidence to keep him in custody. Outraged by the local authorities’ lack of progress, Keller opts to take matters into his own hands.

Before “Prisoners” taps into that nightmare, it reels you in through a subdued yet mesmerizing scene involving Keller and his son hunting a deer in the woods. Then, once you’re wholly consumed, it rips your heart out with devastating force by delivering the ultimate parental nightmare – a missing child. The sequence is handled brilliantly, offering up just the right amount of heartwarming holiday joy before turning the scenario into an absolutely crushing ordeal. By the time you get through the opening portion of the film, you’re emotionally exhausted, but also so broken and invested that you’re longing to see the situation through.

Trouble is, if you’re looking for clear-cut answers, you’re not going to get them and it can be frustrating. There are a number of small details that are either never explained or don’t quite connect and that essentially renders certain scenes, people, and props in the movie meaningless. However, the performances and flow of the narrative are so strong that “Prisoners” as a whole is an undeniably riveting watch.

Nancy and Franklin have a rather typical reaction. They’re heartbroken, but sit back and pray the police make headway. Grace is devastated to the point that she turns to sedatives, so spends most of the film in bed. But then there’s Keller who does the unthinkable and that’s what makes “Prisoners” a standout abduction film. Keller absolutely loses it when Loki doesn’t bring him results, and Jackman has no trouble essentially turning Keller into an entirely different person and making you believe the transition. Keller starts off as a strong, loving family man, but then becomes a vicious monster of sorts. It can be quite frightening, but Jackman maintains just enough of Keller’s humanity to keep him likable amidst his vengeful rampage.

This creates a highly unique relationship between Keller and Loki. It’s almost like an antihero versus antihero duel. Keller’s actions are clearly unlawful, but his motivations are so understandable and noble that you want him to succeed. Then there’s Loki who’s abiding by the law, but making little progress and starting to crack. It’d be great if he could solve the case without breaking any rules, but for his sake and the girls’, you can’t help but to want him to throw legality out the window and just do what it takes to get them back. On top of that, there’s the connection between the two. They understand each other’s motivations, but are on conflicting paths. And then, of course, there’s an actual bad guy in play, too. There’s a lot going on, but writer Aaron Guzikowski uses a compartmentalized format of sorts and maintains a strong forward flow, allowing you to absorb all the details effortlessly.

However, that’s not to say that all of those details are developed enough. There’s a naturalism that comes with not getting all of the answers because in real life, when do we really get all the answers? But in the case of “Prisoners,” the fact that certain portions of the story are left unexplained takes away from the big picture.

On the technical front, Roger Deakins is the standout. “Prisoners” is easily one of the most beautifully filmed pieces of cinema this year. There’s this wide shot of the Keller’s arriving at the Birch home that gains an exceptional amount of dimension courtesy of a slow push towards a tree obscuring the frame. Then there’s the shot of both families standing in the living room just when it starts to sink in that the girls might have been taken. All six people fill the frame and then your heart sinks as the room empties out. “Prisoners” owes a great deal of its success to Deakins’ work.

Overall, “Prisoners” lives up to the hype. The minor plot deficiencies do keep the film from being as haunting as it could have been, but between the camerawork, performances, and subject matter of the film, it’s undoubtedly got the power to gnaw at you well after it ends. 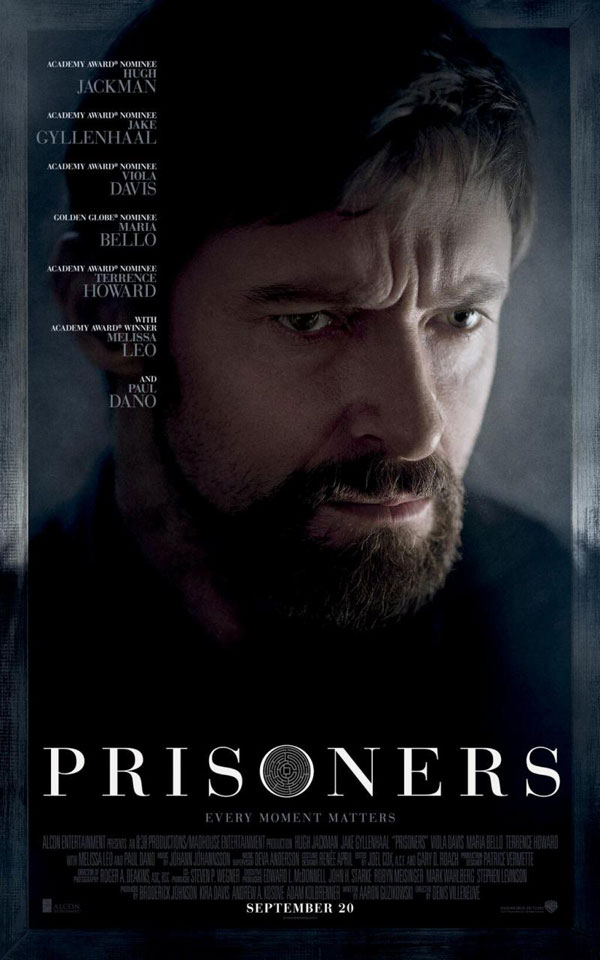