The will and courage to compete in Formula One racing is extremely unique, but thanks to Ron Howard, Chris Hemsworth, and Daniel Brühl’s work, you can feel the fear, desperation, and passion involved in “Rush.”

Based on the true stories of racing adversaries, Niki Lauda (Brühl) and James Hunt (Hemsworth), “Rush” tracks their rise from Formula Three to Formula One where the two go head-to-head in the highly controversial 1976 season during which they battle through an unprecedented rivalry filled with bold driving tactics and life changing decisions.

“Rush” turns the feel-good sports movie subgenre on its head. There are a number of familiar elements and sentiments within “Rush,” namely Hunt’s playboy verses Lauda’s hard worker and a slew of revelatory victories, but nothing in this film can be taken at face value. It delivers the necessary common beats, ensuring it’s an entertaining piece from beginning to end, but thanks to Ron Howard’s impeccable visuals, Brühl and Hemsworth’s noteworthy performances, Peter Morgan’s beautifully layered script, and the downright rousing sound design, “Rush” offers an exceptional range of emotion.

Morgan’s penned the ideal duel protagonist film. Lauda is a mechanical genius, dedicated to winning through old-fashioned hard work, while Hunt is a hotheaded showoff convinced that his victories will come from being the one to go bold and take the bigger risks. While it is easy to place the two men in boxes for a short description’s sake, in the full feature, they extend well beyond clear-cut facts and overlap in unexpected respects, something that facilitates stronger arcs for each individual, but also one for their joint relationship, too.

A wrong look, a sudden car malfunction, and you’ve got the start of a vicious rivalry, but a sport-specific one. There’s no fistfights or childish taunts. Every spat either takes place on the track or within the context of Formula One and that further highlights both Lauda and Hunt’s deep respect for the sport and the rules. At one point, Hunt manages to beat Lauda, but then Lauda points out an irregularity on Hunt’s car and Hunt loses the win. It sounds like a selfish way to steal the victory, but, in context, the move is irrefutable because Lauda is devoted to the rules. However, that’s not to say that you won’t feel sorry for Hunt, and it’s these dichotomous situations that make “Rush” particularly engaging. The experience is so much more than just sitting back and waiting to see who wins the big race.

“Rush” is also somewhat of a coming-of-age story. Lauda and Hunt begin as immature amateurs and, over the course of the film, you get the chance to watch them grow up in tandem, an exceptional challenge for Brühl and Hemsworth as they’re not only worrying about their own character’s growth, but also how that growth is effected by their relationship. The two clash often, but their personalities also fit together like puzzle pieces. Hunt is reckless, but passionate and Lauda is abrasive yet dedicated. Their assets and deficiencies link perfectly, delivering a remarkably fulfilling connection.

And, of course, “Rush” is a racing movie and, appropriately, rocks a number of riveting action sequences. We get a well-constructed depiction of the race, ensuring the viewer always has a comprehensive understanding of the geography in addition to just enough close-up shots to raise the stakes by showing how both Hunt and Lauda feel about their current positions. However, the standout element here is the sound design. It pulls you in through that iconic pre-race engine revving and then practically puts you on the track by delivering an exceptionally meticulous soundtrack of mid-race noises from gear shifts, to pedal pounding, to heavy breathing, and more.

“Rush” is a deeply immersive experience all-around. You get the thrill of high-speed action and, even more gratifying, the chance to walk alongside two racing legends during an intensely profound time for the sport. Every person is driven by his or her own particular passions and in the case of Formula One racing, the passion to compete in such conditions is highly rare, so the opportunity to feel what it’s like to be so driven that you’re willing to risk your life for the win is what makes “Rush” so exhilarating. 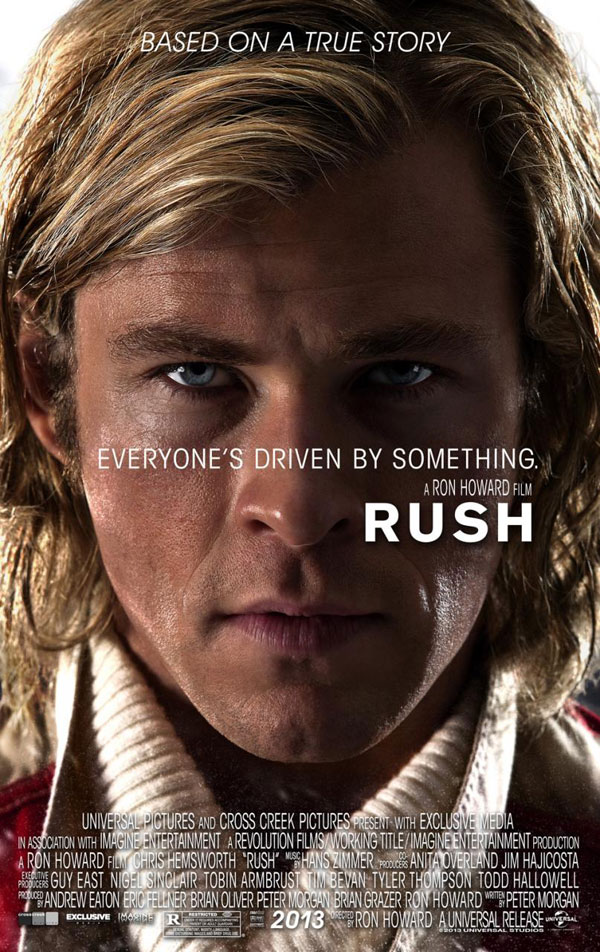