Title: Money For Nothing: Inside the Federal Reserve

The Federal Reserve is charged with controlling the United States’ monetary supply, regulating banks and setting interest rates. But prior to the financial collapse of 2008 and the quixotic quest of marginalized Republican presidential candidate Rand Paul to alternately audit and/or abolish the Fed, you’d have been hard-pressed to find more than one in 10 Americans who could tell you those facts, let alone articulate a cogent opinion on it. With his new documentary, director Jim Bruce aims to change that. Narrated by Liev Schreiber, “Money For Nothing: Inside the Federal Reserve” throws a light on the most powerful financial institution on Earth, serving as an invaluable civic resource.

Markets around the world pay close attention to every action and utterance of the Fed Chairman, and have even more so ever since the abolishment of the gold standard (meaning paper dollars’ linkage to a fluctuating market price of that precious metal) in 1971, under the Nixon Administration. In a clear-eyed, non-partisan fashion, “Money For Nothing” (funded in part, ironically or depressingly, by Bruce’s short trades on financial stocks) does a good job of sketching out the history of the Fed, and how too often short-term benefit and/or political considerations get a hearing with the supposedly air-tight and independent body of regional presidents, or governors, that comprise the institution.

It’s a different animal than last year’s “The Gatekeepers,” director Dror Moreh’s nonfiction examination of the Israeli Shin Bet security agency, but “Money For Nothing” strikes a similar chord of slack-jawed amazement because it isn’t some clamorous document of outsider rage. That film had interviews with all of the living former agency heads who prosecuted a harsh anti-terror policy against the Palestinian people that many agree crossed a line of human decency. Comparably, “Money For Nothing” isn’t short on hard-edged self-reflection and insights. In addition to the expected assortment of economists, authors, investors and financial historians, Bruce also secures interviews with a remarkable array of former and current Fed officials, from former Chairman Paul Volcker to current Vice Chair Janet Yellen, whom many believe has the inside track to succeed departing Chairman Benjamin Bernanke.

On the one hand, the human face these interview subjects put on the Federal Reserve is very helpful and important. The Fed isn’t some conspiratorial organization worthy of a Dan Brown novel; it’s made up of real people. On the other hand, learning about some of their attitudes and beliefs, and their decision-making process is… well, often scary and depressing, in equal measure. This is especially true of the tenures of Alan Greenspan and the aforementioned Bernanke, in the decade-and-a-half leading up to the 2008 financial collapse.

The Fed is generally expected to lower interest rates based on problems and bubbles in the real economy, but the “Money For Nothing” makes clear the dangerous precedent set by Greenspan’s drastic lowering of rates during the Wall Street crash of October 1987. In essence, that meant that the Fed was now beholden to the whims of the stock market as well, and was to serve as its protector. While Greenspan was for a long time deified for his steady stewardship of the economy, the reality was that a mindset which socialized the risk of the rich had taken hold; Wall Street financial firms, merely following the incentive structure very clearly indicated by the Fed, would dream up and indulge in ever more complicated derivatives trading, among other things. Eventually, this would dovetail with an overheated housing market that would then balloon into the greatest credit bubble in world history.

As informative as it is, there’s a gut-punch sadness to “Money For Nothing,” then — a melancholic dawning. It puts something of a sour spin on capitalism and the undue attention and coddling the United States heaps on a sector of the economy that creates nothing. Bruce, leaning heavily on a score by composer Nora Kroll-Rosenbaum, attempts to negotiate an emotional soft landing of sorts, pointing out various mechanisms of adjustment and consideration. It only works up to a certain point, though, since meaningful and protective Wall Street banking reforms have not been enacted over the last five years. While fantastically enlightening as it relates specifically to the Federal Reserve, the chief parallel takeaway of “Money For Nothing” is something that is also evident in other walks of life: money talks, and there’s a well-heeled elite class that has a private line.

NOTE: In addition to its theatrical engagements in New York, Dallas, Boston, Washington D.C., Chicago, Minneapolis, Denver, Houston, Richmond and Kansas City, “Money For Nothing” opens in Los Angeles at the Laemmle Monica 4-Plex, where Bruce will be on hand for an in-person Q&A on opening weekend. For more information, visit www.MoneyForNothingTheMovie.org. 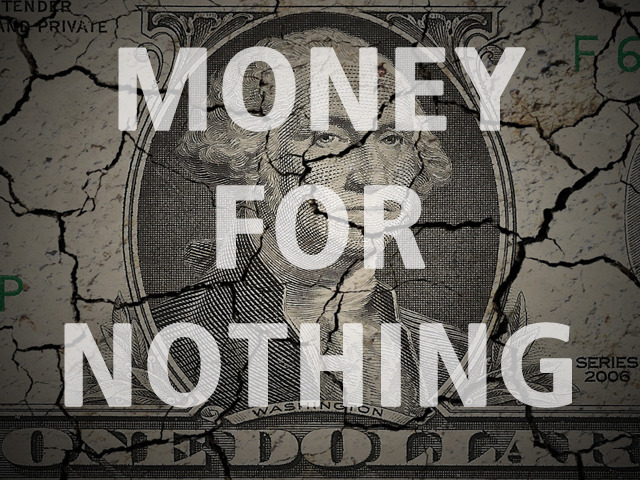