Time travel in “About Time” functions as highly entertaining and amusing component, but it’s also embedded in a barrage of tremendously honest and relatable drama that makes it a deeply affecting experience worth taking with you well after the credits roll.

Upon turning 21, Tim’s (Domhnall Gleeson) father (Bill Nighy) lets him in on a family secret – all of the men in their family possess the ability to travel back in time. After hopping into a dark closet and clenching his fists, Tim learns that this is no joke and sets out to use his newfound ability to achieve his primary goal, to find a girlfriend. While all the redos in the world do give Tim the ability to improve his life in various respects, the gift has its limits.

As someone in her mid-20s looking for “the one,” finding her footing within her career, and on the cusp of establishing a life of her own, “About Time” is overwhelming in the most wonderful way imaginable. That’s not to say that a moviegoer at any other stage in life can’t feel the effects of Richard Curtis’ directorial swan song, but as someone who drew an instant connection to the chain of events, “About Time” is a film I’ll never forget.

Didn’t expect that reaction to something billed as a romantic dramedy, did you? The “About Time” promotional campaign sells the time travel and lovesick shtick well, but the trailers only scratch the surface of the film’s profound emotional core. But before the narrative treads into heart wrenchingly brilliant territory, it does function as a highly effective and charming comedy.

If anyone can convince an audience that time travel is possible, it’s Gleeson and Nighy. The pair’s timing and honest connection is so powerful that you won’t give the legitimacy of the scenario a second thought and then, once you’re in the time traveling swing of it, “About Time” delivers laugh after laugh, sustaining what could have turned into a lame gimmick.

It also helps that Curtis penned a nearly impeccable script. Everything from the sequences of events to the dialogue to the astronomical build brings the film to its maximum potential. There are loads of unforgettable quips, most of which come from Nighy, as well as some staggeringly honest lines of dialogue to hold onto. Proving the text is above and beyond is one particular scene that takes place entirely in the dark. You can barely see a single thing, but the banter between Tim and Mary (Rachel McAdams), his optimal love interest, is truly vibrant.

Not only is that meet cute highly original, but Gleeson and McAdams share an exceptional chemistry from beginning to end. This is standout work for McAdams. At this point, she’s such a familiar face, it can be difficult to dissociate the star from the character. However, here, with the support of strong writing and a stellar co-cast, Mary becomes her own entity, and a particularly delightful one at that.

And that’s the case with the large majority of the characters in “About Time;” they’re all so likable. The thought of a film lacking severely flawed characters seems like a flaw in and of itself, but it’s vital to the film’s success. Part of the reason why “About Time” earns such an emotional response is because all of the people involved are kind, caring, and a pleasure to be around. Had Curtis amplified Tim’s bumbling demeanor or Tim’s mother’s (Lindsay Duncan) abrasive behavior for example, the film could have tread into melodramatic territory and extinguished the purity of the experience. Tim’s sister, Kit Kat, (Lydia Wilson), is the only character to test the limits in this respect. She’s quirky to the max, but in a charmingly innocent way. Kit Kat’s dark and dramatic turn could have been too drastic, but Wilson nails the transition and then Curtis artfully sweeps the scenario into the bigger picture in a way that gives the event itself even more weight and intensifies Tim’s journey, too.

Kit Kat’s predicament also serves as a much-needed stepping-stone towards the third act of the film. If you’re susceptible to tearjerkers, hold on tight to that box of tissues because Gleeson and Nighy will break you down, give you a little breather and then do it all over again. No one wants to sob away an afternoon, but in the case of “About Time,” the film earns each and every tear and offers a cathartic effect.

Everyone should see “About Time.” It leaves you emotionally exhausted but also stimulated and thrilled to get back out into the world to forge forward, and what better way is there to walk out of a movie than that? 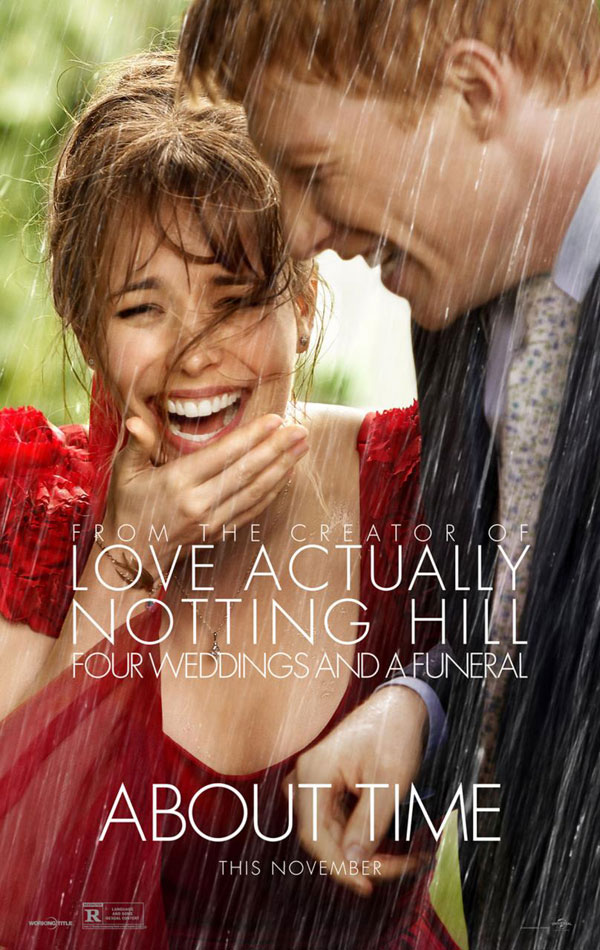