An artificial intelligence program somehow becomes sentient and starts killing off computer hackers who have knowledge of it and have intended to destroy it. It’s up to a reporter, a young hacktivist and a FBI agent to track down a reclusive hacker on the A.I.’s hit-list in order to band together and take the program down.

Imagine the cult 90’s movie Hackers, and then a what-if scenario where all of those characters were hunted down and murdered by a sentient A.I. That would be an alright movie if that movie was Delete. Unfortunately this film was slow and filled with bland drama. It was also pretty far fetched. The cops go after our 3 heroes as if they are mindless androids with a prime directive. Does the writer have a hatred of authority figures that they wrote them to be a bunch of violent robots? Yes they are given orders, but they also have free will. Probably the dumbest parts in the film was when the A.I. attempts to manipulate the director of the NSA (Bellows) by threatening to turn off his daughters pacemaker via remote, and when he fails in his assignment, the A.I. kills him with his own cell phone. Wasn’t this done in another movie already? He already knew his daughter was out of harms way, why use the cell phone knowing the A.I. is capable of anything? Seth Green’s character Lucifer thinks he can take on a horde of NSA dudes in Kevlar with his one panel pegboard of guns?  Can anyone explain why they kept it as a 2 parter on a DVD, especially since it’s all on one disc?  The film is so monotonous, I almost didn’t want to click the 2nd part.

The story paints a picture that we as a people are too dependent on technology. I still remember what it was like before cell phones and the internet, it sucked, but we did alright. If somehow it was all gone tomorrow, we’d be okay. The only age bracket that this scenario would terrify is internet generation, because they would have a much tougher time dealing with it, but they’d eventually adapt.  In the cast interviews, Seth Green jokes about what he thinks would happen to New York, Canada and L.A. if technology was suddenly eliminated; and almost sadly what he says is probably true. 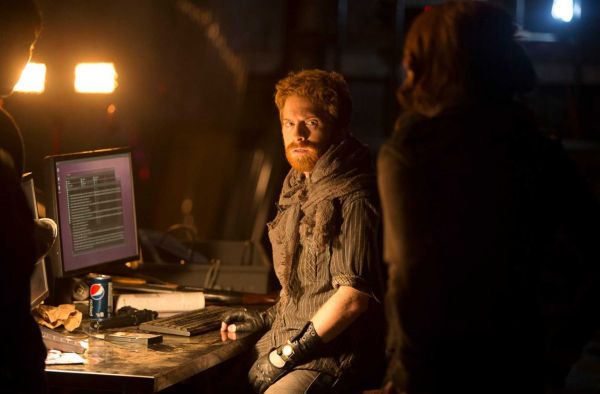