Standing up for yourself and your closest friend as you both struggle to find your identity during the most defining moments of your adolescence can be a challenging, confusing and life-altering experience for many teens. Trying to figure out where you fit into society, while remaining true to yourself, as your peers target you for your unique qualities can be traumatizing for some teens, while others remorselessly attack their tormenters right back. The new drama ‘The Dirties,’ which marks the feature film writing-directing-producing-acting debuts of Matthew Johnson, shows the drastic measures one best friend will take against the bullies in his school, prompting the examination the effects intimidation has on students.

‘The Dirties,’ which is set to be released tomorrow in theaters and on VOD, follows best friends Matt (Johnson) and Owen (Owen Williams), who live in a world of endless movie references and hijinks. It would be perfect, if not for the cruel bullies at their high school who make their lives hell. While working on a movie for class, the lines between fiction and reality blur together in this horrifying look at high school bullying.

Johnson generously took the time recently to talk about filming ‘The Dirties’ over the phone. Among other things, the writer-director-actor-producer discussed how serving as a producer on the drama allowed him more creative freedom while directing; how releasing the film on VOD will allow viewers to rewatch scenes they enjoy, and appreciate the small jokes he included in the story; and how he hopes the movie will bring comfort to people who feel like they’re alone and bullied.

ShockYa (SY): You co-wrote the script for ‘The Dirties’ with Evan Morgan. How did you two come together to write the screenplay together, and where did you come up with the idea for the storyline?

Matthew Johnson (MJ): Well, the idea actually came from our friend, Josh Boles. He had watched a Belgium film called ‘Man Bites Dog,’ which is about a serial killer. He then called me and said we should make a movie about a serial killer, except it should be about kids.

Then Evan and I took that original story. On set, we re-wrote ideas for scenes, but we never wrote a script. There were just ideas on cue cards.

SY: Besides coming up with the idea for the story, you also directed the drama. Was it always your intention to helm the film as you were writing the film’s outline, and do you feel that scribing the outline helped you in your directorial duties once you began filming?

MJ: I guess so. I think directing a movie like this is an amorphous thing. I was in every scene, and was trying to control the chaos around us as best as I could.

I never really thought about what it was going to be like to direct a movie like this; I just thought we were going to make it the same way we made our web shows before. There were only four of us on set at one time, so it wasn’t like there was anyone barking orders, or saying action or cut, or coming up with a big plan. You just go with it and react as best as you could.

SY: Besides acting in, writing and helming ‘The Dirties,’ you also produced the film. Why did you decide to produce it as well, and did producing the movie influence the way you directed and acted overall?

The idea that we have producer credits is a farce, but it was important, because no one was telling us that we had to do things a certain way. So it influenced the directing and acting, because it meant that we could do whatever we wanted with immunity.

SY: Speaking of having that lower budget, what was the experience of making the movie independently like overall?

MJ: Well, we didn’t really know any other way, so to us, it was just friends messing around, making a movie. We didn’t have anything to compare it to. So in our minds, it was just a big inside joke, and we were just filming it whenever we weren’t working or at school. We had never worked on a bigger movie, so this was the only way we could do it.

SY: ‘The Dirties’ not only had its world premiere at this year’s Slamdance Film Festival, it was also the winner of Best Narrative Feature and the Spirit of Slamdance Award. What was your reaction when you found out the movie would be playing at the festival, and that it won the awards?

MJ: When I found out we were accepted, it was one of the best days of my life. I was really excited, and they called me when I was in class. I was jumping for joy, because I was so happy. I really caused a disturbance in the classroom. When we were there, it was a lot of fun. We met a lot of really great people.

SY: After the film played at Slamdance, Kevin Smith made it one of the first films debuting through his new Kevin Smith Movie Club distribution company. What was your reaction when you found out that Kevin not only liked the film, but also decided to distribute it through his company?

MJ: It was a great experience, and we felt lucky and a little embarrassed to be getting all this attention. But I really thanked my lucky stars when we got the news. It’s really changed my life, and now I’m feeling very lucky and quite happy.

SY: The film is opening on VOD and in theaters across the country. Are you a fan watching films on VOD, and do you think the platform is beneficial for independent films overall?

MJ: I think this film, in particular, is the perfect movie to watch on VOD. It’s like this high school project as you’re watching these kids making the movie in this calm, quiet way. The secretiveness and quietness of being able to watch it in your own home on a little screen is quite thrilling.

You can pause it when you think something’s funny, or rewind it when there’s something you want to watch again. This movie is filled with small jokes, and I don’t think people talk about the small jokes. So I think VOD is a great opportunity for people to watch the jokes twice.

MJ: Next, I want to make a web series about some of the side characters from ‘The Dirties,’ if I can. But I don’t have the plans to do that yet, but that’s a dream project for me. I also think I’m making a movie about the moon landing, but that’s not until next summer.

Q: Would you be interested in making a bigger budget, studio film in the future, or do you enjoy making independent movies?

MJ: Well, I’ll have to continue making independent films until someone decides to give us enough money to make a big one. I’m still in film school in Toronto, so I don’t see us making a big Hollywood movie anytime soon, but I hope we can in the future.

Q: Speaking of being in film school, are there any lessons that you learned while there that influenced the way you made ‘The Dirties?

SY: That’s a tough one. I think you learn how to make movies very fast, because in film school, you only have a few days to make most of your movies. That helped, because it taught us how to work very fast.

Q: Since October is National Bullying Prevention Month, and the film is opening tomorrow, do you hope the movie can bring awareness about bullying to children?

MJ: I hope so. When we first started making the movie, we didn’t expect it to get much attention. Now that it has received attention, we’re flattered that our experiences in school have been so universal, and people seeing the film have connected with the story in a lot of ways. So I hope it will bring comfort to people who feel like they’re alone, and show them that there are other people like this who are doing things to help themselves out of being bullied. 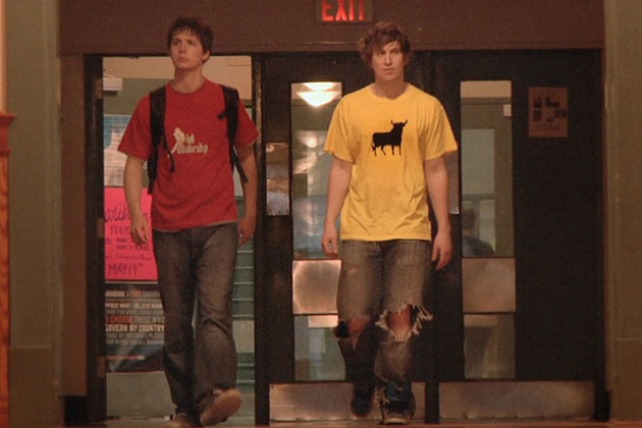 Cancel reply
Enter to Win a Blu-ray Copy of After Earth From ShockYa!
Box Office Predictions: The Big Money to Drift Towards Gravity
To Top