Dexter: The Complete Final Season and Series to be Released on Blu-ray

‘Dexter: The Complete Final Season’ and ‘Dexter: The Complete Series Collection’ are set to make a killing in their upcoming home releases, as both will arrive on November 12 on Blu-ray and DVD. CBS Home Entertainment and Paramount Home Media Distribution are set to release the discs, which features Michael C. Hall in his Golden Globe and SAG-Awarad-winning title role on the Showtime series.

‘Dexter: The Complete Series Collection’ includes all eight seasons of the acclaimed Showtime mystery crime drama, in an ultra-collectible recreation of the blood slide lead character Dexter Morgan used to catalog his victims. The collection ‘Grafix: The Art of Dexter,’ which features photos, fan artwork and iconography and images used in the show’s promotional campaigns will also be featured in the collection.

The series’ collection will also offer an all-new bonus disc with access to over three hours of behind-the-scenes interviews and featurettes. The bonus material, which is available for the first time on Blu-ray and DVD, explores the series and highlights the new documentaries, ‘The Evolution of Dexter Morgan’ and ‘The Code.’

Amazon is also offering an exclusive complete collection for the show, which will be sold in a collectible bust/head packaging, representing an anonymous Dexter kill. The 25-disc Blu-ray and 33-disc DVD of ‘Dexter: The Complete Series Collection’ will sell for the suggest retail price $427.99 and $352.99, respectively.

‘Dexter: The Complete Final Season’ will feature the last 12 episodes of the hit series. The three-disc Blu-ray and four-disc DVD will retail for $69.99 and $57.99, respectively. 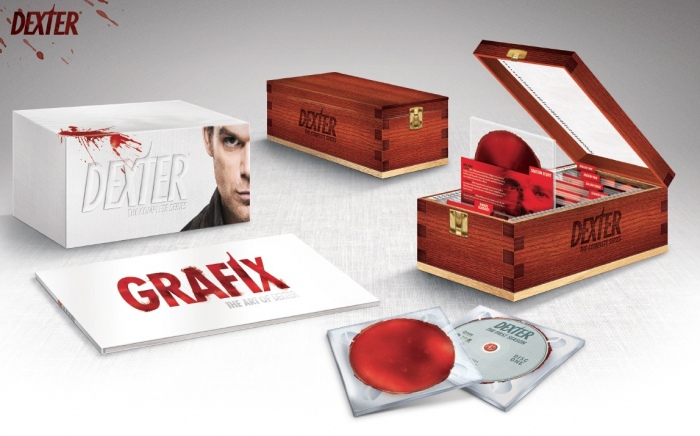