Apologies for the delay in delivering your weekly Movie News Cheat Sheet, but three full days in an Alamo Drafthouse will do that to you.

Interested in checking out what went down at the fourth annual Mile High Horror Film Festival, finding out which iconic Disney villain is getting her own live-action film, and more? It’s all right here in your Movie News Cheat Sheet.

1. Mile High Horror Film Festival: The Mile High Horror Film Festival in Denver, Colorado is still in its formative years, but the event is inching its way closer to becoming a particularly successful US celebration of the horror genre. This year, the festival included screenings of “The Exorcist,” “Dawn of the Dead,” “Hellraiser,” and “They Live” with in-person appearances by Linda Blair, Tom Savini, Roddy Piper, Doug Bradley, Ken Foree, and more. As for the films in competition, “Cheap Thrills” and “Big Bad Wolves” came out on top, tying for the festival’s audience choice award while “The Seasoning House” took the critics’ choice honor. The festival also featured six programs of short films, which included critics’ choice winner “Vienna Waits For You” and audience choice winner “Killer Kart.” This event is absolutely brimming with genre achievements, the most profound of which is the feat of amassing a sizeable community of horror diehards in the Littleton Alamo Drafthouse for a full weekend of honoring icons and celebrating up and comers.

2. First “Ender’s Game” Clip: After “Beautiful Creatures,” “The Host,” and “The Mortal Instruments” flopped, could “Ender’s Game” be the one to get this year’s crop of young adult book-to-film adaptations back on track? Based on this first clip, it could be a toss-up. The scene serves as a decent introduction to the title character, but doesn’t make for a particularly compelling moment – at least out of context. Hopefully we’ll get a peek at some bolder scenes prior to the film’s November 1st release.

3. YA-to-Film Release Date Shuffle: In other YA-to-film news, we’ve got three highly anticipated properties with new release dates worth marking down. First is John Green’s “The Fault in Our Stars.” Production is still underway, but the film will be ready for a June 6, 2014 release. That puts the adaptation up against Tom Cruise’s “Edge of Tomorrow,” but considering there’s zero genre crossover, the film should be in good shape. Our second YA film making moves is “The Maze Runner.” Originally the film was locked for a February 14, 2014 release, but Fox opted to uproot it and plop it back down in the September 19, 2014 slot. Even though mid-September isn’t prime moneymaking time, that date makes much more sense considering the content of James Dashner’s book, which isn’t particularly Valentine’s Day friendly. It’s also worth noting that “The Book Thief” is moving up a week. By ditching its November 15, 2013 spot in exchange for a November 8th debut, it’ll have more time to breathe until “The Hunger Games: Catching Fire” demolishes the box office, but it could still feel the effects of “Ender’s Game.” (via Box Office Mojo)

4. Saoirse Ronan Talks “Star Wars:” Early chatter that Saoirse Ronan auditioned for “Star Wars: Episode VII” was branded a rumor, but now the actress herself has confirmed that she did indeed read for a part. After telling Sky News that she did have an audition, she added, “so has everyone.” When the outlet tried to dig deeper, Ronan noted that the filmmakers would “chop off her head with a light-sabre” if she spilled too many details. However, while talking to Empire, Ronan did expound by explaining, “So many people I know have gone in for the part I’ve gone in for, and guys who’ve gone in for a particular part, so I’d imagine J.J. is probably just scanning the earth to find the people that he needs.” Ronan also pointed out, “Nobody has a clue what it’s about, and nobody’s read the script.”

5. Samuel L. Jackson Says Elizabeth Olsen is Scarlet Witch: There’s been talk of Elizabeth Olsen joining the cast of “Avengers: Age of Ultron” as Scarlet Witch for quite some time now, but Walt Disney Pictures and Marvel Studios have yet to confirm her casting. However, thanks to Samuel L. Jackson, that rumor is starting to inch closer to being proved true. Jackson told The Wall Street Journal, “I don’t think we begin shooting before March of next year. I know we’re shooting in London, that James Spader is Ultron and going to be the bad guy, and that we added Ms. [Elizabeth] Olsen [who will play the Scarlet Witch], but I don’t know what she’s doing, if she’s on the inside or the outside. I haven’t seen a script.” Again, there’s no official word regarding whether or not Olsen has signed on the dotted line, but it does seem strange for Jackson to have made such a statement if her casting wasn’t the real deal.

7. New “Chronicles of Narnia” Film Moves Forward: Even though the “Chronicles of Narnia” films have seen a sizable decline at the box office over the years, The C.S. Lewis Company officially announced that they will team with The Mark Gordon Company to develop and produce a fourth installment, “The Chronicles of Narnia: The Silver Chair.” The book’s narrative picks up decades after “The Voyage of the Dawn Treader” in Narnia, but that means just a year has passed in England. When King Caspian’s son goes missing, Aslan calls in Eustace Scrubb (played by Will Poulter in “Voyage of the Dawn Treader”) and Jill Pole to find out what happened to him. Don’t expect “The Silver Chair” to hit theaters anytime soon because as pointed out by the C.S. Lewis Company’s director, the project is still in the very early stages. Vincent Sieber explained, “We are very excited by this partnership and to be able to work on this movie from its earliest conception on such a collaborative basis. It gives us the opportunity to develop a script and then produce a film with some of the most talented industry professionals whilst remaining completely faithful to this much loved book.” (via The C.S. Lewis Company)

8. Cruella de Vil to Get a Solo Film: Now that Maleficent has her own feature film, it’s on to a different Disney villain – Cruella de Vil. As reported by THR, Disney recruited “Cinderella” and “The Devil Wears Prada” scribe Aline Brosh McKenna to pen a script featuring a live-action version of the “101 Dalmatians” baddie. While Glenn Close will not return to reprise the role, she actually is on board as an executive producer.

9. Trailers: “I, Frankenstein,” “Jack Ryan: Shadow Recruit,” “The Hobbit: The Desolation of Smaug:” “I, Frankenstein” landed the seemingly ill-fated January 24, 2014 release slot and now it’s got a lame official trailer to match. Even though the film’s name and budget should have earned it a summer slot, based on the cartoonish action and creature clips in this video, it’s no wonder Lionsgate opted to dump it early in the year. The new trailer for “Jack Ryan: Shadow Recruit,” on the other hand, is oozing with incredibly visceral action. However, impressive combat movies are a dime a dozen. Now the challenge will be differentiating it from the loads of other spy movies with wildly realistic fight sequences. Last up is the new trailer for “The Hobbit: The Desolation of Smaug.” This one doesn’t need a strong promotional campaign to draw a crowd, but it’s still disappointing that a trailer for such an iconic film franchise with such widely adored characters isn’t chill inducing in the least.

10. Box Office: “Gravity” didn’t just dominate the box office; it blew it away. The film’s $55.8 million opening marks both George Clooney and Sandra Bullock’s strongest starts yet. “Cloudy with a Chance of Meatballs 2” couldn’t match the first film’s minimal 17.4% weekend one to two drop, but its 38.4% loss did give it another $21 million to take to the bank. Newcomer “Runner Runner” secured the third spot, but with a very disappointing $7.7 million start. Fortunately the film did manage to pull in $23.4 million overseas, already putting it over its $30 million production budget. Even though there was a chance that “Rush” could have overtaken “Prisoners,” “Prisoners” held on strong enough to snag the #4 spot. It dropped 47.1% to post a $5.7 million weekend three haul whereas “Rush” dipped 55.3% and only managed to take $4.5 million in its third weekend out. (via Box Office Mojo) 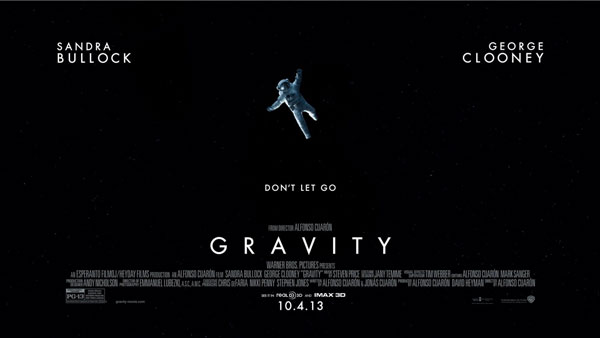