No mere hagiography, director Evan Jackson Leong’s engaging new nonfiction film “Linsanity” charts not only the amazing success story of its subject, NBA basketball player Jeremy Lin, but also emerges as a multidimensional portrait of his character, work ethic and religious faith. Commingling hearty seams of tabloid frenzy, familial roots, underdog uplift, racial identity and nose-to-the-grindstone occupational doggedness, “Linsanity” is a movie with a lot on its mind, but a solid vision as to the essential, interwoven elements of Lin’s astounding tale.

For non-sports fans, Jeremy Lin’s story is the closest thing in real life to the meteoric rise of Willie Beamen, as depicted in Oliver Stone’s “Any Given Sunday.” In that 1999 film, an anonymous third-string quarterback becomes a rich, adored multimedia sensation over the course of several games and a few short weeks. Despite there being a lot to like about the movie, at the time I tore into it a bit, particularly this baseless and seemingly unreasonable element of elevation to fame. Errr… whoops?

In February 2012, Lin — after having been waived twice within two weeks, by the Golden State Warriors and Houston Rockets — got a shot with the New York Knicks. With time running out on a temporary, two-week contract, and the Knicks beset with injuries, Lin was thrust into the starting line-up at point guard, with the thinking being that he would be cut after one or two games. Scoring more points over his first five games than any player in NBA history, however, Lin totally ignited his team, knocking down dramatic game-winners and sparking the Knicks’ longest win streak in over a year. For several weeks, he absolutely owned ESPN, and there was plenty of mainstream, non-sports coverage of his out-of-nowhere ascent too. “Linsanity,” it was dubbed.

Leong’s movie has the good sense to make this hook-y rocket ride its narrative spine, which helps for the sports-nut viewer who wants to relive it in burnished detail. And it’s aided greatly by loads of video footage and easygoing interviews with Lin during that actual time, from inside the bubble. But the filmmaker also has access to Lin and his family — including dad Geiming and mom Shirley, both 5′ 6″, as well as older brother Joshua and younger brother Joe — which helps sketch out a compelling parallel tale to stand alongside Lin’s New York minute. (He’s now signed a long-term contract with one of the old teams that cut him, the Rockets.)

Part of the media swirl in 2012 had to do with Lin’s race, of course, and the fact that as the only Asian-American player in the NBA, his success was shattering stereotypes about what an elite hoops point guard looked like. “Linsanity,” though, cannily reveals the deeper roots of this issue, digging back into Lin’s adolescence and charting his high school career, which culminated in an unlikely state championship over perennial California powerhouse Mater Dei. For his efforts, Lin received no NCAA Division I scholarship offers of note. Attending Harvard, Lin then starred for four years and helped lead his squad to numerous school records and upsets. For his efforts, Lin went undrafted by the NBA. Working out as a free agent for the Dallas Mavericks and other teams, Lin was eventually signed by his hometown Golden State Warriors, but didn’t see the court often and ping-ponged back and forth between the NBA and its developmental league. All along the way, Lin struggled with perceptions of what the ceiling of his talents might really be. “Linsanity” gathers thoughts about these impediments, both outwardly manifested and internalized, and casts them in interesting relief.

Most of all, though, “Linsanity” is just fun. There are plenty of amusing anecdotes herein (Lin talking about asking then-Knicks coach Mike D’Antoni about whether he should ship out his car to New York, or continue to take taxis everywhere), as well as old home movies and piano recital footage, and candid personal bits that most newly famous personalities would blanch at sharing. (In reminiscing about his favorite childhood blankets, Lin ranks Lion King just ahead of Garfield, with a deep sincerity). “Linsanity” reveals a lot about not only its subject’s journey but his inner life, which makes one happy for Lin’s success even more. In an era of carefully scrubbed, homogenous sports personalities, here’s a guy not afraid to open up about his self-doubt and the twin pillars of faith and family that helped him persevere. 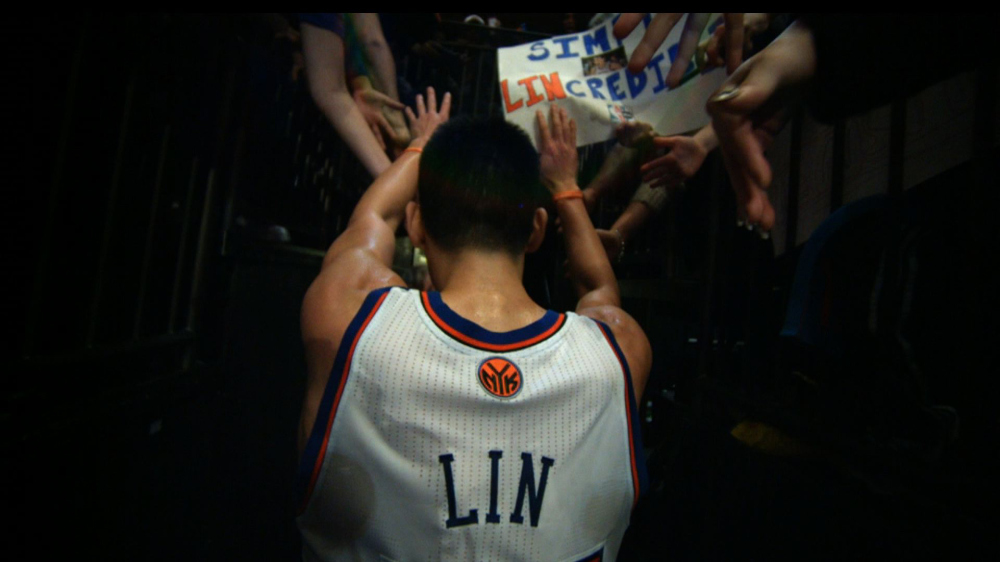