All Is Lost Movie Review

Title: All Is Lost

“All Is Lost” features Robert Redford as an unnamed man indulging in some alone time on his yacht in the middle of the Indian Ocean. While asleep, his boat collides with a stray shipping container, causing the vessel to take on water. As time passes and his situation worsens, the man is faced with a barrage of decisions that will determine whether he’ll stay afloat and alive.

Lost at sea, lost in space, lost in the mountains, lost wherever movies come with an inherent connectivity. As long as the piece is mildly successful, it’s a thrill to watch a character try to figure out how to defy the odds and survive, and then to wonder how you’d fare in such a situation. While “All Is Lost” does bear that quality, it also suffers a major disconnect due to insufficient information.

Not only does the man go unnamed, but he also moves through the narrative with little to no character development. You get a sense of his sailing capabilities and his drive as he fights to stay alive, but you never find out what he’s got to live for and that significantly weakens the impact of his story.

We meet “Our Man” the moment he wakes up and sees water rushing into the boat. That immediately makes you wonder, what’s he up to? Is he on vacation? Why is he alone? Is he running away from something? Those questions can go unanswered for quite some time, but after seeing the man try to fix the boat, pump out water, and push through some nasty weather, it comes time to get some answers and, unfortunately, we don’t. Instead, the man just goes through another vicious cycle of bad luck. He runs into a new problem and tries to come up with a way to fix it over and over again.

Even though it’s very repetitive, for the most part, the action is compelling. Redford has no trouble commanding the screen and delivering a palpable performance, and then J.C. Chandor, his cinematographers, production design team, sound department and visual effects artists step in to amplify Redford’s work further by constructing a multidimensional, fully realized world. The camerawork is incredibly fluid, which is quite the feat considering the focus is on one subject in one location. Again, even though the man’s efforts to hold strong grow tedious, the visual representation of that struggle is quite the opposite thanks to a keen attention to detail.

Between the weathered appearance of the exterior of the boat, the increasingly worn look on Redford’s face, and the wide variety of personal items floating around the yacht hull, there’s always an abundance of visual details to track down and consider. Adding yet another layer to the environment is the stellar sound design, the swishing of the ocean water making for the boldest component, successfully conveying the sensation of feeling surrounded and trapped.

The trouble is, no amount of world building can make up for the lack of sailing information. Somewhat similar to “Margin Call,” Chandor assumes his viewer has adequate knowledge of the subject matter. The man in “All Is Lost” is no expert himself, but he is a skilled sailor. When disaster strikes, he takes a moment to think, but then jumps into action, performing a string of tasks without a single explanation. Eventually you do learn the end result of a particular chore, but while he’s doing it, it’s tough to care because you’ve got no clue what he’s striving towards. And this make the film’s repetitive nature even more damaging. There are just so many times you can play this game before you lose your patience and the film loses your attention.

But even though “All Is Lost” does slow severely every now and then, the need to know whether or not the man pulls through serves as an efficient supplemental driving force. Yet again, Redford solidifies himself as one of the best of the best while Chandor continues to prove he’s a budding talent well worth keeping an eye on. Should Chandor manage to deliver the appropriate amount of contextual information in his upcoming third feature, “A Most Violent Year,” that one could be the complete package. 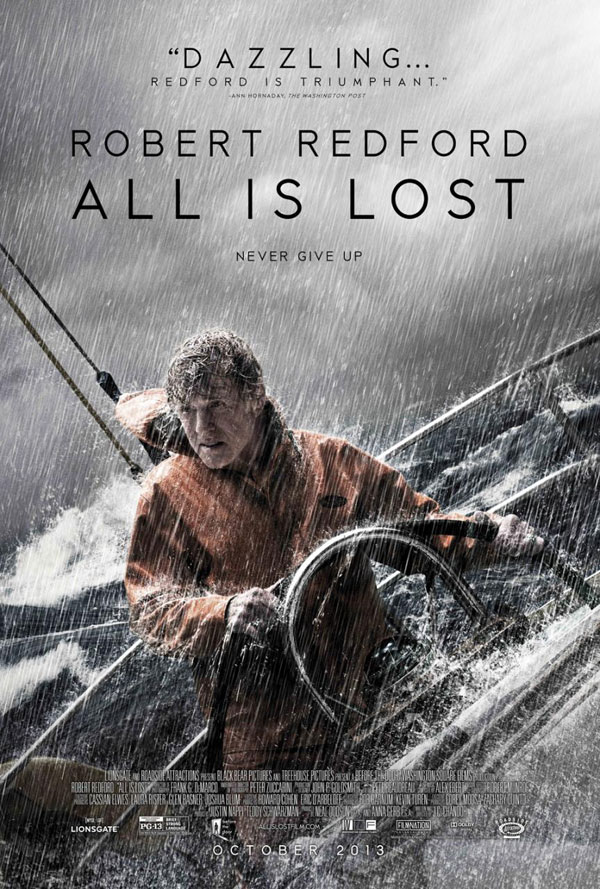