“Nebraska” is packed with hilarious material, but it’s all rooted in a brutally candid presentation of old age, resulting in a unique and especially thoughtful union of quirky comedy and honesty.

Woody Grant (Bruce Dern) is convinced that he won a million dollars. His son, David (Will Forte), points out the obvious – that the letter is nothing more than a scam – but Woody insists on traveling from Billings, Montana to Lincoln, Nebraska to collect his winnings. In an effort to keep his father happy and mentally sound, David hops in his Subaru to take his father on the 750-mile trip, much to his mother’s (June Squibb) chagrin.

Considering the abundance of bogus big money sweepstakes, the inciting incident serves as an ideal starting point. Like David, you know the operation is a cheat, but, at the same time, seeing, “You’ve just won $1,000,000,” in black and white can make your heart skip a beat, granting access to both characters.

David is an everyman. He looks out for his parents, works hard, and does what he can to make himself and those around him happy, making him an easy guy to root for. Woody, on the other hand, is another story. Whether he really is losing his mind or not, he’s still a stubborn guy and his current obsession puts his family in a tough situation. The first glimpse of this older man, shuffling down a busy street, professing that he’s off to pick up his million dollars is amusing, but when he keeps making attempts to sneak off, the joke turns into a scary reality.

Bob Nelson penned a tender, soulful dramedy. There aren’t many emotional highs and lows, rather a steady stream of poignant laughs. It’s hilarious when Woody professes that he lost his teeth near the railroad tracks, but the gag also comes with a degree of sadness because the moment highlights Woody’s drinking problem and the fact that he’s unable to care for himself anymore. Then there’s Squibb’s Kate. She’s constantly verbally abusing Woody and while the habit does produce the large majority of the film’s most unforgettable lines of dialogue, their rather aggressive relationship is also a bit distressing. By maintaining this balance between the comedy and sorrow, Payne and Nelson manage to deliver a film that’s hilarious and thoroughly entertaining, but one in which the jokes never undermine the reality of the situation

That combination also pairs exceedingly well with Payne’s choice to run with the black and white presentation. During a press conference after the screening, Payne lamented that he didn’t have a more comprehensive reason for making that bold visual decision other than “it felt right,” but he is right; black and white does feel right. It may take a moment for your eyes to adjust, but once they do, the gray scale palette pairs perfectly with the film’s tone and shot composition.

Woody, David, Kate, and Ross Grant (Bob Odenkirk) are all grounded characters, but their world is heightened to a degree. From a text and performance standpoint, nobody is striving for laughs, so when someone delivers a very funny line in a deadpan manner, the moment bears an eccentric quality. Then, on the visual side, we get images like the eight-person shot of the Grant family men sitting in front of a TV. Not only is each actor perfectly framed, but they all have these blank stares on their faces. In black and white, that image becomes bleak yet endearingly awkward. It’s almost as if Payne is poking fun at the scenario, but filling it with thought and heart, too, and that’s what makes “Nebraska” such a fresh feeling pleasure.

They’re often insensitive, madcap, and flat-out rude, but the Grants are a joy to spend time with. They all fit into nice, neat little personality boxes to start, but as the film progresses and the scenario becomes increasingly complicated, their decisions reveal new layers to the family dynamic, most of which warm your heart. Between that sensation and the onslaught of effective humor, “Nebraska” becomes one of those films with the power to plant a silly grin on your face from beginning to end, even between the laugh-out-loud-worthy moments.

It’s the optimal bittersweet comedy. On the surface, it’s a straightforward family get-together, making it easy to enjoy, but, at the same time, all the hijinks and misunderstandings are rooted in the woes and/or promise of the family’s past, present, and future, turning it into an especially thoughtful comedy of errors. 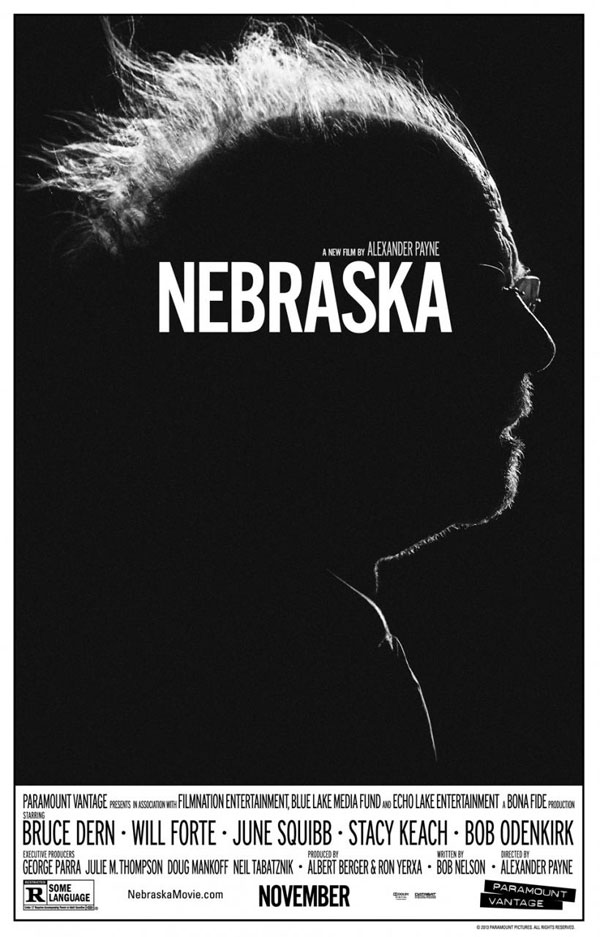