One of the buzziest titles at this year’s Sundance Film Festival, “Escape From Tomorrow” comes to its reputation for dropping jaws sincerely, by way of its guerilla-style production technique. Shot in the monochromatic setting of the Canon 5D Mark II digital camera, debut director Randy Moore’s strange meditation on the inherent phoniness of family mores — part black-and-white student thesis film, part subversive attack on corporate-peddled American fantasy — unfolds in unauthorized fashion at Orlando’s Disneyworld theme park, with a pinch of green-screen assistance here and there. At times legitimately hypnotically alluring, “Escape From Tomorrow” runs out of gas and reaches a point of diminishing return halfway through, give or take, lending weight to the conclusion that this under-sketched expression of paranoia and anxiety would have worked better as a short form offering.

Jim White (Roy Abramsohn) and his wife Emily (Elena Schuber) have brought their two young kids to Disneyworld for a family vacation. What his wife doesn’t know is that, as the film opens, Jim’s been fired from his job by phone. Together they plunge forth into the day. Soon, however, Jim starts noticing all sorts of strange things. When his son skins his knee, a nurse advises that the “cat flu” is going around. As if on cue, Jim starts not feeling well. All this coincides with two giggling, pre-teen French girls (Danielle Safady and Annet Mahendru) who catch Jim’s eye at various park attractions. Soon, this would-be idyllic family vacation unravels completely into a Kafka-esque nightmare.

“Escape From Tomorrow” casts a spell, certainly. Until it doesn’t. The film is meant to be an indictment of the mythology of artificial perfection — the perfectly groomed hedges and magical orderedness of Walt Disney’s kingdom, where everyone is friendly and happy. And the movie’s juxtaposition of private stimuli — of libidinal impulses, shame and disorientation — with public spaces (and an iconic one at that) is heady stuff early on. But the more fantastic and out there Moore’s story becomes, the less interesting and appealing its mode of expression is.

Technically, “Escape From Tomorrow” rates almost two different scores. The bold ingenuity of the basic idea, as well as the level of planning involved in, say, charting the position of the sun in order to be able to shoot outdoors without lights, rate highly. It’s a shame, though, that some of the execution isn’t better. The use of classic Hollywood instrumentation — both by way of composer Abel Korzeniowski’s musical contributions and selected extant cues — gives “Escape From Tomorrow” the feeling of an overly ripe, pungent family drama, making some of its plot twists and turns (better left unrevealed) all the more bizarre. Cinematographer Lucas Lee Graham, too, captures some of the discombobulating visual assault that theme parks offer. But patchwork fixes and set-shot material distract from the storytelling, suggesting a less acute sense of continuity than one might initially suspect, even grading on a curve.

Narratively, the film is even more problematic. Early on, when concentrating on the White family and Jim’s henpecked unhappiness, Moore deploys some of the poses of Sirkian melodrama, along with stabbing, migraine-style dashes of surrealism and horror. It’s here that “Escape From Tomorrow” is most gripping, implying deep, roiling reservoirs of barely subjugated discontent, for the White family and theme park employees alike.

But as it becomes more literal it stumbles, and in the end the movie falls off a cliff. As it pivots into psychosexual intrigue and then bonkers sci-fi territory, its moves begin to feel increasingly arbitrary (uneven acting doesn’t help), and the product of knee-jerk authorial “stances” rather than anything that flows naturally on screen. There’s no doubt that there’s the germ of a worthy idea here, as well as an active imagination. And the mode of its telling engenders both awe and sympathetic, underdog identification, in equal measure. “Escape From Tomorrow” is a film rich in feeling, and something I wanted to like a lot more than I did. But there’s also no escaping the feeling that Moore’s film is a half-baked artisanal expression of frenzied repression, neuroses and angst — a capitalized Cinematic Statement without benefit of a cogent argument.

NOTE: “Escape From Tomorrow” opens this week in over 20 markets, and is also available across various VOD platforms, including iTunes, YouTube, Vudu and more. For more information, visit www.EscapeFromTomorrow.com. 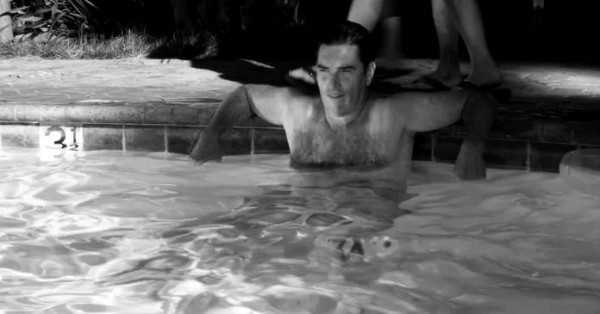