Followers of the politically conservative Tea Party are more likely than most others to be opposed to gay marriage and to the gay lifestyle in general. Many of these folks may find watching “Dallas Buyers Club” to be an unpleasant experience, given the scenes of a gay bar, a prominent actor in the role of a trans-sexual (or transvestite), and support groups for people afflicted with HIV or full-blown AIDS. Ironically, though, Tea Party people will support the struggle of one person with HIV to find a treatment for his affliction beyond road blocks by establishment doctors and particularly the Federal Drug Administration (FDA), the latter group doing its best to red-light drugs that could have a positive effect on the illness. This is because of the Tea Party’s small-government ideology, its mistrust of the agencies of the federal government in particular. These conservatives may well cheer the trials of a man who has no use for the FDA and who thinks outside the box by going to Mexico, Japan, Israel and the Netherlands to accumulate unapproved drugs that might have a favorable effect on the disease.

“Dallas Buyers Club” is inspired by Bill Minutagio’s lengthy article published in 1992 by the Dallas Morning News about a real person, Ron Woodroof (played here by Matthew McConaughey), who it not only a hero to the HIV/AIDS community but who is redeemed a result of his illness. If McConaughey is barely recognizable from start to finish, that could be because he lost thirty-eight pounds for the role, transforming him from the comely metrosexual type he portrayed together with Scarlet Johansson in commercials for Dolce & Gabbana into the sickly pale, anemic Woodroof in the film.

As for Woodroof’s character, he is introduced as a gambler, a drinker, a cocaine user and a sex addict who has little trouble coming up with women for his lust—as we see early on at a rodeo when he pleasures a woman and himself standing up while shaded by some wooden boards. Like some of the good ol’ boys he hangs with, he has no use for “faggots,” but all this is about to change soon after he is diagnosed with HIV, given thirty days to live, and almost attacks the doctor for implying that he is homosexual. The year is 1985: doctors apparently do not realize that a man can acquire HIV through sexual contact with infected women. They therefore make Woodroff furious for the implication that he is gay.

Woodroof goes quickly through the Kübler-Ross stages of grief: denial, anger, bargaining, depression and acceptance. He is applauded by HIV-positive men for giving them hope through alternative drugs and herbs and cheered as well by Dr. Eve Saks (Jennifer Garner), a doctor in a Dallas hospital who in stages empathizes with the work that Woodroof is doing to skirt around the FDA prohibitions. He continues throughout the story to drink, snort, smoke and get into fistfights, but no more women. When he meets Rayon (Jared Leto) in the hospital, he at first pushes the trans-sexual away, given his homophobia, but predictably, he changes to embrace the man and to make sure that his homophobic cop brother (Steve Zahn) extends his hand to shake the one offered by Rayon.

I’m not a gambling man like Woodroof, but I’ll wager any time that McConaughey will be one of the five nominees for best actor not only at the Oscars but among the many guilds including Golden Globes that are an annual tradition with cinephiles and ordinary folks alike. It’s not just that he went through the rigors of losing those thirty-eight pounds, which presumably he put back in time to take the role of Mark Hanna in Martin Scorsese’s “The Wolf of Wall Street.” (Or perhaps he went through that role before that of Woodroof.) Jared Leto, a shoo-in for a nomination for best supporting actor in the role of Woodroof’s number one pal, could be credited with helping to motive McConaughey’s performance. The two share palpable chemistry. Speaking of being unrecognizable, Leto, in a low-cut dress and a fashionable wig looks hot: if you didn’t know him, you might not figure out his gender.

“Dallas Buyers Club” is in a way a follow-up to last year’s fantastic doc “How to Survive a Plague,” about a group of citizens who demonstrate forcibly to push the FDA into speeding up the approval process on HIV/AIDS drugs. Director Jean-Marc Valée, whose 2005 film “C.R.A.Z.Y” deals with a sexually confused boy who tries to live up to his traditional father’s ideals, gets the title of this movie from the club that Woodroof sets up to deliver alternative drugs, herbs and vitamins to subscribers at $400 a month—the pills are free. Woodroof has to fight with not only the F.D.A. which to this day drags its feet on many drugs (perhaps because of the Thalidomide disaster) but also with the I.R.S. that seeks to confiscate the man’s thousands of pills, leading him to sue the agency in San Francisco federal court. This riveting movie earns the attention that audiences will give it throughout its almost two-hour running time. 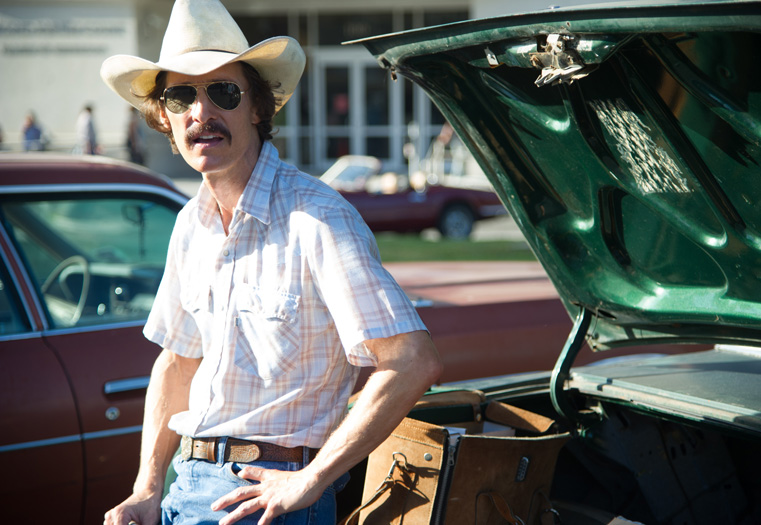