The American 3D computer-animated buddy comedy will be the perfect film-treat for Thanksgiving. ‘Free Birds’ was in fact originally titled ‘Turkeys’ and focuses on the dilemmatic fate that touches these animals every forth Thursday of November (in the United States, and on the second Monday of October in Canada).

In 1621 the Pilgrim Fathers, who left England, arrived in the New World in Plymouth, Massachusetts. Winter was jeopardising the harvest in a wild land where seeds didn’t seem to take root. The continent was inhabited by natives who taught the pilgrims what products to cultivate and which animals to breed: corn and turkeys. As a sign of gratitude to the natives, the pilgrims decided to introduce a day of Thanksgiving to God, for the overcome famine, to which they invited the native Americans. This traditional feast, each year involves the killing of millions of turkeys, since this is the main dish accompanied with cranberry sauce and pumpkin pie.

‘Free Birds’ is the revenge of turkeys over mankind: Reggie (the turkey pardoned by the President of the United States) and Jake (the turkey who stands up for the Turkeys Liberation front), team up and travel back in time  to the very first Thanksgiving and change the course of history by getting turkey off the menu for good.

Director Jimmy Hayward has co-written, with Scott Mosier, an irreverent, hilarious story that doesn’t spoil the traditional feast, nor questions whether its origins are connected to the colonists’ sense of guilt for having taken the land from the natives. It’s all about the turkeys and their fantastic adventure to avoid becoming the traditional holiday meal.

Throughout the plot there are several references to fairytales, literature characters and old movies, scattered here and there with great skill and artistry. The Ugly Duckling-Reggie, finds his path to herodom, despite the odds don’t seem to be on his side. But as Annie Oakley sung in the Broadway Musical ‘There’s No Business Like Show Business,’ the show must keep going on: the appropriate lyrics that pertinently portray the expected flop with a pun are “Even with a Turkey that you know will fold.”

Reggie and Jake’s show, and the ball they must keep rolling, is an outright mission to save their poultry specie, just like in the ‘Last of the Mohicans.’ Some ‘Back To The Future’ elements will be crucial to accomplish their goal: several “past Reggies” will alert on what actions to take. Along the way some adventurous hill tumbles in the style of ‘The Princess Bride’ will intertwine with the turkey-hunter-villain tossed in the sky on a cannon ball just like Baron Münchhausen (but in this case he also brings the howitzer with him) and with the romantic Aladdin-Reggie attempts to gain the trust of his beloved turkey-chick Jasmine-Jenny, while they are hand(wing)-in-hand(wing) and their love-dove-turkey attachment blooms.

This extraordinary animation comedy makes an amazing mishmash of stories, frames and dynamics that we have all grown accustomed to through literature and cinema, delivering an entertaining holiday movie. The question is whether this movie will shake up Americans to go “cold turkey” on the traditional Thanksgiving meal in the name of ‘Free Birds. 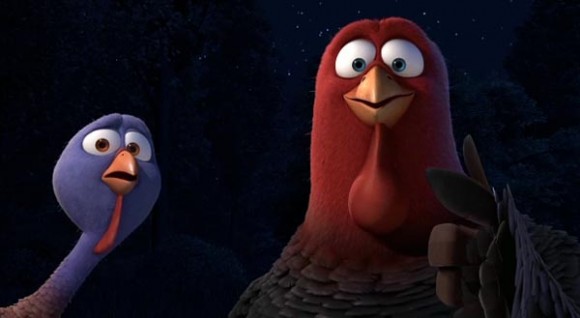