It’s 2046 in the state of what used to be Missouri. Over the past 30 years, several alien races (known collectively as “The Voltans”) have arrived on earth and terraformed the landscape, bringing new plant life and creatures that have improved and also devastated the land.  Former Marine, Joshua Nolan (Grant Bowler) and his adopted Irathient daughter Irisa (Stephanie Leonidas) are scavenging wreckage and barely escape with their lives when they are rescued by members of the town of Defiance (formerly St Louis). The town has just been appointed a new mayor, Amanda Rosewater (Julie Benz)  whom is still getting acclimated to her new position after Mayor Nicky (Fionnula Flanagan) retired.  Both Nolan and Irisa earn their place in the town by helping the humans and the Voltan residents of Defiance fight off an attack by the Volge, an alien race that threatens all forms of life; after which the mayor appoints Nolan the position of Lawkeeper and Irisa his deputy.  The two must learn the ways of the Castithan’s and tolerate their controversial religious customs, but also help keep the peace between the richest Castithan family – Datak Tar (Tony Curran), his wife Stahma (Jaime Murray) and son Alak (Jesse Rath) and the humble human McCawley family- Rafe (Graham Greene), son Quentin (Justin Rain) and daughter Christie (Nicole Muñoz). Both families are having a sort of Montague/Capulet war over their children Alak & Christie who have gotten engaged. Alak Tar DJ’s the Defiance radio station at the top of the Gateway Arch and gets a lot of flack from his dad for acting too human. After a hard day’s work, most of the characters head on over to the “Need Want” where they can get a drink or buy some time from a prostitute. Nolan has his eyes on proprietor Kenya Rosewater (Mia Kirshner), the sister of the mayor.

To those not in the know, Defiance has a tie-in MMO video game, which is covered in the special features section. It’s not one I would play myself, but it’s cool for the fans of the show to be able to interact with the characters.

I watched this show half-assed when it was airing earlier this year, while my significant other raved about it.  After sitting down for a marathon to get this review completed, I actually got into it as well. The writing is good and the characters are fun. There’s just enough alien races to not get overwhelmed, and the storyline is easy to follow if you just happen upon an episode mid season. 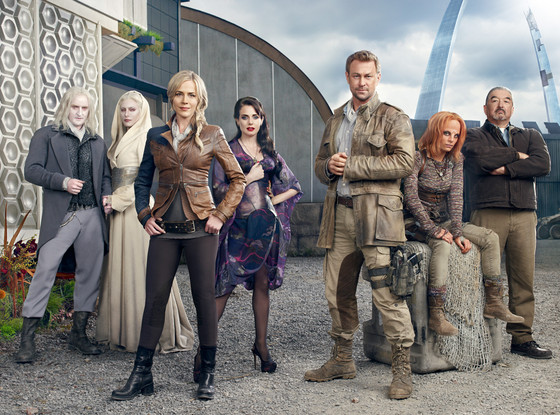